Once a cheap street treat, the ice cream sandwich is now considered a “novelty.” This is quite an accomplishment as the history of the ice cream sandwich paints a much humbler beginning. According to several food history sources, the popular sweet delight was introduced in the late 19th century and was sold to the “common folks” for no more than a penny. Today, brands capitalize on nostalgia to develop different forms of ice cream sandwiches, and the treat is so popular that it has its own National Holiday on August 2nd! 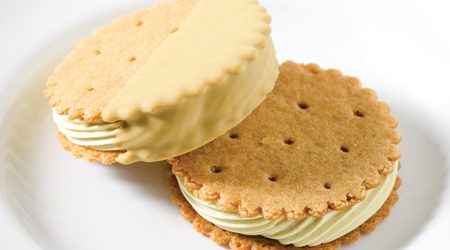 A Little Bit of History
By the end of the 19th Century, ice cream was so popular in American society that many inventions emerged. According to the Joy of Baking, the 1920s saw the first chocolate-covered ice cream bar, also known as Eskimo Pie®, the now-famous banana split, ice cream cakes in many forms and the ice cream sandwich.

Even if the true origins of the ice cream sandwich remain blurry, Jeri Quinzio says in his book Of Sugar and Snow: A History of Ice Cream Making that it was seen for the first time in New York City in 1899. The treat back then differed a little bit from what you think of the ice cream sandwich today both in its simplicity and its price. As the story goes, a pushcart peddler was selling ice cream sandwiches in the street as an innovative solution for ice cream lovers to enjoy their favorite dessert on the go – he simply put a scoop of ice cream in between two graham wafers. The idea behind the creation of the ice cream sandwich was to keep your hands clean. At that time, the ice cream sandwich man, who sold these treats for only one cent to the crowd, became a source of attention to a large audience, including journalists. In the summer of 1900, the New York Tribune dedicated a whole column to the vendor.

The success of the ice cream sandwich was so great that a single man could not respond to the growing demand in New York, and other cart vendors started to imitate the creation and spread the concept throughout the country.

Evolution & Recent Developments
Moving into the 20th Century, in 1977, Richard E. Lamotta invented the “Chipwich,” an ice cream sandwich made with chocolate chip cookies which quickly became very popular, according to The Dictionary of American Food and Drink by John Mariani. In 1987, U.S. scientists created freeze-dried Space Bar Ice Cream Sandwiches that featured ice cream frozen to a solid -40°F. According to Nitro-Pack, the sandwiches were used by NASA during the Apollo space program. Today, the ice cream sandwich is a very popular dessert that can be found on restaurant’s menus, mom & pop shops, food trucks or simply in anyone’s kitchen, as the preparation does not require vast culinary skills.

Recent innovations in the U.S. that fall into the ice cream sandwich category include all sorts of creative flavor combinations, cookies, macarons, chocolate cakes, donuts and decorations to satisfy all taste buds. From flowers to herbs and spices, the ice cream sandwich leaves open doors to inspiration and original creations. The now-famous Holey Cream, for instance, that gave its name to many ice cream parlors and restaurants in New York City, combines two scoops of ice cream – choose from red velvet cupcake, cheesecake, dolce de leche, S’mores or pretzel flavors – into freshly fried donuts. Another trending original combination that you can try in Petrossian cafés and restaurants is the foie gras ice cream sandwich where creamy foie gras ice cream is pressed between two gingersnap cookies or thin-sliced brioche topped with raspberry jam and sea salt. Two other favorite ice cream sandwiches, spotted in California and listed as “America’s Most Outrageous Ice Cream Sandwiches” by The Daily Meal are the Banana-Rum Ice Cream Sandwich made of banana bread and banana rum ice cream — and Blu-Laventine, which includes snickerdoodle cookies and blueberry lavender ice cream. Spices as much as flowers and herbs have been an increasing trend in desserts within the wave of ethnic food and constitute a very original and surprising sensation in between two cookies or inside a warm brioche bun. And if you are worried about your diet restrictions, you will be relieved to know that you can also find dairy-free options such as the Vegan S’mores Ice Cream Sandwich.

Inspired from other Italian culinary offerings, the Panini Gelato is a new sandwich option that consists of a sweet bun and a scoop of gelato heated to perfection in a special Panini press machine. The treat is gaining a lot of attention as the concept combines a favorite and typical Italian fast-food snack – the Panini and ice cream – to create a delicious dessert that can also be enjoyed on the go. Flavoring can be added with fillings and sauces to realize an elaborate delicacy or to create fancy combinations. 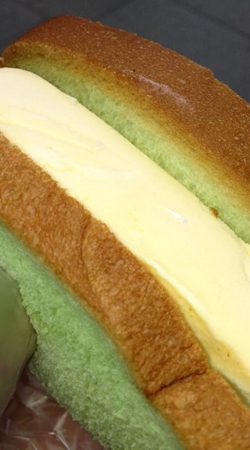 The Ice Cream Sandwich Abroad
The ice cream sandwich takes many forms and is not exclusive to the U.S.; www.Taste.au gives many Australian recipes and explains the origins of the treat which was once known as a “cream between.” Consumers would purchase a small block of ice cream surrounded by paper to place between two wafers. The nostalgic favorite now holds the commercial names of Giant Sandwich or Monaco Bar.

The Vanilla Slice is the classic ice cream sandwich in New Zealand. It is sold as a small wrapped slice of vanilla ice cream that comes with two pink wafer biscuits. The Singaporean ice cream sandwich, a popular snack often referred to as “potong,” which translates “cut” ice cream, is sold for $1 SGD (about $0.60 US); and according to Follow Me Foodie, carts can usually be found in popular areas such as Orchard Road, Chinatown and outside schools. Common flavors of these snacks include ripple, yam, sweet corn, durian, honeydew, peppermint and chocolate chip. Ice cream sandwich vendors also sell the same concept of ice cream on a slice of multicolored Pandan bread to replace the wafers with an Asian Napolitan-style ice cream (chocolate, strawberry and sweet corn) on top. Manila Spoon, a blog dedicated to food in Philippines, talks about these local pushcart sellers travelling around the cities who offer ice cream sandwiches made of a bread called Pandesal, highly appreciated during the traditional mid-afternoon meryenda (snack). In Scotland and Northern Ireland, ice cream sandwiches are made of chocolate wafers and vanilla ice cream and referred to as “sliders” by locals. An Italian-style meringue variation of it is called the “double nougat” where the ice cream is sandwiched between two nougat or “gold nuggets” wafers with edges covered with chocolate and sprinkles.

Whether they are made with cookies, cakes or wafers, including traditional or innovative flavor combinations, these delicious ice cream sandwiches from around the world are a reinvented treat that still holds a promising future. Adapted for all cultures, tastes and food diets, this simple treat satisfies all generations who take any occasion to indulge in this not-so-new but beloved novelty.