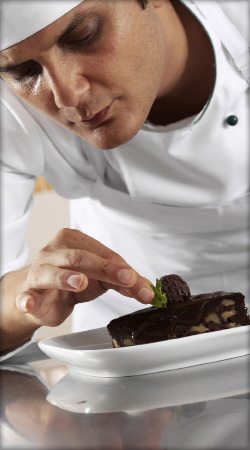 A closer look at the BIG trend of reinventing classic desserts

As a professional marketer in the food industry, researching and reviewing the major trends in the industry and evaluating their staying power is a part of the everyday job. There are many trends that come and go like the seasons, while others are staples year after year, and even decade after decade. “Reinventing the Classics” is one trend that seems to be headed for the latter as Americans’ desire for classic foods carries as much vigor as their love for iconic and timeless songs such as “Respect” and “Free Bird.” With traditional American foods such as brownies and ice cream continuing to generate large sales, chefs are finding that by evoking an “if you can’t beat it, join it” attitude, they, too, are able to capitalize on the trend.

It’s no secret that childhood desserts are what Americans want. Chocolate ice cream is still the favorite flavor, donut sales are soaring, and everyone loves Grandma’s old-fashioned chocolate chip cookies. On the restaurant scene, chocolate cakes and apple crisps continue to outsell more modern and exotic dessert options. But let’s be honest, not everyone wants the same thing over and over again, and there is something to be said about new and exciting desserts. The solution lies in the creation of desserts that have a classical feel and familiar taste, but also have a modern spin with various creative enhancements.

PreGel’s Corporate Pastry Chef Frederic Monti focuses his column in Pastry & Baking North America on this exact concept. The column called “Tempt Your Limits” features seasonal desserts that have evolved from a traditional treat. Recently featured was an Orange Cream Vacherin based on the popular Creamsicle®. Chef Monti explains, “playing with flavors that the American palate has held sacred for many years can lead to a very successful dessert.” And there are many ways to play with flavor, texture and appearance to accomplish this.

Enhancing flavor and/or texture can breathe new life into time-treasured sweets. From adding strawberry and pistachio flavoring to panacotta, to sprinkling sea salt on top of chocolate ice cream, a slight enhancement can renew consumers’ interest and excitement for their all-time favorite desserts. Texture can also be added in a number of ways – simply frying a dessert, for example, adds a crunch component to a classical favorite such as cheesecake. Textures complement one another best when they are dissimilar, such as crunchy nuts in a soft, gooey brownie or a crispy oatmeal topping with baked fruits. Whether big or small, subtle additions here and there can really spice up and invigorate a simple dish.

Flavor substitution is another way to provide a modern touch. Fans of traditional chocolate molten cakes are opening their arms to caramel and peanut butter molten cakes. Adding a popular flavor such as coffee to a classic crème brûlée is, in the words of Emeril, “kicking it up a notch.” Some chefs are even taking beloved childhood and savory flavors and translating them into desserts. StarChefs.com recently posted an article on Chef Gabriel Bremer of Salts in Cambridge, MA, and his peanut-butter-and-jelly-inspired dish. Chef Bremer assembled a plated dessert with a grape sorbet served between two slices of melba toast and a bowl of peanut butter powder. The ingenuity of Chef Bremer’s dessert and the ability to bring back childhood memories express the exact idea of the trend. On the savory side, more and more chefs are adding components to their desserts that are traditionally seen in appetizers and entrées. Savory Sweets, a book written by Chef Amy Felder, CEPC, pays tribute to the many options savory ingredients offer desserts. Capitalizing on the success of the sweet potato pie dish traditionally served at Thanksgiving, Felder molds the dish into a dessert by creating a sweet potato mousse served with a walnut sorbet, curry maple reduction and an oatmeal lace cookie. Adding the unique flavor of sweet potato to the mousse instantaneously creates something different but familiar to the American palate.

Deconstruction is another way to embrace the call for sweet reinvention. Deconstruction, which is a trend in itself, separates the key elements of a dessert in an attempt to create an experience where the consumer interacts with the dessert, piecing it back together to get the same taste and delight that a finished dessert would yield with a little bit of customization. However, the key variable here is that each element must stand alone on the plate; therefore, creativity, texture and taste must be carefully evaluated. A deconstructed fruit tart provides a perfect example. Each element is carefully crafted – a flavored tart shell, a flavored pastry cream, fruit sauce and a fresh berry compote – and all are presented on plate, but separate. All parts can be consumed alone, but are better when put together based on the consumer’s preference (i.e., adding more pastry cream, using less tart shell, etc.). Deconstruction offers a great opportunity to customize each component of a dessert; however, the taste must be as good and fulfilling as the original dessert – or better – for ultimate success.

Having explored a deconstructed fruit tart, now channel a fruit tart gelato – think of a forest berries-flavored sorbetto with pieces of tart shell and fresh berries swirled throughout and topped with berry compote. Just as delicious but offered in a whole new way. This is an example of how “Reinventing the Classics” can also take the form of morphing one dessert into another. Who says you can’t have an apple streusel cupcake or a key lime cookie? In the hands of the right chef, anything is possible.

Whether preparing a delicious German Black Forest cake or a classic apple pie, remember that yesterday’s cake could become tomorrow’s cookie. Starting with the foundation of a classic dessert will almost always entice consumers and jog pleasurable memories that keep them wanting to relive that particular experience. It is nostalgia that sells these deliciously transformed desserts. With countless opportunities to “Redefine the Classics,” there’s no better time than now to take advantage of this rousing and profitable trend.