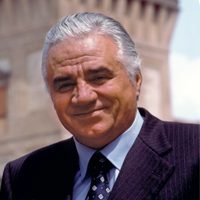 A glimpse into the origins of some of PreGel’s greatest successes.

Potato chips were invented out of an “act of spite.” In 1853, Chef George Crum responded to a customer’s complaints about his potatoes by frying them to a crisp and heavily salting them. To the chef’s dismay, the customer liked them and they soon became a local favorite.1 Like most, you probably never gave the history or origin of the products you eat a second thought. The truth is, behind many of today’s products lie some great tales of their beginnings and how they’ve evolved over time. PreGel’s products have their own unique history which has helped shape the gelato and specialty desserts industry into what it is today.

Luciano Rabboni, PreGel's president and founder is the driving force behind PreGel's many product innovations.

PreGel S.p.A. was founded by Dr. Luciano Rabboni. A natural innovator, Rabboni recognized the need for a gelato product that would last longer and maintain freshness, after seeing gelato street vendors consistently lose money because their product would melt so quickly. In 1967, he succeeded in creating the first semi-finished gelato product. PreGel created a powdered gelato base comprised of natural ingredients, to which only sugar, milk and/or water would be added, allowing for a more simplistic and efficient gelato-making process, without any sacrifice of texture or taste. Creating the bases for gelato was the first step to allow vendors everywhere to provide a consistent, fresh product, but it’s a combination of many products that PreGel has invented over the years that has truly made it an industry leader.

A custard with eggs and sweet Marsala wine, Zabajone is a traditional Italian dessert and one of PreGel’s most coveted flavor pastes. Created in 1968, this flavor highlighted PreGel’s ability to take desirable flavors and desserts from around the world and translate them into gelato. Zabajone is still packaged in the same jars today as it was when it first came off the line in 1968.

In 1970, PreGel became the first company to invent concentrated pastes from the best fruits for gelato and sorbetto. The company named the fruit pastes Fortefrutto® and offered them in a variety of flavors including raspberry, bilberry and mango. The first Fortefrutto® PreGel created was orange, which still reigns as one of the company’s popular flavors. Today, the pastes are used worldwide, and in addition to their traditional use in gelato, the pastry industry has also started to embrace the concentrated flavors, preferring them to other fruit flavorings used in their various recipes for cakes, cookies, mousses and more. Characteristic of the pastes are their intense flavorings, which allow customers to only require small amounts for each batch.

Stracciatella is one of PreGel’s classic product inventions that many consider to be a staple in the gelato and ice cream world. Stracciatella, in its packaged form, is a liquid chocolate paste that, when applied to gelato or ice cream, hardens into a chocolate coating, shavings or pieces, depending on how it’s dispensed. In Italy, Stracciatella gelato is a classic flavor, whereas as in the U.S. this product is more commonly used as a topping for ice cream and gelato. Stracciatella was introduced by PreGel in 1971 at a popular trade show called Longarone and today is still considered an industry innovation.  Stracciatella’s success is credited for inspiring PreGel’s Arabeschi® Line.

Just when the world thought the taste of gelato couldn’t get any better,
PreGel launched Arabeschi®, a topping and filler that enhances the gelato experience further. Stracciatella was the first Arabeschi® the company made available, and the list of products continues to grow. Arabeschi® is different from the various toppings we often see in U.S. ice cream shops as they mainly use popular candies, cookies and toppings such as M&Ms®, whipped cream and Oreos®. Each of PreGel’s Arabeschi® is created to obtain a new flavor and texture when mixed with gelato. The Arabeschi® was an industry innovation; prior to its launch, no one had explored adding texture and additional flavors to the already intensely flavored gelato. PreGel’s most popular Arabeschi® include Coffee Crunch, a chocolate sauce with a coffee-flavored crunch; Fragolissima, a strawberry sauce with pieces of whole strawberry;
and Donatella Rock, a chocolate sauce with hazelnut-flavored crunch.

The slightly tart and refreshingly healthy treat of frozen yogurt that has been taking the U.S. market by storm the last few years has actually been around longer than originally thought. While many dabbled with yogurt in the 1970s, PreGel introduced its world-renowned gelato-flavored yogurt formula, Yoggi 30® in 1985. While the flavor met reasonable success in the 1980s, the trend quickly passed – until its recent resurgence over the last few years. The New York Times recently attributed Rabboni and PreGel’s gelato-flavored yogurt as one of the reasons frozen yogurt has created such a huge following, saying that PreGel perfected the formula. Forbes.com and Entrepreneur magazine have both listed frozen yogurt as one of the hottest trends in the industry and PreGel’s Yoggi is one of the company’s largest sellers.

PreGel recognized the need to offer the fresh taste of tiramisu in gelato form, another dessert favorite around the globe. Replicating the delicious taste of coffee-soaked ladyfingers with mascarpone in gelato was no easy task; but sticking as close to the classic recipe as possible, PreGel was able to capture the taste well in a single bite of gelato in 1985.

Gelato requires the use of milk or water over cream in its process, which allows its butterfat content to remain low, and is one reason why it’s considered a healthy dessert alternative. PreGel discovered a way to make gelato even healthier when it introduced its Wellness Line in 2006. PreGel secured exclusive partnerships with Splenda® Brand Sweeteners and Beneo™, which allowed the company to produce gelato enriched with fiber and significantly fewer calories (learn more about Beneo™ here). Offering Splenda® products was also an innovation for the company as it could now cater to the special dietetic needs of consumers as well.

PreGel’s product successes and histories span well over 40 years. Each and every one of its products has a history from the finest ingredients used, to the creation of new forms of traditional desserts, to perfecting formulas. Not to be outdone, PreGel’s Research and Development Department continues to search for new innovations to lead the industry and continue to add to its unique history.  Next time you dig into a spoonful of Stracciatella, you’ll now know its story.