PreGel continues to expand its presence around the world, and the latest is in Latin America with facilities, training programs and a network of distributors. The company recently opened a warehouse in Colonia, Uruguay, and is planning on launching one of its Professional Training Centers as it reaffirms its commitment with education and betterment of the industry in the region. Although this is the most recent news; a man has been hard at work for the last couple of years leading the way in South America for the company. His name is Pablo Dell’Aguila, a charismatic Argentinian who couldn’t be more passionate about gelato.

As we Skype from opposite sides of the equator, Dell’Aguila sips on a hot yerba mate tea, a traditional beverage that helps him keep warm as the South American winter is in full swing. (South America is on opposite seasons from the U.S.) Listening to his life experiences is fascinating, and you can really learn just about everything there is to learn about gelato by chatting casually with him. He has been in the industry for more than 23 years and has an amazing knack for teaching. Dell’Aguila possesses the unique ability of being able to internalize the very specific knowledge and techniques that the frozen dessert trade demands and simultaneously externalize them fluently by explaining it all in a simple and structured manner. 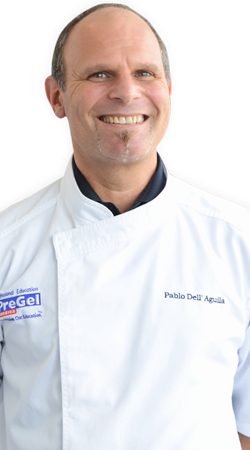 Dell’Aguila was introduced to gelato at the tender age of 15 in the Mar del Plata region in Argentina, a country where a big part of the population – as is the case for Dell’Aguila – is of Italian descent. Italian customs and traditions are still present in a country where gelato is ingrained in the culture. Dell’Aguila learned the processes and methods from “La Vieja Escuela” – meaning gelato’s old school way of doing things. Soon after, he crossed the Atlantic Ocean to work in a couple of gelaterias in Germany, where Italian gelato is also deep-rooted in everyday life. The culture shock was tough, as he had to learn the language and absorb as much as possible by observing the more advanced preparation methods of the Bavarian country.

Dell’Aguila recalls that he had to relearn how to make gelato the hard way. “I had to learn with my eyes. Nobody explained to me any of the preparation methods. Back then you had to learn by watching and by trial and error.” Dell’Aguila quickly caught up and rose to managerial positions during his nine-year European stay. This was when he first came in contact with PreGel products.

“PreGel left a mark on my life. I was introduced to PreGel products in 1991 in Germany,” recalls Dell’Aguila. “I used to spend a lot of time in the lab back then and found a true ally in PreGel.” He explained how the products’ advanced solutions allowed him to be more efficient in the lab while obtaining spectacular results in the gelato case.

“In Germany, I first discovered Lemon 50, Yoggi 30® and the handiness of working with a PreGel base and Vellutina®.” Dell’Aguila concludes that during his years in Germany he learned with the best when it comes to gelato and had the chance to work with the top gelato masters in the world.

Upon Dell’Aguila’s return to Argentina, his experience and know-how was sought after by many businesses since he was, and still is, years ahead of the industry’s general practices. As a gelato maker, Pablo believes that his biggest reward is the client’s happiness and satisfaction, and now as PreGel’s technical sales representative, he continues to experience a similar feeling as he helps launch successful businesses throughout South America. “My job’s biggest reward is when a person becomes so passionate about the frozen dessert industry without having any prior knowledge to it,” explains Dell’Aguila. “Beyond sales, when clients call you and thank you for your service, it creates a stronger bond.” Dell’Aguila also added that he is a strong believer in the service he provides his clients after they make their first purchase. “It’s up to us that they can reap the maximum benefits.”

Upon Dell’Aguila’s return to his home country, he also started a family with his wife. They couldn’t be more proud of their 13- and 10-year-olds, who play soccer and rugby respectively. Dell’Aguila laughs when I ask him if Franco, his 13-year-old, will be the next Lionel Messi. “Ojalá!” he expresses with a laugh. More impressive, however, is the fact that Bruno, his 10-year-old, plays rugby – an extremely physical sport. “He is as strong as a bull,” expresses a proud father who is not alien to the sports world himself. Dell’Aguila enjoys long distance cycling whenever he gets a chance and has the impressive experience of crossing the Alps three times during his stay in Europe.

Gelato, however, is Dell’Aguila’s greatest passion. He says that in PreGel, he found a huge welcoming family and couldn’t be more excited about establishing a strong foothold in the continent in the upcoming years. Yes, his life story is fascinating, his experience vast and his knowledge among the highest in the industry, but most impressive of it all is how down-to-earth the charismatic Argentinian is.