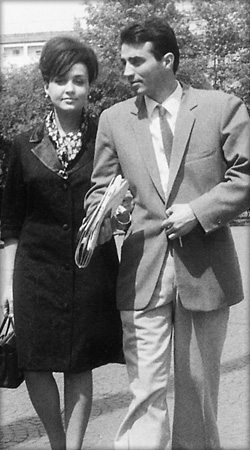 A Story of Great Love, Support and Success

Take a look at the black and white photo from 1967. We see them together, Elena and Luciano Rabboni, taking the first steps of a long journey ahead. A path that was sometimes difficult and often unpredictable, but met with strength and determination, respect and mutual support; and that’s what has kept PreGel’s founding family going all these years.

Elena and Luciano Rabboni in 1967

Elena remembers meeting Luciano just as he is in that photo – young, determined and creative. “He was a brilliant and extroverted guy,” she says, “I realized immediately that I wanted to devote to him all my life.” She put aside her studies and a promising career as a school teacher and made a leap of faith to focus entirely on Luciano, who shortly after would become her husband. “I married a man and his dreams,” she says and then continues, “many sleepless nights passed; we were tormented by economic difficulties and a future that sometimes seemed more than uncertain.” But with a sudden smile she also tells a story of great happiness and love during all these years. “It has not always been easy to stay close to a personality so strong and dynamic,” she admits, “but over time, I realized how to succeed in supporting and reassuring him especially during difficult times.”

At his side, Elena has seen the triumphs and disappointments of PreGel. She was there when Luciano developed the first PreGel products in a small suburban garage. Together, they have traveled thousands of miles on board a Fiat 500 looking for customers. “We unloaded cartons by hand, and we were happy and grateful for the opportunity that we were given,” she recalls. On those cartons was the name PreGel, a company that would become the worldwide leader in ingredients for specialty desserts, but at the time they were content with making one sale.

With the continuous growth of the company, Elena’s insight and intelligence lead her to change her focus from sales to administration. “As our company expanded, I decided to concentrate more on managerial aspects, allowing the creative and entrepreneurial genius of my husband to speak freely,” she says matter of factly. “In a company, it is essential to have different perspectives, which allow you to make objective and functional decisions.” But it is clear that administration was always Elena’s calling thanks to her innate sensitivity which allows her to recognize and deal with complex situations quickly and successfully.

“I wanted to interact with our employees, listen to them and understand what motivates them, but at the same time what challenges and concerns them.” Thanks to her precise attention to details, she has managed to create a corporate culture of customer respect and appreciation that is now an integral and characterizing aspect of the company.

An art lover with a refined aesthetic taste, who has also shaped and developed the image of PreGel from the very beginning, Elena says she “believes that the quality of our products should be balanced by the way we present ourselves.”

Among the latest projects Elena has been in charge of is PreGel’s new Research and Development building, which hosts a series of ultra-modern state-of-the-art demo rooms and the elegant PreGel Hotel: a perfect balance between rustic and modern with custom suites, much like PreGel AMERICA’s new facility. “Construction sites have become my second home. Just as one ends, a new one starts. This is how it is when you live with someone like Lucio; you cannot ever stop. Over the years, I have seen him take many risks, but he has always shown character and integrity and has never disappointed me, and this is why I will support him forever.” Behind that character and integrity there is also the strength and passion of a woman who has taken his good qualities and has made them better – a woman who has fought for and been able to monitor and manage the growth of the company while never neglecting her family.

While Elena has never cared to be front and center, we decided to put her story down on paper, for others to share in the life of this wonderful woman, mother, wife and manager, who has been at the center of PreGel with Luciano. From all the employees, thank you for being a mentor and an inspiring example.

Thank you for being the heart of PreGel.