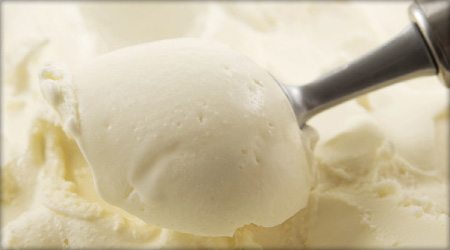 You would be hard-pressed to find anyone in America who doesn’t know what vanilla is. It’s the best-selling flavor of ice cream with a segment share of 27.8%, according to a recent study by the NPD Group.To put that in perspective, the next best-selling flavor is chocolate with 14.3%, followed by strawberry and chocolate chip, each with a mere 3.3% of overall ice cream sales. In addition to ice cream and despite all the options available, 42% of consumers who eat cookies still choose vanilla wafers.

Another study shows that vanilla shares top billing in yogurt popularity (along with plain), outpacing all of the fruit flavors. You can scarcely navigate a market, department store or restaurant without bumping into something containing this prolific little ingredient. But vanilla has become more than just an ingredient; it has transcended from a substance to a concept. So how does a fickle seed pod from a finicky orchid make the jump from mere celebrity to immortality? Over several centuries, vanilla has not only overcome pitfalls such as reproduction and cost, but has won a permanent place in the hearts, minds and mouths of Americans.

Although some believe vanilla and chocolate to be opposites, they actually have quite a bit in common. The flavor of both comes from their seed pod, and they both must be extensively and expertly processed before reaching their consumable form. Prior to chocolate being available as the solid food we enjoy today, Aztecs in the early 16th century used the cacao bean for a rich, but bitter beverage. However, they had a secret ingredient to make the drink sweeter and more palatable – extract from the seed pod of the Vanilla Planifora species of orchid. Vanilla, sometimes considered a spice, is regarded as one of the most expensive and prized culinary ingredients. Today, vanilla is commonly used in extract form – just a few beans can create a large quantity of extract, which translates to an accessible price point for the mainstream consumer. Many vanilla extracts also contain sugar or corn syrup to enhance sweetness and extend yield. Since vanilla extract has become commercially available, the demand for the flavor of vanilla triggered many “imitation vanillas” to enter the market as well. Although cheaper vanilla flavorings are widely available, it is the consensus among dessert and culinary professionals that the only way to achieve pure vanilla flavor is by using the real bean or high-quality extract.

Aptly referred to as “the salt of the pastry world” by Pastry Chef David Lebovitz, vanilla occupies many niches in both sweet and savory cuisine. To some, it is like the soft cotton sheets of a freshly made bed where other flavors are gently cradled. To others, it is a starkly blank canvas where any mark, subtle as it may be, is exposed in full and defined by the white space surrounding it. Then there are those who experience vanilla as a wholly pure sensation to which distraction from the core flavor would be like a fire drill in the middle of yoga class. In order to truly understand why vanilla has earned such a coveted place among dessert and culinary professionals, the flavor, aroma and appearance must all be considered.

It’s a toss-up between taste and smell for the most dominant sense to which vanilla appeals. When we eat vanilla, it is commonly combined with the most palatable things known to man – sugar and fat. Hunger and cravings we experience as humans are closely tied to the need to nourish our bodies, with the most immediate requirement being for sugars (carbohydrates) so they can be quickly digested. Then, of course, fat is another necessary component to our diets and serves the purpose of being an excellent flavor-carrier. Imagine a bowl of vanilla butter cream, whipped up à la minute and served on the tip of your finger. The creamy mouth feel of the icing combined with the sweet, mellow warmth of vanilla is probably capable of seducing even the most stubborn opponent. Not to mention, vanilla is a very mild flavor without any bitterness, tanginess or saltiness that some palates find objectionable. At worst, it can be called boring or bland; but at best, it is nature’s perfectly simple pleasure.

Rarely does one eat anything made from vanilla without first experiencing its intoxicating aroma. Smell is so integrated in our perception of taste that our noses are usually able to detect its presence even before our tastebuds do. As with flavor, vanilla is often a base note onto which other flavors (or scents in this case) are added. Due to its undeniable sweetness, vanilla leans toward the feminine in perfumes and is usually enhanced with herbal, fruity or musky tones, although it also plays a part in masculine colognes when combined with sharper elements like evergreen or sandalwood. Popular fragrances like Valentino for Women and The One by Dolce & Gabbana feature vanilla as a base note, and Hypnose by Lancome features vanilla as a heart (middle) note. In addition, vanilla is commonly used for ambiance in products like room fresheners, candles, aromatherapy oils and potpourri for a calming, comforting effect. If you have ever opened the door to a fine boutique and had a waft of vanilla-fragranced air tickle your nostrils, your olfactory memory may have transported you back to the nostalgic smell of sugar cookies baking in your grandmother’s kitchen. Scent can also be a powerful motivator, and familiar scents like vanilla, citrus or cinnamon are often used by companies to craft an environment where customers feel comfortable, at ease and open to the power of suggestion.

To a different degree, vanilla can also be experienced through sight. Although the orchid is green and the processed bean is brownish-black, white and cream are the colors associated with the flavor and scent of vanilla. When it comes to gelato or ice cream, hue or shade can speak volumes about the variety and quality of the product. A pure, snowy white appearance will most likely indicate a delicate, milky flavor with just a hint of vanilla. The presence of tiny black flecks in your gelato or ice cream comes from the scraping of the inside of the vanilla bean and can mean a more intense flavor. Then there is French vanilla which can range in color from pale cream to a rich, buttery yellow and gets its unique hue from the presence of egg yolks. But don’t judge a book by its cover; vanilla desserts can vary widely, and a peaceful, creamy white exterior may belie an unexpected flavor explosion.

Truly amazing is that as exceptional as vanilla can be, it is still often overlooked. Taken for granted, treated as a nonflavor and described as “blah” – that’s surely no way to regard an ingredient that has brought pleasure to our nation for so many years. Perhaps it is the lack of controversy or maybe our society is just too obsessed with novelty. Either way, there is a certain degree of comfortable grace that comes with continually being at the top of one’s field. Luckily, comfort is a concept perfectly suited for vanilla. •••