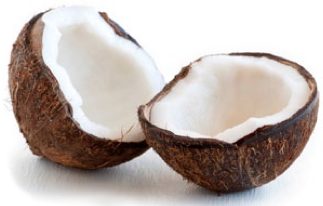 With so many uses for every part of the coconut, there’s no wonder why the coconut palm tree is known as “the tree of life.”1 A widely used fruit, the coconut is a staple food that has sustained many generations around the world.2 The coconut’s meat, milk, water and oil contribute naturally toward health and beauty, and can often be found in many of these type of products, which makes this refreshing delicacy that much more intriguing. 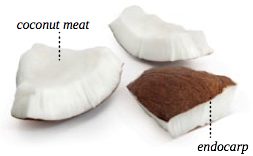 The Anatomy of a Coconut

Due to its hard stony covering, the Library of Congress botanically defines the coconut (cocos nucifera) as
a fibrous, one-seeded drupe fruit.3 However, the institution also affirms that when using loose definitions, the coconut can also be referred to as a nut and/or seed. The coconut has three layers: the smooth, greenish exocarp; the fibrous husk known as the mesocarp; and the hard woody layer surrounding the actual flesh of the coconut, called the endocarp. Generally, most consumers recognize the coconut by its endocarp, as sold in many grocery stores. Quite suitably, this layer of the coconut has been referenced as “monkey face” because of the seed’s brown, hairy-looking texture accented by three germination pores that resemble two curious eyes and a small open mouth known as the “soft pore,” which is the pathway to obtaining coconut water. 4

Coconut Water
The sweet, nutty and refreshing fluid called coconut water is derived from the center of young, green coconuts by piercing the soft pore of a coconut with a knife, drill bit, or any sharp device that will break through the barrier.5

Coconut water is clear in color and is said to assist the human body with fighting a laundry list of ailments including the treatment of hangovers, kidney stones, malnutrition and gingivitis to name a few.6 According to an article “The Truth Behind The Coconut Water Craze,” published by Forbes.com, coconut water is low in calories, naturally fat and cholesterol free, is rich in potassium and super hydrating. In fact, when intra-venous (IV) solution was in short supply during World War II and the Vietnam War, some doctors utilized coconut water as a substitute.7

Additionally, coconut water is a great nutritional supplement for lack of fruit, vegetable or dairy consumption. Coconut water, which can be fermented into wine or vinegar, is also reported to be a very effective natural laxative.

As a coconut matures, coconut water morphs into coconut meat. Coconut meat is the edible white meat of a coconut, often shredded for use in culinary applications such as cakes and curries.8 Generally, the meat is sold fresh from a cracked endocarp, canned or as copra, which is dried coconut meat. Depending on the age of the coconut, the texture of the meat will vary. Younger coconuts tend to produce a gelatinous, jelly-like meat with a light flavor that can easily be eaten from its 9 shell with a spoon. More mature coconuts provide a stark contrast in consistency with firmer, sweeter meat that is rigidly attached to the shell.

In regard to the nutritional essentials of coconut meat, it’s considered a medium chain fatty acid according to Livestrong.com, meaning it doesn’t contribute to high cholesterol, but possibly helps lower bad cholesterol levels and increase good ones. Additionally, coconut meat is high in fiber that provides more than 20 percent of the recommended daily amount for most adults. 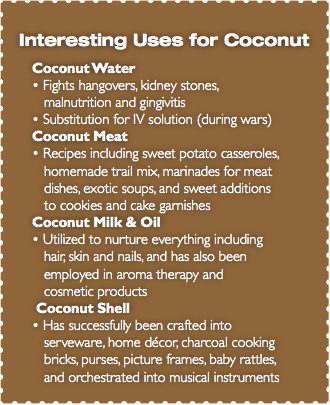 Coconut meat lends itself to a variety of recipes including sweet potato casseroles, homemade trail mix, marinades for meat dishes, exotic soups, and sweet additions to cookies and cake garnishes, but coconut meat can also be to bring forth coconut milk.

Coconut milk is best when produced from coconut meat that is white, thick and creamy.12 The meat is steeped in hot water and strained through a cheesecloth to yield the liquid base for many recipes, one of the most popular being curry sauce. When the first pressing of coconut milk sits, coconut cream is produced, which is great when used in sweet recipes or rich sauces. Additionally, its culinary cousin, coconut oil, is extracted from copra-dried coconut meat and is currently being praised as one of the healthiest oils for cooking, or as a dairy-free replacement for butter.13 Coconut oil has been utilized to nurture everything including hair, skin and nails, and has also been employed in aromatherapy and cosmetic products. Most recently, coconut oil is being explored as a potential biofuel. According to several resources, coconut oil has over 101 cumulative applications for cuisine, beauty and health.

Internationally revered by culinary enthusiasts, and used in a plethora of ethnic cuisine all over the world, the coconut has been employed to enhance flavor, add texture and provide a tropical inspiration to recipes ranging from drinks, cakes, cookies, candies, sauces, pastries, pies, and frozen delights such as ice cream, sorbetto and premium gelato. Beans have basted in its flavor, pineapple has famously merged with its essence and curry dishes have benefitted from coconut’s savor. The tropical powerhouse has proven to be a flavor that can satisfy every aspect of the culinary palate.

Furthermore, the shell of the coconut has successfully been crafted into serveware, home décor, charcoal cooking bricks, purses, picture frames, baby rattles, and orchestrated into musical instruments.14 Even the fibrous husk of the coconut known as coir is utilized to create ropes, yarn, brushes, door mats, heat insulation, mulch for plant growing, etc.

The number of imaginative ways the composition of a coconut can be utilized is amazing. Considering all of the benefits it offers, “the fruit of life” seems to be the perfect description for one of Mother Nature’s most functional foods.

5Rogers, J. (2011).The Naughty Vegan! How to Open a Mature (brown) Coconut! Retrieved February 2013 from http://www.thenaughtyvegan.com/coconut.htm

9Be Healthy With Coconuts…the fruit of life (2012). Coconut Meat Can’t Be Beat. Retrieved February 2013 from http://www.be-healthy-with-coconuts.com/coconut-meat.html

14Coconut museum:The Many Uses of the Coconut. Retrieved January 2013 from http://www.coconut.com/museum/uses.html