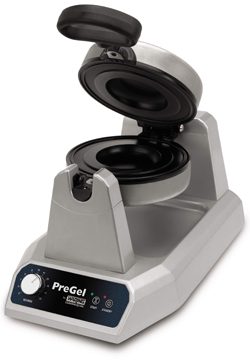 PreGel AMERICA announced its partnership with Waring Commercial to develop a new frozen dessert novelty machine called Gelato Panini Press. This is an unprecedented collaboration for both companies and the industry, as it is the first time an ingredient and equipment manufacturer have joined forces
to create a co-branded machine.

“While equipment partnerships have been and continue to be an important part of our company’s strategy, working with Waring Commercial to build a one-of-akind machine is a new endeavor for us,” said Marco Casol, President and CEO of PreGel AMERICA. “The opportunity to work with such a reputable equipment manufacturer was one we had to jump on. The concept of a Panini Gelato is one both of our companies are excited about.”

The first prototypes of the Gelato Panini Press were debuted at this year’s National Restaurant Association Show at PreGel’s booth #6223. The Gelato Panini Press is a lightweight, easy-to-use machine that toasts and seals a sweet bun filled with gelato and toppings to create a sandwich that’s warm on the outside and cold on the inside. The concept is one for businesses looking to expand their frozen dessert offerings in a new and exciting way. The companies plan to roll out the new machines in the fall.

“We could not choose a better partner in an effort to develop a new dessert category than PreGel AMERICA,” said, Jerry Rutigliano, General Manager and Vice President of Waring Products. “We quickly reviewed this concept and the opportunities it presents and chose to move forward immediately. I believe the two companies will greatly benefit from one another’s expertise to make this collaboration a great success.”

To learn more about PreGel and Waring’s collaboration and the Gelato Panini Press, email marketing@pregelamerica.com.