Whether it’s froyo, gelato or good ol’ ice cream, flavors are becoming more and more unique as the minds of chefs and dessert professionals go wild with endless pairings of all kinds. From ethnic-inspired to savory meets sweet, the ideas are sometimes scary, oftentimes amazing and so out of this world it’s hard to imagine where the inspiration came from.

In my role as marketing manager for PreGel, I spend hours poring over new trends, watching innovative menus emerge from chefs and working closely with our Professional Training Center on development and ideas for recipes. The ideas tend to stay somewhat mainstream, focusing on practical innovations here and there, as we know the ratio of “crazy” flavors to the classics and moderns is very small. Then again, there’s always room for that one out-of-the box idea. So, here’s my list of Top 10 Crazy Flavor Ideas and you won’t find bacon in a single one, because although unconventional – the bacon explosion has already hit with much success. 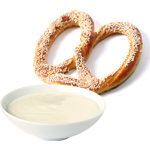 10. Yogurt Pretzel
Ok, maybe it’s not the craziest of ideas, and therefore in the 10 spot and not the first, but chocolate-covered pretzels always triumph over yogurt pretzels. With the success of frozen yogurt over the years and pretzels always being a favorite of consumers, I don’t see why this hasn’t happened yet.

9. Sausage
I said no bacon and I meant it. I think the understated sausage and its many forms are ready to shine in desserts. What we know is that sausage does pair well with sweets. 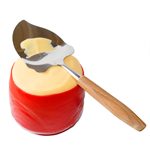 8. Con Queso
Since when is anything with cheese not good? You’ve see cheese-inspired frozen desserts – ricotta, mascarpone, parmesan, cheddar, but why not spice it up with a fiery frozen delight?

7. Cleansing Mix
A body cleanse in tasty frozen dessert form? I would love to walk into a store, order soft serve and know it’s doing my waistline good. Many cleanses come in drink or smoothie form, so why not incorporate some air and make it a dessert. Honey-Cayenne Pepper Lemon Sorbet anyone?

6. Cucumber-Tomato Salad
Both are refreshing vegetables (though I guess the tomato is technically a fruit). I am curious what a sorbet of this type would be like. I might suggest leaving the onions out of the mix, but this could accompany an appetizer or better yet top off a cucumber cocktail or Bloody Mary.

5. Expensive
Technically, there’s not a particular flavor here as the premise is more about what ingredients would create the most expensive frozen dessert in the world that someone would pay for. Would it be the priciest champagne added for an alcohol-infused sweet treat or would it have white truffles for their rare but truly tasty essence? Maybe it’s laced with traces of gold – who knows, it just would be so crazy to see!

4. Roasted Fall Veggie Medley
Pumpkin, Sweet Potato, Squash, Olive Oil – they’ve all proved to make a pretty tasty frozen dessert. Put them all together and see what kind of smorgasbord can be created. Consumers love the fall season, and this would be one scoop of cozy fall goodness.

3. Energy Bomb
A Red Bull®, Monster® and protein-enriched frozen desserts are something unique but not new. How about the frozen dessert that packs the greatest punch of energy out there. Be it the most caffeinated coffee soft serve or Four Loko sorbetto, is there a frozen dessert out there that gives “afternoon pick-me-up” new meaning?

2. Sushi Gelato
Sushi is one of those foods that has become a mainstream part of cuisine in the last 10-15 years in the U.S. We have seen desserts actually transformed and shaped like sushi, but now it’s in actual gelato form. 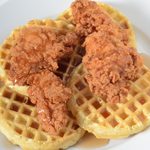 1. Chicken & Waffles
This had to be in the top position, because I am dying to see this happen. Made famous in Cali and by Snoop Dog himself, this combo is everywhere from fast casual to fine dining, so I am ready to see it as a frozen dessert.