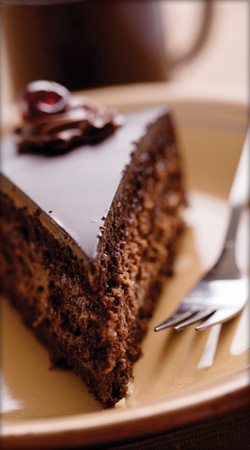 Thinking outside of the box is a defining characteristic of PreGel. We are constantly seeking and developing new niches for our products, acknowledging that the ingredients are common to many diverse culinary applications. With this in mind, we invite you to think beyond the gelato dish, and expand your horizons with our innovative recipes!

Preheat oven to 350°F. In a small saucepan, bring the water to a simmer, then add the chopped chocolate over low heat, whisking until smooth. Allow to cool to room temperature.

In a medium bowl, whisk together the flour, Cacao Togo, baking soda and salt. In the bowl of an electric mixer, beat together the butter and sugar until well incorporated. Add the egg yolks one at a time, beating well after each addition. Add the chocolate mixture and the vanilla. Add the dry ingredients alternately with the buttermilk, starting and ending with the dry ingredients.

In a separate, clean and dry bowl, use the whisk attachment to beat the egg whites to medium-stiff (not dry) peaks. Gently fold the whites into the batter.
Pour the prepared batter into three round (8″) cake pans, coated with nonstick cooking spray. Bake the cake layers just until a tester comes out clean – about 40–45 minutes. Cool layers in pans, then remove and proceed as desired with assembly and decoration.

Cut the butter into small pieces and allow to fully soften at room temperature.
In a medium saucepan, combine the sugar and water, and bring to a boil. The solution may be stirred to encourage dissolving the sugar up to the point of boiling; however, the syrup should not be stirred thereafter. Continue to boil the syrup until a thermometer reads 248°F.

In the meantime, while the syrup is boiling, use the whisk attachment of
an electric mixer to beat the egg whites with a pinch of salt. Once initially foamy, add the cream of tartar and continue beating the whites until stiff (not dry) peaks form. Reduce the mixer speed to low-medium, and pour the syrup into the whites in a steady stream. Avoid pouring the sugar onto the bowl or beating attachment(s).
Increase to medium speed and beat the mixture until cool –
about 10 minutes.

Add the butter, one piece at a time, and beat until the mixture is fully incorporated and smooth. The buttercream will thicken and develop a glossy appearance.
In a microwave safe bowl, melt the Prontociocc just until fluid and smooth. Allow to cool slightly to room temperature. With the mixer on low speed, pour the Prontociocc into the buttercream and mix until fully incorporated. Add more or less Prontociocc, according to desired intensity of chocolate flavor. (Use buttercream immediately or keep refrigerated for up to two days. Bring to room temperature and beat again before using.)

In a saucepan over medium heat, simmer the sugar and water until the sugar is fully dissolved and the syrup thickens slightly. Reduce heat and whisk in the Raspberry Fortefutto,® until fully combined. Remove from heat, cool to room temperature, and use as desired. (May be refrigerated for later use.)

For decoration and more intense chocolate flavor, use a fine mesh sifter to dust the top of the cake with PreGel Cacao Togo.