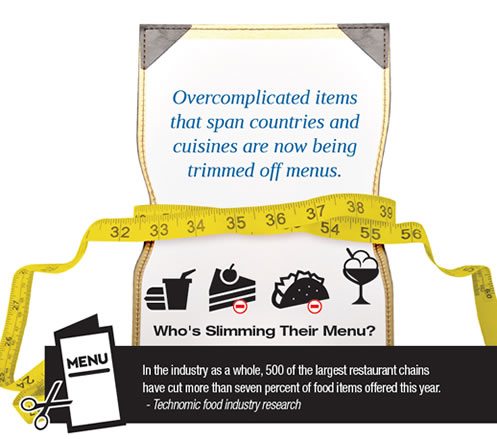 For years, the more options a restaurant had the better. Many chains figured if they offered more on their menus then there was less of a chance that diners would want to go elsewhere. Fortunately, Americans are growing tired of clunky and confusing menus. The over-complicated items that span countries and cuisines are now being trimmed off menus to cater to the change in the country’s food culture. In a sense, Americans are refining their taste buds.

Although it might feel that this change has taken place very suddenly, the average menu size in the U.S. has been decreasing for the last eight years, according to Datassential Menu Trends, a leading market research firm for the food industry. Many companies are launching what they call a “fewer, more impactful” launch strategy that essentially commits to bringing more gourmet-executed menu items and decreasing the number of options available. Even the world’s largest fast food chain, McDonald’s, has been caught up in the movement and openly admitted that its menu has simply grown too big. In the industry as a whole, 500 of the largest restaurant chains have cut more than seven percent of food items offered this year, per estimates by food industry research firm Technomic.

The push not only stems from the emergence of a growing millennial population, but slimming down menus is also a simple, straightforward way for restaurants to cut many of their costs. In the world of assessing food costs, long menus can lead to big issues among other concerns such as storage. The longer the menu, the less standardization of food. The amount of waste is increased and profit margins are decreased because restaurants have to charge more and thus diners tend to spend less. But now, there is an increasing demand for quality over quantity.

The current food culture now suggests that operators should create more focused menus. Today’s consumers are much more knowledgeable about food. They are ready and willing to search out the best new restaurants that present very specific offerings, and lose sight

when it comes to places that offer too many options. Comparatively sparse menu options are the restaurant industry’s testament that the movement has staying power. The rise in shorter menus, food trucks, chef’s menus and single-item restaurants indicate that the current consumer is in support of simplicity and focus.

Barry Schwartz, author of “The Paradox of Choice: Why More is Less,” states, “The research definitely indicates that when people have too many options, they buy less.” That’s a huge worry to companies like McDonald’s, IHOP and The Cheesecake Factory, all of which seemingly pride themselves on choice. According to USA Today, McDonald’s CEO Don Thompson recently told analysts that he wants to simplify the menu because it has grown confusing for some consumers. At the same time, he said, McDonald’s wants to offer more customization of core products such as burgers. In comparison, Virginia-based fast casual restaurant chain Five Guys Burgers prides themselves on simplicity, and it works. In a 2012 Chicago Tribune article, Market Force Information, Inc. polled 7,600 fast-food consumers, and Five Guys ranked No.1 in food quality and taste, service, cleanliness and atmosphere while Burger King, Hardee’s, McDonald’s and Jack in the Box rounded out the bottom four.

According to a recent survey by financial services firm Janney Capital Markets, a McDonald’s franchisee wrote “Our menu is a disaster for both employees and the customer. It has killed our speed of service.” What we see here nationwide are restaurant chains that were originally built on simplicity and efficiency who are now constricting themselves to the point where they can’t breathe. It’s a simple rule in the restaurant business: if you don’t have great food, then what do you have? That seems to be the new motto for many of America’s fast food giants. Companies like Chipotle who offer only 18 single ingredients that can be made into 60,000 different option shows that you don’t have to have much to accomplish a lot.

The kind of food we buy, where we get it and how it’s prepared are part of America’s identity now. It’s a far cry from where we were 20 or even 10 years ago. With today’s overload of menu innovation, it’s clear that consumers’ voices have been heard. Endless choices have ended and less is in fact, more. Consumers are aware of what they eat and how they want to eat it. Self-expression is now more important than a multiplicity of ingredients. The list goes on and on, but in the end it comes down to customization. We don’t want to be fed like robots; we want clearly defined choices with enough options to make us feel unique but not overwhelmed.