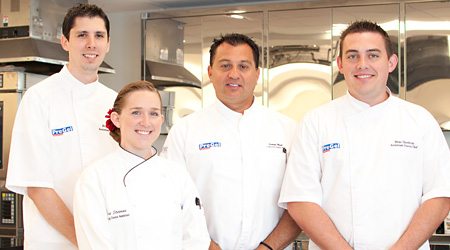 PreGel AMERICA’s Professional Training Center (TC) has been instructing dessert-preneurs and professionals since 2005. It is certified by the American Culinary Federation and recently brought in some of the world’s best pastry chefs as instructors. Accomplishing that much in its six young years is quite a feat, and it continues to set hefty goals to become one of the most renowned and recognized schools in the world of desserts. It isn’t an easy task, but under the direction of seasoned Pastry Chef Frederic Monti and his team, there’s no limit to how far the Professional Training Center will evolve.

Credited to its success over the last few years is the staff that has helped shape it. In its earliest stages, classes were instructed by PreGel AMERICA’s own CEO Marco Casol. Currently, the Fundamentals of Gelato & Sorbetto Class is taught by Moroccan gelato enthusiast Kal Sohkn, also the company’s North South Sales Representative. Sohkn has been a player in the world of gelato for over 15 years, worked in famous gelato shops in Italy and France, and taught hundreds of students at the facility over last few years. As the school has grown, it has incorporated not only gelato masters but tried and true pastry chefs too.

The Trendy Pastry for Beginners, Redefining Soft Serve: The Basics of Tenero and Frozen Desserts Basics classes are taught by Assistant Pastry Chefs Ben Shelton and Russ Thayer. Shelton has been with PreGel since 2008 when he started his co-op program as a student at Johnson & Wales and joined the team officially shortly after. Shelton has not only proven his great skill and patience as an instructor but is also the center’s talent for the company’s online demonstration videos. Thayer is a graduate of Central Piedmont Community College’s culinary technology, and baking and pastry arts programs, and joined PreGel in 2011. Thayer splits his time between instructing classes, recipe development for the marketing team and demoing at trade shows.

The classes and many other activities in the TC could not be carried out without Armando Rivera. Rivera is the currently serving as the group’s Training Center Steward and is critical to the staff assisting on numerous duties around the kitchen.

While Monti is the brains and inspiration currently behind the TC, the heart would have to be Alicia Stevens. Also a graduate of Johnson & Wales, Stevens started with PreGel in 2009. Stevens coordinates all activities within the Professional Training Center and is the voice on the other end of the line that many of the students and sponsors hear first. She keeps the facility running in tip-top shape and serves as a perfect executor of Chef Frederic Monti’s visions.

If you don’t know who Chef Frederic Monti is, it is about time you did. From the pages of So Good magazine to the Food Network and his many high- profile positions at the Greenbrier and Ritz Carlton properties, Monti is a force in the industry. His multifaceted talents are currently channeled on further developing the PreGel Professional Training Center. Since joining PreGel in 2009, he has helped transform the facility into an accredited pastry mecca and brought in top chefs such as Laurent Branlard, Michael Laskonis and Stephane Glacier for the 5-Star Pastry Series. Monti’s foresights tend to be spot on, and when he’s not directing new programs and classes, he is also the mastermind behind R&D projects and private demos that have landed new top-level accounts or expanded product lines within existing accounts.

A group as dynamic as this is hard to find, and yet the TC staff is there for every PreGel customer, question and need, whether it’s perfecting recipes, bouncing off ideas or sharing their wide range of knowledge. The Professional Training Center’s classes promise that students will learn and gain an abundance of knowledge, but it’s the team, the players in the equation, that truly make it an experience. The Professional Training Center has only begun to make waves in this industry, so stay tuned because with the people behind it, it’s only going to continue to grow and there’s no doubt you will want to be a part of it.