If you haven’t yet met Jack Duke, PreGel AMERICA’s national sales manager, rest assured he will make it to your businesses sooner or later for a face-to-face, and when he does, it’s hard to miss this 6’3″, Texan and Italian (more on that later), his passion for the job and of course gelato.

In fact, as he gives this interview he is headed to Fairbanks, Alaska, for yet another sales trip to further grasp the market and get to know PreGel’s many clients across the U.S. Duke spends 5-7 days a week on the road with his regional sales representatives visiting clients, distributors and prospects, upgrading his road warrior status to platinum. 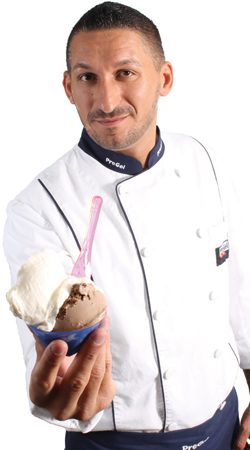 Prior to his role as national sales manager, Duke was the central regional manager covering his home state of Texas up to the Dakotas. Over the last six months he has plunged himself full force into the new position, but shares, “It has been very challenging for me to ‘leave’ my customers in the South Central, after so many years of great relationships: I still like to hear from them and message with them.”

Celebrating his five years with PreGel AMERICA (though Duke did spend some time with PreGel Italy prior to joining its subsidiary), the promotion to national sales manager is a fitting one for a man who shares passion, respect and professionalism as the top three attributes that have made him successful in his career. “The most rewarding part of my job has been the ability to build new relationships across the nation, without giving up making gelato and yogurt (hands-on production is still my passion),” said Duke.

Duke’s outlook on success can be attributed to his past as well. Formerly with the Italian army (Carabiniere) and 13 years in sales prior to PreGel, Duke’s understanding of discipline, organization and the volatile nature of sales have all primed him to become the professional he is today. However, it’s also Duke’s sense of humor and ability to look back on “unique” situations and laugh that also add to his enthusiasm for the job.

“In sales you meet so many different people and every day is an adventure,” said Duke. “Two favorite tales from the road include just a few months ago being stuck in an elevator for about an hour and a half while my coworkers were at dinner and thought I was playing a joke; and meeting a potential client at a bowling alley who just so happened to be a drag queen. These unexpected things make my job so interesting.”

What doesn’t interest Duke, however, is airport/airplane food. Duke tries to pride himself on maintaining a fit and healthy lifestyle, and life on the road isn’t always conducive to that. It’s also not easy to keep up with his family in Italy with the constant change in time zones. And I know what you’re thinking, Jack Duke – Italian? No way! But, he was born and raised an Italian citizen who also happens to have an American dad and grandfather, the latter who came to Italy as a U.S. soldier during WWII. Having resided in Texas for many years, Duke also considers himself to be a Texan, and probably knows more facts about the state than a true native.

As both an Italian and Texan, Duke is the epitome of passion in everything he does, making him yet another great fit for a company who shares the same vision.