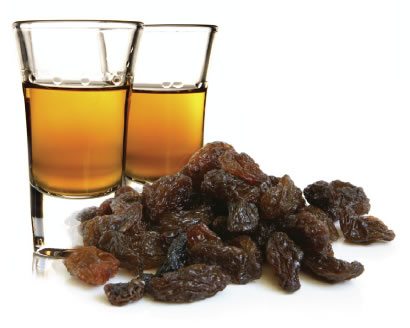 Raisins are a popular ingredient in traditional desserts, and a cherished staple in one of Europe’s most authentic flavors, Málaga, known in the U.S. as “Rum Raisin.” The Sicilians were the first ones to create Málaga gelato, which was originally made with wine instead of rum. The raisins were soaked overnight and mixed into vanilla gelato, providing a sweet burst of alcohol in every bite. The trend caught on, and today people around the world enjoy this flavor in various other desserts, such as custard, pudding, pies, cookies and cake.

This unique flavor was first made with Málaga raisins, which have a high concentration of natural sugar. They are a prized raisin in Europe, and are the result of sun-drying the Muscat of the Alexandria grape – a variety of the Muskat family which is one of the oldest in the world. Thought to have originated in Egypt, the Muscat grape was propagated by the Greeks and the Romans to create a deliciously sweet wine.

While there are many theories as to its name, the musky aroma of a ripe Muscat grape is known to attract bees and other insects. Interestingly, “mosca” is the Italian word for “fly.” The varieties of this grape family were used for highly aromatic wines, but the Muscat of the Alexandria grape has long been used for creating some of the best raisins in the world. Due to their naturally sweet taste, Málaga raisins are different than others, as they do not require additives such as dextrose, sulfites or sucrose to improve appearance or taste.

Málaga raisins were also cultivated and perfected by natives of La Axarquía, a historic region in Spain’s southern city of Málaga. The raisins are so popular that tourists today are encouraged to take the famous Raisin Route Tour called the “Ruta de la Pasa,” which takes them through whitewashed Moorish villages. However, it was the Italians who first soaked the raisins in Marsala wine to make creamy Málaga gelato. Marsala is a wine from Marsala, Sicily, and can be easily interchanged with rum as they both share a similarly sweet and light flavor profile. Hence, “Rum Raisin” was born.

Rum is believed to have originated in India or China, but the first distillation and mass production of rum took place in the Caribbean Islands and Jamaica. It is made with molasses, a thick brown syrup obtained from the refining of sugarcane into sugar. As CBS news writer Seth Doan explains, “Sugarcane was first introduced to the Caribbean in 1493 by Christopher Columbus. But it wasn’t until the decadent era of Louis XIV that Europe developed a real sweet tooth.” Per Doan, this fueled the production of sugar in the islands, resulting in massive amounts of molasses which was distilled into rum.

The sweet, yet light, flavor of rum makes it an excellent choice for soaking raisins. In the 1980s Häagen-Dazs® introduced its rum raisin ice cream to the U.S. market. The frozen dessert boasts a sweet cream flavor and continues to be one of the brand’s classic favorites. Other companies also carry rum raisin ice cream, but it is typically found in more authentic dessert parlors.
As a gelato or ice cream, rum raisin is well paired with poached pear, apple pie, and tarts. In pastries, it is typically reserved for more traditional recipes, and commonly enjoyed during the holidays as a nostalgic flavor choice. Rum raisin bread pudding is one example, baked with a touch of cinnamon and vanilla extract. Mix in bananas and some eggnog for a truly seasonal dessert.
Latin cuisine is no stranger to Málaga, with items such as rum raisin flan. The dessert is served after dinner during Christmas gatherings among family and friends. Empanadas are also another way to impress guests, often stuffed and baked with caramelized fruit and rum-soaked raisins. However, raisins are also added to ground beef empanadas to create a main dish with a sweet component. Rum raisin pudding has also been revamped and cooked with rice for a unique Latin twist to the classic “Arroz con Leche.” The dish is prepared in a few easy steps with whole milk or sweetened condensed milk.

One of the most traditional applications of rum raisin is in Bundt or fruit cakes. They are perfect for office potlucks and make an excellent holiday gift. Adding cranberries gives this dessert an extra pop of seasonal color. Serve warm with a scoop of gelato and coffee for a rich afternoon treat. To make a truly authentic Italian dessert, rum raisin tiramisù is an ideal choice.

No matter what kind of dessert it’s in, rum raisin is a time-honored flavor that is here to stay. Not only is its history deeply rooted in the Italian tradition of quality desserts, but it serves as a unique flavor to diversify any menu. PreGel offers its Málaga (Rum Raisin) Traditional Paste, which can be used to make gelato, ice cream, soft serve and a wide range of pastry items. Visit www.pregelrecipes.com to find recipes with the savory taste of rum raisin.