Try as it might, the thin beige shell of a ripe pistachio nut is utterly plain compared to the goodness it surrounds. In fact, the pistachio itself at first glance could be considered modest; the nut’s crunch is unaggressive, the flavor is subtle and the texture is creamy; even its pale green color is a mild representation of nature. The only thing boisterous about a pistachio nut is the culinary versatility it provides and the wealth of healthful benefits the treat embodies, which actually makes it not so modest after all.

Whether a person is vegan, vegetarian, or a carnivore, the pistachio nut is a diet-friendly food that was once considered a treasured delicacy among royals, and has been revered as a symbol of wellness and robust health since ancient times. Contrary to popular belief, the pistachio nut is not of the legume family, but is botanically a drupe fruit—a fruit with a large central seed—from a species of trees belonging to the anacardiaceae family of the genus Pistacia vera. 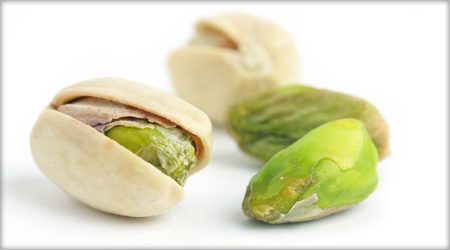 Like grapes, pistachios are borne in heavy clusters, otherwise known as bunches. And though pistachios are believed to be of western Asia origin, the fruit, which flourishes in hot, dry climates with cool winters, is currently being harvested in orchards in North America, Iran, Syria,Turkey and China. Pistachio nuts are also grown in the eastern Sicily region of Italy, particularly around the Mount Etna volcano and Bronte areas, producing pistachio nuts that are slightly longer and thinner than those grown in the Middle East. They also possess a stronger, sharper taste, partly due to the volcanic soil they are grown in.

Though there are several varieties of pistachios, the most popular pistachio tree comes from the Kerman, the leading female commercial variety in the United States. Kerman pistachios account for nearly all U.S. pistachio production because of their large size, kernel texture and widely split shells. To date, California is North America’s leading producer of pistachio nuts, providing 98 percent of U.S. pistachios, followed by Arizona, Nevada, New Mexico,Texas and Utah. Furthermore, the United States is generally the second leading producer and exporter of pistachios behind Iran, providing 24 percent of the world total.

Not only are they delicious and bountiful, but pistachio nuts are challenging fruits as well, in the sense that they undermine several stereotypes surrounding them. For example, many people believe pistachio nuts to be a fattening fare; however, most of the 13g of fat per serving is of the unsaturated variety according to Livestrong.com. Unsaturated fats are known to help reduce cholesterol levels, as noted by the American Heart Association, unlike saturated fats often found in animal products and trans fats. The inch-long drupe fruit is also a rich source of energy and minerals like copper and magnesium.

Protein-rich pistachio nuts are a great resource for antioxidants, carotenoids that protect against certain eye diseases, as well as fiber. Moreover, pistachios lower cholesterol levels and aid in the protection of cardiovascular health. It is reported that a handful of pistachios a day provides enough recommended levels of each nutritional benefit mentioned.The U.S. Dietary Guidelines for Americans recommends this nutrient dense food to be regularly included in the diet.

The pistachio nut is arguably a pricey snack, but the monetary value of pistachios depends on the color of the kernel and whether the shell has to be opened by mechanical means. Normally shells that are not opened are worth less than those that have opened, and the greener the kernel of a pistachio nut, the higher the value.

Popularly used as a garnishment for salads, a coating for fried fish or poultry, or flavoring for ice cream and premium gelato, pistachios have also been employed as an ingredient for soups, pastes and pastries including muffins, cakes, pies, tarts and entremets. Pistachios add flavor to savory dishes like meatloaf and rice, and have also proven to be a delicious alternative in recipes that call for pine nuts. Pistachios easily add taste and a more robust texture to any dish including garnishments like pesto sauce.

Nevertheless, the delicate flavor of the pistachio nut proves to be a wonderful canvas for the expressive chef or simply as an enjoyable, nutritious snack for anyone. 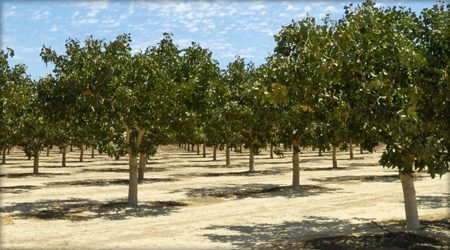