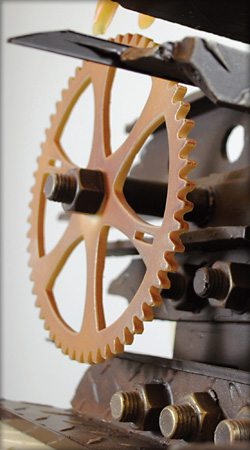 Sublime curves, brilliant, eye-popping colors, artisan-crafted elements that defy the logics of physics – all of these and more are among the elements of well-crafted chocolate sculptures. Chocolate architecture is as popular as ever today, and it is finding its way into everything from simple cake adornments to complex structures presented at the most trendy and prestigious events.

Elaborate chocolate sculptures or showpieces are often found at special events and competitions, but chocolate art can also be used to add an air of luxury to any dessert. Today we think of chocolate as a solid, edible food that has the ability to be molded and sculpted in various ways, but historically speaking, it was not until the Industrial Revolution of the 1800s that this was made possible. The Revolution ushered in a new era for chocolate with the invention of machines such as the cocoa press and the conching machine, which processed the oils and solids into a workable form. This industrial feat helped chocolate become more accessible and usable, leading to many new developments in chocolate including chocolate bars, molded chocolates and the idea of chocolate as an art form.

Chocolatiers and pastry chefs around the world continue to be inspired by this unique and delicate substance every day. Even more inspiring is what they are able to create from chocolate. In 2006, Chef Alain Roby created a 22-foot sculpture of the Empire State Building. The honors for the largest chocolate sculpture, however, go to Guinness World Record holder Mirco Della Vecchia for creating a 5.37-ton sculpture of the Dome of Milan made entirely out of white chocolate, topping his previous world record, in April of this year. Today, there are international competitions such as the Grand Chocolate Masters, the World Pastry Team Championship and this year’s first annual StarChefs.com International Pastry Competition that judges the best of the best in sculpture design and execution. Chocolate architecture is catching on fast, but it’s not as easy as it looks. Taking a closer look at the technical aspects of working with chocolate will provide appreciation for this tedious art form, while also offering initial guidance for those looking to incorporate chocolate designs or decorations into their product offerings.

When it comes to the architecture of chocolate, there are several methods used for showpieces and chocolate decorations. The simplest is poured shapes. Tempered couveture chocolate is poured into a formed mold, often lined with acetate – the mold can be anything that the couveture will release from or can be cut out of, including plastic, metal and resin. Shapes can also be created by pouring tempered couveture into a frame and then, before the chocolate has completely set, the desired shape is cut free-form with a knife or a shaped cutter.

Perhaps one of the most common shapes for poured chocolate is the hemisphere. In this case, layers of chocolate are poured into a mold, making sure that each layer is not completely set between pours to prevent the layers from separating. The mold is then left to set, and once the chocolate has contracted, the halves easily remove from the mold. The pieces are then melded together by heating the rims of each and gluing together.

Molded hemispheres are the main building block for chocolate truffles and make the perfect accommodations for fillings such as ganache. A single, larger hemisphere often acts as an artful way to display mousses, creams, fresh fruits, liqueurs and almost anything that requires a vessel.

These techniques are employed with precision by culinary artists to construct chocolate masterpieces,but are also useful on a smaller scale for a whimsical touch to any dessert. An example of this are chocolate placards, which are produced by spreading liquid chocolate onto prepared acetate sheets, which are often predecorated with colorful cocoa butter designs. Once the chocolate sets, the acetate sheet is removed and the chocolate can be cut into desired shapes. Placards, when formed on a cylinder, can be cut into swirling, curvaceous decorations that lend a sense of motion to the tops of pastries or pans of gelato. Acetate cocoa butter transfer sheets are widely available in countless designs and colors, and are also able to be customized with particular words, images or company logos.

A well-crafted chocolate decoration or accent piece is a sure way to instantly increase the perceived value of a dessert. Like a beautifully tied satin ribbon atop an elegantly wrapped gift, decorating your pastries or pans of gelato with chocolate lets your customers see the talent and craftsmanship behind your products.