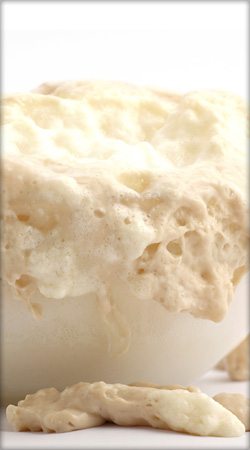 NOT EVERY EXPERIMENT IS A SUCCESS… OUR CUSTOMERS SHARE SOME OF THEIR BLOOPERS.

A little experimentation is always needed to develop new recipes. As with any project, not every experiment is a success. We’ve seen and heard a lot over the years from different customers about their successful new flavors and creations, and they’ve even shared some of their very own bloopers. Some of these resulted in laughs, others in tears, but these chefs weren’t afraid to try something new and share their stories to inspire future creativity.

1. After developing a new recipe, a gelato maker proudly put the mix into the batch freezer to see this creation come to life. Assuming that the front grate of the machine was completely closed, he flipped the switch and with a whoosh, the gelato mix poured right out of the front grate and all over the shop floor!

2. A pastry chef was a little sleepy one morning. After several trays of blueberry muffins, she noticed they just didn’t look the same, and to her dismay, they definitely didn’t taste the same. She quickly realized she used salt instead of sugar and that was the last time she grabbed an ingredient without double-checking its label!

3. Thinking that blueberry pancakes sounded like the perfect gelato flavor, a gelato maker poured a box of pancake mix right along with the other solids and then blended with milk. The finished product tasted literally “right from the box” – he then realized he should have made the pancakes first and then added them in.

4. A pastry chef was training a part-time employee to help with the holiday season. As she quickly demonstrated his process for tarts, she hoped the new chef was keeping up. When it came time for the employee to replicate the process for the next day’s tarts, she failed to check the tare weight of the scale and instead only added a portion of the product. The tarts failed her but the chef gave him a second chance, knowing that’s a mistake you only make once!

5. To get ready for an early morning event, a gelato maker raced around filling his display case. As he wheeled his display case outside, he forgot one important factor – it was an exceptionally hot sunny summer day and the case was no match for the sweltering heat. As he started serving, he realized the gelato was completely melted.

6. In anticipation for a children’s birthday party, a gelato maker thought bubble-gum-flavored gelato would be the hit of the party. Upon serving it and seeing the puzzled looks on their little faces, he quickly tried it himself only to have his bubble burst when he realized he had forgotten the sugar.

7. Feeling festive for an adult holiday party, a gelato maker wanted to spice up the party with a cup of peach champagne gelato for all served in champagne flutes. Adding a little more than the recommended amount to keep things “festive,” he ended up with a gelato that wouldn’t process. He forgot a high alcohol content will not freeze.

8. A gelato maker was working non-stop before her shop opened. Unfortunately, she grabbed a pan from the counter which she thought had been previously placed in the freezer and extracted the gelato. As soon as the gelato hit the bottom and sides of the pan, it instantly started melting, and the lofty waves she was working to create came out looking more like a low tide.

9. A main street bakery was busy baking bread one morning when its equipment malfunctioned. Not being able to fix it, the dough being made was unusable and thrown out in the parking lot dumpster. Later that day, several staff members headed home and were surprised to see the dumpster and part of the parking lot covered with a white blanket. Upon closer inspection, they realized it was dough! The yeast had risen in the heat and resulted in a lot of baked bread… and a lot of laughs.

10. A shop owner had decided to participate in a charity event. To be ready in the morning, he made all the gelato the night before and placed it in his blast freezer so that it would be frozen at lower temperature and hold up during the 25-minute transport time to the event. What he didn’t plan for was the freezer door not being shut all the way and the melted mess he found the next morning. Luckily, he arrived early enough to be able to reproduce the pans with plenty of time to spare. You have to applaud his efforts all for charity.