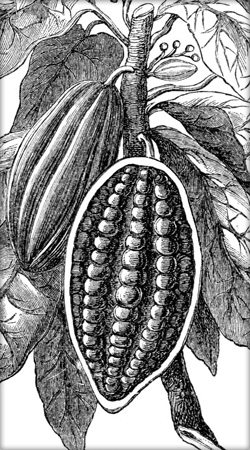 Known as the “food of the gods” with a noted history of being fit only for royal consumption, the cacao bean is perhaps the most revered and treasured bean of all. The cacao bean’s early history includes serving as a common currency as well as a restorative, mood-enhancing cure-all by the ancient Mesoamerican Mayan civilization, which is the first recorded civilization to herald the bean. Over thousands of years, the cacao bean’s rich popularity has continued to soar, but the facts about its origins are little known, including its often mispronounced name.

With its rightful label having been linguistically altered over time, the word cacao (pronounced ka-kaw) became Anglicized and phonetically transformed to sound like cocoa (pronounced koh-koh) when spoken. However, cacao refers only to the majestic tree and its brownish-yellow to purple, pod-like fruits. The fruits carry 20-40 seeds or beans which can be found in the pod’s whitish-pink, sweet yet bitter pulp. Cocoa refers to the by-products of the cacao bean, namely cocoa powder and cocoa butter.

Officially identified by its botanical name, Theobroma Cacao, there are three main types of the cacao tree that grow almost exclusively from 20 degrees north to 20 degrees south of the equator – the geographical region known as the “tropical belt” or “cacao belt.” These tropical trees that normally grow in the shade of other exotic foliage are the Criollo tree, the Forastero tree and the Trinitario tree.

The Criollo tree yields very high-quality, full and plump cacao beans that are light purple to white in color. The beans from this tree produce a chocolate that is not overly rich and has a unique blend of fruits and spices, classifying its bean type as a “flavor bean.” The Forastero tree is disease-resistant and generates 80 percent of the world’s cacao. It produces flat, dark purple cacao beans known as “bulk beans” because they yield a rich chocolate flavor. Trinitario is a crossbreed between the aforementioned species, as it is disease-resistant like Forastero and creates flavor beans similar to the Criollo.

Though cocoa powder and cocoa butter are derivatives of the cacao bean, the bean itself is bitterly unfriendly to the palate by today’s standards despite the enjoyable melon/apricot sweetness and mild, floral lemon tartness of its refreshing pod pulp. However, the various flavors that the cacao bean can produce are as plentiful as the uses of the powerful seed. The region in which it grows, the variety of the tree, the nutrient-enriched and lava-laden tropical soil, the temperature, and the amount of sunshine and rainfall play a part in the unique taste of each bulk or flavor bean.

Contrary to the strong aromas that chocolate gives off, the cacao bean doesn’t initially have a familiar cocoa scent. That aroma doesn’t tease the senses until the beans have first been fermented, which is when the seeds are transferred to wooden crates or baskets from the fruit pod and layered with banana leaves for 2-7 days or more, and then spread by hand and dried by natural sun or electric driers. The drying process takes up to two weeks, and during this time, the warm, comforting scent of cocoa begins to emerge. This process also changes the natural color of the cacao bean to dark brown.

The cacao bean is the source of many commodities we have come to value including skin-nourishing cocoa butter and rich, chocolaty cocoa powder. Thanks to the cacao bean and its estimated production of nearly 2,855,000 tons per year, the savory drink of hot chocolate, as well as white, milk and dark chocolate treats of all kind, continue to bring smiles to faces young and old. The cacao bean also offers a wealth of health benefits (Check out page 20 to measure your chocolate nutritional knowledge). From its colorful pods to its delectable flavor range, the cacao bean has easily proven itself to be a natural form of simple magnificence.