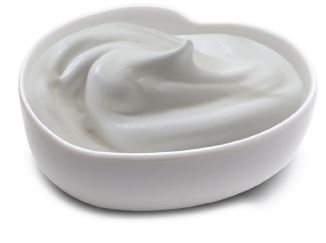 Native to Lombardy, Italy, mascarpone is an intensely rich triple cream cheese that is said to have been created around the 16th century. Made from blending curdling milk with citric acid or acetic acid, the result produces a soft, sweet, creamy, spreadable fare. Mascarpone’s soft texture ranges from smooth and creamy to buttery, and it has a white to pale cream color. To create the ideal mascarpone, it is reported that some dairies feed their cows diets high in flowers and herbs to ensure the cheese has a fresh flavor. Mascarpone’s variety in appearance and texture has been the object of confusion among consumers, as it’s often mistaken for regular cream cheese despite the differences between the two. Both are pale, spreadable cheeses, but cream cheese utilizes a combination of cream and milk. In addition to this visual mix-up, mascarpone has also been subject to name mispronunciation. An often overlooked cheese, mascarpone has a bright future as it was named one of the “HOT” flavors of 2014.

Mascarpone is the kind of cheese that can easily take the lead or successfully play secondary ingredient in any given dish. Its unassuming pale color does not dominate the visual aspect of a recipe where it is not the star ingredient, and the taste of the cow milk-based cheese is not overwhelming, allowing other flavors to radiate. Additionally, this vegetarian-friendly cheese does not contain rennet – the extracts of stomach lining from a baby calf, goat or sheep that is normally utilized for the production of some cheeses. For consumers who keep kosher and vegans who don’t consume any animal-based foods including dairy, there are vegetable and microbial-based alternatives to traditional rennet. Use of non-dairy milk such as rice or soy is also acceptable. Furthermore, whey – the remaining liquid that is left behind after cheese curds separate from milk or cream during the cheesemaking process – is removed from the mixture. In regard to taste integrity and culinary diversity, the high-fat cheese is gentle to handle, soft on the palate and malleable, and conducive to recipes that are either sweet or savory.

What Can I Make with Mascarpone Cheese?
Mascarpone cheese has loaned itself to enhancing countless flavorful dishes. But be sure to use it within a few days, as the shelf-life is not very long. Pasta entrees, soups, mashed potatoes, tarts, casseroles, spreads, vegetable bakes and savory grilled cheese sandwiches are just a select few examples of dishes that have benefitted from mascarpone’s flavoring possibilities. Of course, the creamy cheese can be enjoyed as a standalone treat or employed as a delectable accent for fresh fruit. Although the cheese is a secret ingredient to many successful recipes, mascarpone is most notable for its inclusion in the Italian tiramisù coffee dessert.

Ultimately, mascarpone is the perfect muse for a plethora of creative culinary ideas spawning from the adventurous chef. If utilizing one ingredient to make a vast multitude of culinary dishes is the goal, mascarpone cheese is one to consider. It may sound cheesy, but a versatile ingredient such as this would give any chef a reason to smile.