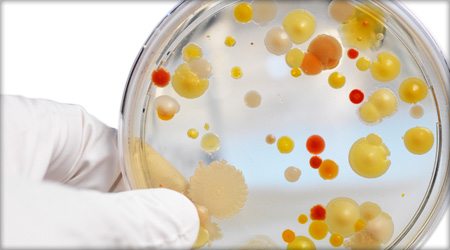 As we scan our local grocery stores and eateries, it seems that more and more product labels and marketing materials are boasting pro- and prebiotics. If you’re like most people, we’re left asking ourselves, “Since when did I order bacteria with my frozen yogurt?” Turns out you’re not alone, and a closer look at these “friendly” microorganisms is just what you need.

When we think of bacteria, we wouldn’t usually jump at the idea of eating billions of them, but it’s time to think again. The most widely accepted definition of probiotics was created by the FAO (Food and Agriculture Organization of the United Nations) in 2002. The definition classifies probiotics as “live microorganisms which when administered in adequate amounts confer a health benefit on the host.”1 Put simply, years of research on these “good” bacteria have suggested the health benefits of consuming probiotics as a part of a healthy and balanced diet.

To understand the importance of probiotics, it is necessary to recognize the role of bacteria in the function of the human body. Bacteria (single-cell microorganisms) colonize throughout the body and are essential for the immune system, infection prevention and proper intestinal function. For many reasons, however, naturally occurring bacteria may not sufficiently or optimally perform these crucial functions.2 Therefore, health experts have determined that probiotics are a highly beneficial way to ensure healthy body functioning. Studies have shown probiotics aid in digestive health, improve lactose intolerance, enhance immunity by regulating antibodies, weaken negative side effects of some antibiotics, improve vitamin and nutrient availability, decrease the risk of certain cancers and potentially prevent the development of allergies in children.3,4

Considering the benefits, it is no wonder that consumers are eager to incorporate probiotic-rich foods into their diets. Since food marketing can be occasionally confusing or misleading, it is important to know what to look for on a product label. The majority of products with added probiotics contain bacteria from the genera Lactobacillus or Bifidobacterium, with Enterococcus, Bacillus and Saccharomyces (a yeast) also being commonly marketed.5

However, within these broad genera, there are important subcategory classifications. Gregor Reid, director of the Canadian Research and Development Center for Probiotics, wittily highlights the significance of understanding these specific subcategories: “Lactobacillus is just the bacterium. To say a product contains Lactobacillus is like saying you’re bringing George Clooney to a party. It may be the actor, or it may be an 85-year-old guy from Atlanta who just happens to be named George Clooney. With probiotics, there are strain-to-strain differences.”6

In September of 2009, the settlement of a legal case against Dannon™, one of the largest sellers of probiotic yogurts, required the company to revise its Activia™ and DanActive™ health claims – among the changes adding scientific names of the specific probiotic strains utilized in their products. Other food companies will undoubtedly follow suit, thereby making it easier for consumers to verify expectations about a particular product. Those interested in the scientific studies that support probiotic health claims can visit www.PubMed.gov for the most current available information.7 To further ensure that consumers are receiving safe and beneficial products, regulation has been established for probiotics. In 2002, the FAO/WHO (World Health Organization) Working Group for the Evaluation of Probiotics in Food set specific rules including that the probiotics must be alive when administered; have undergone controlled evaluation; be scientifically defined with genus, species and strain level; and must be safe for their intended use.8 Furthermore, for foods marketed in the U.S., any qualified claims must conform to established nutrition and labeling laws.

Probiotic-fortified foods are increasingly popular, now including everything from yogurts and cheeses to dietary supplements, fruit beverages and energy bars. Dairy products remain the most common source of probiotics for a few important reasons. First, some of the bacteria that are used to ferment milk into various dairy products (yogurt, buttermilk, kefir, cheese, etc.) are the same as those used as probiotics. Next, these dairy foods serve as a protective vehicle for the probiotics – protecting them from stomach acid and digestive enzymes that may otherwise destroy the bacteria before they reach the intestine and are able to serve their function.9 Last, since probiotics are still relatively new and elusive to most consumers, the idea of bacteria in food seems more comfortable when present in foods that we already know to contain “live, active cultures” – an accepted, healthy image for various fermented dairy products.

Having a closer understanding of probiotics, it is easier to grasp the purpose and function of prebiotics – most simply thought of as food for the “good” bacteria in our bodies. Prebiotics are non-digestible substances (most often nutritionally classified as soluble fibers10) that when consumed confer a benefit on the host by stimulating the growth and/or activity of select indigenous bacteria.11 This stimulated growth of favorable bacteria also helps to inhibit the overgrowth of pathogenic (disease-causing) bacteria. The variety of health benefits from prebiotic consumption therefore are the same as those associated with probiotics – the former involving consuming the actual bacteria, and the latter serving to increase the natural presence of those bacteria in the body.

Prebiotics occur naturally in a range of foods including chicory root, onions, bananas and oats, and may also be isolated from plants for the purpose of fortification into other foods. In order for an ingredient to be classified as a prebiotic, it must be proven that it is not broken down by the stomach nor absorbed into the GI tract, and it must be shown to stimulate the growth of certain gastrointestinal bacteria.12

Pro- and prebiotics are beneficial to our health and will likely continue to grow in popularity as consumers look for foods marketed with these components. So the next time someone offers you a plate full of bacteria and bacteria-stimulating ingredients, you may want to dig right in.