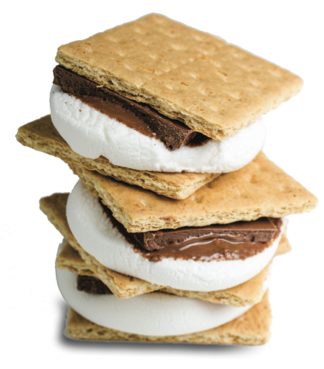 America’s love affair with the graham cracker is alive and thriving. With its sweet hint of sugar and cinnamon throughout the wafer, it is the quintessential everyday treat pairing perfectly with peanut butter, chocolate and marshmallows, and so much more.The story of the graham cracker is a unique one where the taste didn’t start off too well, but almost 200 years later it is a staple in today’s desserts. Although the original graham cracker recipe yielded a very bland result, the story behind the reason for its creation offers a lot more flavor.

The Bizarre History of the Graham Cracker

Diet fads have been around for centuries with the sole purpose of slimming one’s physique. According to the Woman’s Day online article “15 Most Bizarre Diets in History,” dieters have long been experimenting with regimen fads including Fletcherizing – chewing each morsel of food 32 times without swallowing the remains; The Cigarette Diet – smoking cigarettes in place of eating sweets; The Sleeping Beauty Diet – sleeping excessively to avoid eating; and The Breatharian Diet – living totally off of air. Despite society’s seeming obsession with their physical aesthetic, the Graham Diet invented by Reverend Sylvester Graham was meant to curb another kind of appetite – physical lust, particularly for oneself, which Graham believed caused insanity and blindness. From this came the invention of the graham cracker.

Reverend Graham, a former farmhand and teacher turned Presbyterian minister, believed that adhering to a vegetarian diet and abstaining from sugars, spices and foods made with overly processed flours and chemical additives would enforce purity of thought and deed, and curb the sexual appetite, according to several online resources. Graham’s devout dietary convictions on a strict, bland eating regime led to the creation of crackers made with non-bleached, all-natural, finely ground whole wheat flour, which is known today as “graham flour.” Reverend Graham’s ideology regarding bland food altering human nature didn’t quite evolve; however, the taste of his flavorless creation did.

The Flavor Evolution of the Graham Cracker

The bland cracker made famous by Reverend Graham and his loyal followers, otherwise known as “grahamites,” has emerged into a coveted dietary item Americans have come to love, and a canvas for innovation that chefs have grown to appreciate.

Initially lacking sweeteners such as sugar and honey, today’s graham cracker formulas incorporate ingredients such as molasses, brown sugar, kosher salt and ground cinnamon, depending on the baker. Coincidentally, history has revealed stories of “happy accidents” that spawned from Graham’s original graham cracker recipe, one being Corn Flakes® of the Kellogg’s cereal empire. Additionally, commercial graham crackers now contain bleached white flour and oils as a means to extend the shelf-life.The more modern recipe excludes endosperm of the wheat that was originally extracted and ground into the fine powder that Reverend Graham utilized for his custom recipe. 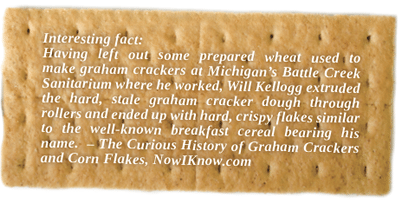 As required for all cracker recipes, small holes need to be poked throughout to allow air and steam to escape from the dough during the cooking process, preventing trapped air bubbles from expanding into bulges and exploding.The modern version of graham crackers familiar to our 21st century taste buds boasts a multitude of flavors such as honey, cinnamon, chocolate, chocolate chip, apple and strawberry-banana varieties.

These new selections are a far cry from the graham cracker of yesteryear and have allowed for the creative culinary imagination to evolve as well.

Common Uses and Recipes of the Graham Cracker

The graham cracker continues to be enjoyable as a stand-alone treat, but is also a very versatile complement to varieties of other desserts.

Though the motivating factor behind Reverend Graham’s cracker fizzled out, the cracker has proven to be a mainstay