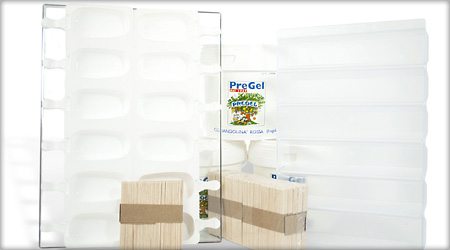 After launching five new Coriandolina® Frozen Pop Coatings as a part of the company’s 2011–2012 Novelties, PreGel AMERICA is taking frozen pop-making one step further. The company’s new frozen pop kit features all the tools needed to create gelato and frozen yogurt pops includ the mold, a frozen pop holder for display, a 500 pack of wooden sticks and an order of five mix-and-match cases of the Coriandolina® coatings.

While the kit is the best bet for business owners looking to branch into frozen pop-making, PreGel AMERICA will also be selling each of the components separately as a part of its ServIce™ line.

PreGel is already assisting its customers with creating frozen pops – the company’s Professional Training Center offers a Gelato Cakes, Frozen Pops & More Frozen Desserts Basics Class, which teaches the basics on crafting these highly sought-after treats. The company also has experimented with the Coriandolina® coatings for other applications such as a coating for pretzels, fruits and marshmallows, featured in PreGel’s August 2011 Training Center eNewsletter. In addition to these, PreGel plans on creating a step-by-step demo video later this year to also assist clients in the process.

PreGel’s Coriandolina® Frozen Pop Coatings feature the trendy flavors of coffee, white chocolate, strawberry, chocolate and lemon in a frozen pop coating form. The most notable feature of the product is that the coating doesn’t break or crack, which makes it easy to eat.