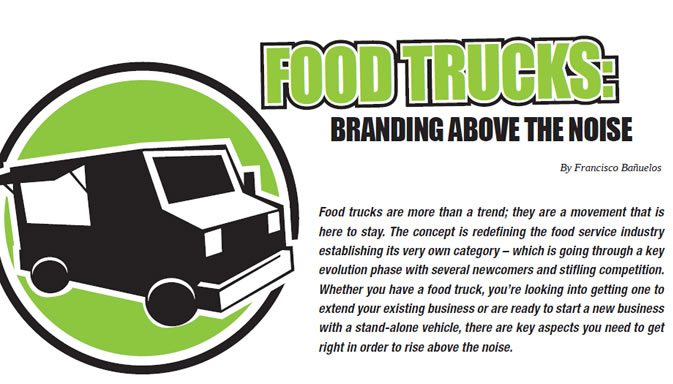 Let’s admit it, having a food truck has never been cooler. Musician Kelis recently released a new album in which her very own food truck was an integral part of the marketing effort. Yes, you read it right, Kelis, whom you might recall from the hit “Milkshake” has her very own food truck. And yes, she prepares the food herself. She launched a new album at this year’s South by Southwest (SXSW) festival in Austin, TX. To promote her album titled “Food”, Kelis cooked and served free gourmet meals that included jerk ribs, duck confit sliders and shredded beef sliders. It just so happens Kelis also went to cooking school in order to pursue another passion of hers, and she brought both her passions together performing both on stage and in the kitchen.

This is simply an example of how special and unique the food truck movement is – where rules are reinvented on a continuous basis to delight and engage consumers. Food trucks can easily extend the brand of any QSR, FSR, independent restaurant, cafe or frozen dessert shop. According to Ross Resnick, CEO of Roaming Hunger, anyone with a brand can benefit. “If you think about it, a food truck is a moving billboard; it has the ability to reach people.”

Resnick advises that branding, social media and sensory marketing are fundamental to finding food truck success. Operators should build a consumer experience through food and activating the five senses. Food trucks should go beyond simply providing a service and should be a vehicle to provide an experience. Catering private events is an area in particular in which establishments can take advantage of a food truck.

Regarding social media, Resnick stated that in the beginning “Twitter started to be used very transactional; food trucks were simply broadcasting their location.” He added that “inspiring a following is something different altogether, the deeper you go and interact in a more human way the more success you’ll find.” When asked where to start he pointed at the metrics. “Look at engagements metrics, see what performs well based on your business objectives and go from there.”

However, social media can be very time consuming, which can leave many entrepreneurs wondering whether to delegate or outsource this task. Resnick advised that when it comes to food trucks the passion that the operator conveys in the messaging is key as well as the ability to listen to feedback from consumers.

“The voice of the brand is so important. There’s no one size fits all for social media. For small businesses, nobody is going to have the insight into your business; therefore it is so important to convey the passion yourself.” He stated. “For some bigger organizations, they may look into outsourcing, however systems should be put in place to get the branding voice right and still listen to consumers.” Social media is key to food trucks because they are on the go. Consumers can continuously frequent an established location to get what they crave, so having interaction in a media space is important.

In addition to the passion conveyed in the messaging in these platforms, operators usually miss the opportunity to gain important insights into consumers’ opinions if they don’t pay attention to the conversation. “It’s easy to talk to people, it’s hard to listen,” states Resnick. “Larger entities should have a system in place, in which the consumer feedback can be easily trickled up so that you can keep listening.”

According to mobile-cuisine.com’s article “The Four Food Truck Differentiation Tactics that Work,” follow-up is key to customer retention. Overall, sending a personal email, tweet or Facebook mention goes a long way. However, it is easy for follow-ups to slip through the cracks when something goes wrong, and that’s the most vital time to make things right. The next time someone complains about a food product or the service they receive at your truck, reach out privately and personally to discuss the situation and work out a way you can make it up, such as a complimentary side dish on their next visit as the article suggests.

Branding is also an aspect that seems to make or break a good food truck. You should always start with your brand vision and goals, and move to execution from there. “So many people get a food truck first and try to figure out branding afterwards. Don’t start with the truck and try to involve the brand later,” advises Resnick. Starting with the vision is important with any enterprise, but unfortunately too many people jump too fast into getting a truck without envisioning the result that they want to convey in the end.

Furthermore, specialization seems to be the name of the game when it comes to successful food trucks. “My advice for specialty dessert food trucks would be to do one thing extremely well. If there is one item you can do awesome and no one else can, stick to it. Don’t try to do everything else. That’s the nature of the food truck,” adds Resnick. The size limits that the trucks impose have forced operators to specialize a little bit more. At the end of the day, consumers understand and embrace this.

Food trucks are no easy feat, whether it may be crafting a unique brand, finding the one product that will make you stand out, or listening to customer feedback on social media, you are guaranteed to be busy. But if Kelis can be successful, give a concert and hop offstage right afterwards to make her signature sauces, so can you.