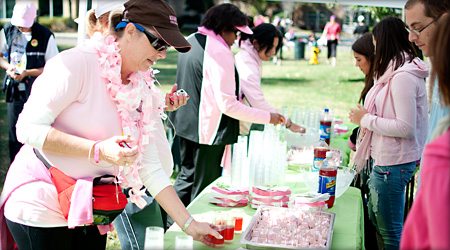 PreGel AMERICA is excited to announce the donation of over $7,000 to help fight the battle against breast cancer. “In It to Win It,” the dessert ingredient company focused its energies on a several campaigns in September and October to raise awareness and donate funds to local charity Carolina Breast Friends (CBF) and national charity the Avon Walk for Breast Cancer.

“PreGel AMERICA participates in different charitable activities throughout the year, but this is the first time we committed ourselves fully to a specific cause for a month,” said Jillian Hillard, marketing manager at PreGel AMERICA. “We had a lot of fun doing it, and it was really special to pledge ourselves to two different organizations that are helping to fight this awful disease.”

Utilizing a month-long customer promotion, PreGel AMERICA donated $5,000 to the Avon Walk. PreGel AMERICA offered its clients a 15% discount off its pink products, and for every order placed donated $5 to Avon, in addition to the company’s own contributions to make it an even $5,000. As a $5,000 sponsor, PreGel AMERICA was able to participate in the local Avon Walk in Charlotte, NC, on October 22, 2011, as a Rest Stop Sponsor. The Avon Walk for Breast Cancer is a national series of 39-mile weekend fundraising events launched in 2003 by the Avon Foundation. The company treated walkers to delicious strawberry Italian sodas and pink raspberry marshmallows as they walked the first day of the event. Walkers were thrilled for the sweet stop and loved the pink theme of the treats.

Focusing its fundraising skills more locally, PreGel AMERICA was also able to raise over $2,000 for local charity Carolina Breast Friends. Established in November 2003 by Kristy Adams-Ebel, CBF is a nonprofit 501(c)(3) organization committed to uniting and helping women with breast cancer in all stages of survival. To raise funds, the company opened its doors to the public for two days on Friday, September 9, and Saturday, September 10, to rally support from the community. On Friday during lunch time, guests were invited to choose from 25 different flavors of gelato with the opportunity to purchase scoops. On Saturday, the gelato sale continued and was combined with a yard sale. CBF received 100% of the proceeds, and based on the donation, PreGel AMERICA became a “Pink Friends” sponsor for 2011.

The company’s decision to embark on a month-long devotion to join the fight against breast cancer came after one of its employees was diagnosed with breast cancer, which inspired the office to become more involved. While the company is no stranger to charitable giving and has many initiatives in place throughout the year, this was the largest contribution to date. PreGel AMERICA hopes to continue this new tradition of dedicating itself to a worthy cause for a full month once a year and looks forward to what’s in store for 2012.