Newsflash! Accessorizing is not only for fashionistas. Everything needs a little glitz and glamour, even in the form of dessert. After all, we do eat with our eyes. A wise person once said every dessert deserves a garnish. A garnish is widely known as anything that adds visual appeal to a plate in the form of complementary colors, flavors, textures or temperatures. Like an accessory to an outfit, a garnish can transform a dessert into a culinary work of art.

Dessert garnishes are found in many different forms throughout the world, including sauces, fruit purees, fresh fruit, citrus, edible flowers, herbs, powders, ice cream, whipped cream, foams, chocolate, nuts and cookies. Every culture has its go-to embellishment, and we have honed in on popular ethnic garnishes found around the globe. Once you get a taste of these dessert enhancements, you’ll agree that it really is all in the accessories.

Americans Love the Cherry on Top

Everyone has uttered the well-known saying “with a cherry on top,” usually when asking for a favor like,“Can we get ice cream? Pretty please with a cherry on top!” The cherry on top being referred to is the well-known garnish that finishes off an ice cream sundae. Although American cuisine features other dessert toppings such as whipped cream, ice cream, chocolate shavings and strawberries, the cherry is truly the quintessential garnish that screams American dessert. These tiny, round balls of juicy sweetness are mostly grown in Washington, California, Oregon, Wisconsin and Michigan. While fresh cherries are wonderful, the form these garnishes take are that of a maraschino cherry – a preserved, sweet cherry. Maraschino cherries are found in many traditional American sweets, as well as cocktails such as Shirley Temples and Cosmopolitans.

Conventional American desserts beautified with a bold, red cherry sitting on top include: cheesecake, cupcakes, ice cream sundaes, brownies, cakes, along with any sweet treat that is finished with whipped cream. Not only does this fruit contribute an additional sweetness, but it enhances the dish with its vibrant color and ignites a sense of nostalgia in consumers.

Italy is known for its authentically decadent desserts ranging from gelato to cannolis to pannacotta. All of Italy’s traditional desserts vary in garnishes: cannolis are dusted with powdered sugar, pannacotta is topped with berries, but Italy’s most well-known dessert is finished off with cocoa powder. Tiramisú, the classic Italian dessert, is layered with espresso-soaked lady fingers, rum, mascarpone cheese, custard, and sprinkled with slightly bitter cocoa powder. Cocoa powder is the result of an extraction process which removes a large portion of cocoa butter from the cocoa bean. It becomes a versatile embellishment that is most often found as a drink garnish, mixed with milk to create a cocoa drink, or sifted on top of cakes as a finishing touch. 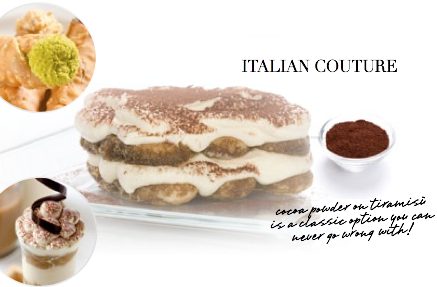 Unlike Italian cuisine, Mexican desserts have a widely used garnish adorning many of their plates: sugars. Not only are Mexican delicacies known for their authenticity, but almost every dessert is topped with powdered sugar, caramelized sugar or cinnamon sugar. Although all three forms of sugar are used to dress up a variety of sweets, one sweet really captured our attention as the soul of Mexican cuisine. Sitting at the heart of Mexico’s sweet treats is cinnamon, widely used as a flavor for desserts, but also used to embellish the finished product.

Cinnamon is a pungent spice native to Sri Lanka that is used in both sweet and savory foods, and pairs well with several fruits, chocolate, coffee, custards and much more. Often used as a flavor in Mexican dishes from entrees to drinks to desserts, cinnamon can also be mixed with granulated sugar to create cinnamon sugar, a sweet enhancement for dessert plates.

Fried-dough pastries known as churros are deliciously sweet, somewhat crunchy and allow for customization through dipping sauces. After churros are fried, they are rolled in cinnamon sugar as an eye-appealing and tasty addition to this fried dessert. Other Mexican- inspired desserts in the fried family that are dolled up with cinnamon sugar include fried ice cream, dessert empanadas, dessert chimichangas and buñuelos.

A fun fact about Japanese cuisine is that traditionally dessert is not served at the end of the meal, but rather as a standard accompaniment at tea time. These desserts are characterized as light, delicate, beautiful and fresh, and they carry the distinct style of Japanese cuisine that is minimalistic and clean. 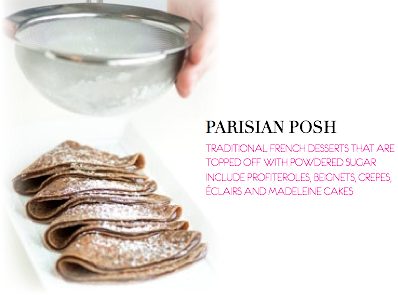 Customary French desserts are sweet, rich and creamy, ranging from layered cakes to crème brûlée to crepes. Their distinguishing characteristics include light and fluffy, layered, flaky – and in line with the French belief that meals should be savored, their desserts require much attention to detail. Furthermore, the French believe that every element of a dish is important all the way down to the garnish.

Although not fancy in nature, powdered sugar enriches many French pastries by adding elegance and depth to every dish it coats. Available in different degrees of fineness, powdered sugar is granulated sugar that has been crushed into a fine powder and is commonly used in icings and frostings, or as an enhancement to desserts. Traditional French desserts that are topped off with powdered sugar include profiteroles, beignets, crepes, éclairs and madeleine cakes. In plain terms, profiteroles are cream puffs filled with pastry cream, beignets are fried doughnuts, and madeleine cakes are traditional small sponge cakes with a distinctive shell-like shape – all found with a dusting of powdered sugar, making each delicacy more pleasing to the eye.

Greek cuisine is unique in that it is a delightful mix of dishes from simple grilled foods to elaborate casseroles that manage to appeal to all tastes. Equally delicious are Greek desserts, which are generally characterized by the dominant use of nuts and honey. Greeks love their sweets, which range from candies to marmalades to olive oil cookies to baklava, many of which are reserved for special occasions. Regardless of their use, Greek desserts tantalize the taste buds with their flakiness and traditional honey garnish, the common dessert topping found in this region of the world.

Loukoumathes are the Greek version of donut holes that are drizzled with honey and sprinkled with cinnamon. The honey drizzle gives these melt-in-your-mouth treats a sweetness and softens the deep-fried look of the dessert. One of the most popular desserts from Greece is Kataifi, often dubbed the shredded wheat dessert because of its resemblance to the cereal. The pastry has a nutty center and is garnished with either honey by itself, or with a sweet syrup created using honey as the distinctive flavor. Perhaps the most popular Greek dessert is baklava, which is a light and flaky pastry drenched in honey. This golden pastry soaks up the honey, giving it an added flair while adding visual appeal to the dessert.And let’s not forget the latest trend of Greek yogurt, often found topped with honey.

One of the many joys of garnishing is watching a dessert transform before your eyes as a result of a little imagination and access to ingredients. Research the culture behind the menu offerings at your business and decide what ethnic topping will cultivate the dessert into a multicultural masterpiece. Garnishes can be as simple or elaborate as you want, although it’s important to remember that your garnish should complement the main item, not overpower it. Make a big impact by accessorizing and watch your dessert become more enticing, tempting and eye-appealing with just a subtle finishing touch.