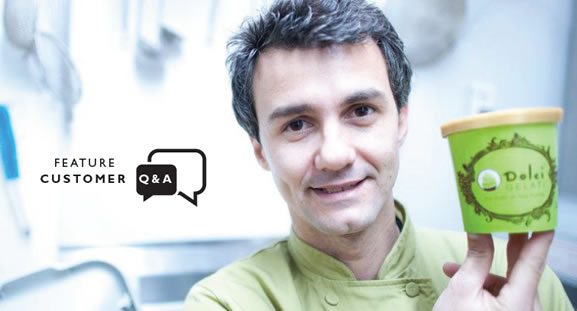 The food culture inside sports arenas has been visibly changing its course over the past few years, and it’s showing no signs of slowing down. The once- exclusive standards of hot dogs and chips are giving way to other varieties of food. Businesses have begun to realize that the public is willing to pay more to have better quality and a wider range of options when it comes to food. Especially in stadiums for long games, such as baseball or football (where the average game requires over three hours to complete), fans have longer breaks and more free time to browse and select what they want to taste. The public has become more demanding, not only about the quality of what they are eating, but also about the nutritional aspects of their food, opting for healthier alternatives when available. Arenas and food vendors around the country are seeing a need to innovate and take the opportunity to generate more income in this business. Moreover, the dessert market cannot be left out of this trend. New gelato, frozen yogurt stores and even carts have been popping up in stadiums all over the country as a healthier dessert option. To better understand, we asked a business with an inside perspective: Dolci Gelati. The authentic Italian gelato business currently has gelato carts spread across numerous sections of the Nationals Ballpark in Washington, D.C., in addition to its normal locations. Gianluigi Dellaccio, the passionate owner of Dolci Gelato, gelato maker and experienced pastry chef, tells us about his business model and experience with the customers at the ballpark.

Tatiane Banks (TB): What inspired the creation of Dolci Gelati?
Gianluigi Dellaccio (GD): The passion for gelato is in my family. I was actually a professional water polo player in Naples, Italy for a long time, and then in 1996 I decided to make a major career change and follow my family tradition and passion. I packed my bags and moved to Milan, Italy, to study pastry culinary arts and gelato at the “CAPAC” (polytechnic of commerce), which is a top gelato and pastry school in Italy. After I completed my studies, I moved to Bonn, Germany, to work at my cousin’s gelato shop, and there was where I could really develop my skills and love for gelato making. After spending some time there, I moved back to Naples and worked at a famous pastry shop. In 2000, I decided to move to the U.S., and here I worked for Galileo Restaurant in Washington, D.C., for six years as pastry chef until 2006, when I finally decided to start my own business and created my gelato factory, Dolci Gelati.

TB: How many locations does Dolci Gelati have? I understand you have a mix of shops, food truck, food carts, distribution and catering, is that right?
GD: In total we have the Dolci Gelati Cafe, located at the Takoma Park; one food truck which goes around the city and is always in a different location; the food carts at the Nationals Ballpark and we used to be at the National Zoo. We distribute gelato to various restaurants, specialty supermarkets such as Dean & Deluca and Whole Foods (in D.C., Maryland and Virginia), catering companies, and we also distribute in Pennsylvania, New Jersey and Delaware through US Food Services. We are planning to open another shop soon in downtown D.C., which will be even bigger and will have more options on the menu than the one at the Takoma Park

TB: What is the biggest difference you see between the customers’ behavior at the food trucks versus the food carts inside the Nationals Ballpark?
GD: They are very different publics. At the Ballpark, there are always massive numbers of people, usually families, and they look for the classic flavors. There are some regular clients, who attend numerous games so they know where we are and what to look for. The customers that come to the food truck visit us more often at lunchtime and they look for gourmet flavors – they want to see something unusual, which is a great opportunity for us to create. As a pastry chef I like to bring new ideas to the table, like one of our new flavors, the Rhubarb Pie Gelato.

TB: What other types of food would you like or expect to see sold at the stadiums soon?
GD: Healthier options and good quality food for sure. Salads, for example, are already being sold at the stadiums. The customer is willing to pay more money for healthier and better food.

TB: What are the most popular flavors at the Ballpark? Are they the same as those at your
other locations?
GD: The most popular flavor at the Ballpark is the Mint Chocolate Chip. As I mentioned before, the public at the stadium looks for the classics. We tried offering different flavors before but they would not sell, so we decided to stick to the classics. At the store location, I would say that one of the favorites is the Himalayan Sea Salt Caramel; it has a mild salted flavor to it.

TB: Do the carts at the Ballpark operate during concert days or only for game days? What is the major difference between games and concerts, as far as it concerns your business?
GD: Yes, we do operate on concert days as well, and the public is definitely different. On game days, people spend more time at the stadium, not only because the games are usually two to three hours long, but also because of the breaks the games have. This extra time allows the clients to enjoy their gelato. In addition, most team fans come to the Ballpark regularly, so they know we are there and know what to look for. Concerts are usually faster and have no breaks. People do not have as much “free time” to look for food. They attend for the concert only and most of them do not know the location and are probably going for the first time.

TB: How many people would you estimate that you serve per game day at the stadium?
GD: It is hard to say because it depends a lot on the weather. It can range from 1000 to 2000 people.

TB: What is the biggest lesson you’ve learned so far in the gelato business?
GD: Always keeping the gelato and the display cases at the perfect temperature is one of the keys for a successful gelato maker. If the freezer temperature is too cold, the gelato will get very hard and you won’t be able to use the spatula to serve people. The gelato is supposed to have a higher temperature than the regular ice cream, so I make sure it is always soft and perfect, whether at the Café, the truck or the carts. Balancing the temperature in all the different environments that my products are sold was something that I learned with time, and I think it is one of the simplest and most important lessons for this type of business.

TB: Dealing with public customers during games must make for some good stories and unusual situations at times. Any particular incidents that caught your attention?
GD: The very best story at the National Ballpark was last year during an afternoon game when a customer, after buying gelato from our cart, while walking back to his seat, got hit by a home run ball from Bryce Harper. The funny part is that the first thing the customer did was use the cold gelato cup to prevent swelling on his head. After he came back to the cart to get one more cup.

TB: What is the main thing you would want people to know about Dolci Gelati?
GD: I want people to know that we sell an Italian product that is made by an Italian guy who loves what he does. At Dolci Gelati we know what the authentic gelato is supposed to look and taste like, and we are proud to offer that to our clients. I teach seminars at The Gelato & Pastry Institute of America located in New York, because I think the education is something that people need. I always talk about how important it is to understand the measurements of each ingredient, how much sugar, how much milk. Whether Cold or Hot Process, it is essential to know what to use to make the real gelato. I wish there was a certificate for good quality gelato, just like there is for high quality pizzas; this way the authentic shops would be recognized more easily. Our main key at the Dolci Gelati is the authentic gelato and our passion about it.