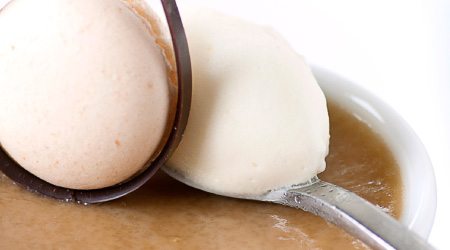 Creams are abundant in the pastry, baking and frozen dessert world. Each variety of cream such as whipping cream, light cream and sour cream serves a very different purpose and has its own unique properties. The key is to not get them confused and understand what and when a type of cream can be used and/or substituted for a recipe. For all of those seeking a 101 on creams, here’s your guide for the kitchen.

Cream (Overview): Generally speaking, cream is the fat that rises to the top of whole milk. Cream ranges in fat content and is generally characterized by its off-white, creamy and silky appearance. Creams with a higher fat content are thicker. Creams are usually either pasteurized or ultra-pasteurized, which helps with the shelf life and promotes safe food consumption.

Half & Half Cream: Just as the name says, it’s half cream and half whole milk. The butterfat content for half & half usually ranges between 10%-18%. The most common use for half & half is in coffee; however, it can also be a great low fat cooking tool to replace heavy cream. However, it does not whip like heavy cream.

Light Cream: Also often referred to as single cream or table cream, the butterfat content in this cream ranges between 18%-30% (20% is the percentage generally in a light cream). Light cream can also be used for coffee and/or cooking; however, it also does not whip.

Whipping Cream: Whipping creams contain between 30%-36% butterfat. The high content of butterfat allows the cream to whip up and maintain a structure. Whipped creams are generally ultra-pasteurized and some may even contain additional stabilizers and emulsifiers to increase the firmness of the structure. Whipping cream can be used for fillings in pastry. Heavy Cream or Heavy Whipping Cream: Even better for whipping and maintaining a structure, heavy cream contains 36%-40% butterfat. The high fat content allows the cream to whip up to double the volume and allows it to be used to pipe and decorate pastries in addition to filling them.

Double Cream: Containing a whopping 48% butterfat, this cream is extremely rich and can be easily over whipped. While it can also be used to fill pastries and pies it is not as commonplace as heavy cream.

Clotted Cream (Devonshire or Devon Cream): A cream often served in England with scones and fruit, clotted cream is created by heating unpasteurized milk until a layer of cream sits on top. The cream is then skimmed off once the mixture cools. Because it is heated, clotted cream carries a “cooked” flavor and is characterized by its thick, rich, yellowish appearance. The cream contains between 55%-60% butterfat and is so thick it is not used for whipping.

Crème Fraiche: A more mature version of heavy cream, crème fraiche is created by culturing pasteurized cream with a special bacteria or fermenting agent such as buttermilk or sour cream (unpasteurized versions usually naturally contain the bacteria). The cream usually contains 30% butterfat, but there is no standard for this cream so it can vary widely.4,5 The flavor is slightly tangy and nutty, and the texture is extremely velvety and rich. Crème fraiche is usually used as a dessert topping for berries, cobblers and pies, but can also be used in savory dishes as it doesn’t curdle when boiling.

Sour Cream: Sour cream is made by fermenting cream with lactic acid bacteria. The cream is characterized by its thick appearance and slightly sour taste. In the U.S. sour cream must have 18% butterfat to be called sour cream.6 Sour cream in the U.S. also typically has other thickening agents such as gelatin, rennet and other enzymes and flavoring components. While great as a condiment on its own, it is also used as a base for dips, sauces and batters. Light or fat-free versions tend to contain less cream or just milk.

Whipped Topping: Well, this isn’t a cream at all! Be careful when selecting a topping that may appear to be a whipped cream. A whipped topping typically contains hydrogenated vegetable oil and is void of any or all cream.

The varieties of creams and when to use them can be tedious, but keep this guide handy and it will help you navigate through. Have more questions on the intricacies of creams? Contact PreGel’s Professional Training Center and they will be happy to guide you as you conquer the world of creams. You can reach them via email at training@pregelamerica.com and/or by calling toll-free 866 977 3435.