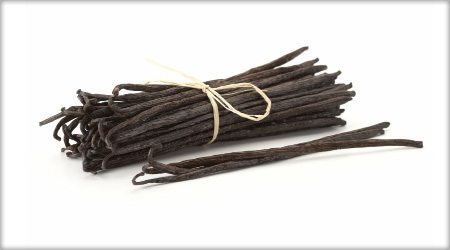 Normally, the thought of a raw bean brings the image of a hard, small seed that is flavorless to the palate and essentially unappealing to the eye. But in the case of the vanilla bean, the dark, wrinkled skin of the long, thin pod is the exact opposite in appearance and taste. While an exciting bean, it is very complex. It takes an enormous amount of time and work to develop the vanilla pod into the source of rich vanilla flavor that our tastebuds have to come to appreciate.

Vanilla Planifolia, the tropical vanilla vine that is native to the Gulf of Mexico produces 99% of commercial vanilla by way of the exotic vanilla flower it bears, which takes approximately three years to appear after the vine is planted, though pollination of the shrubbery varies by region. For example, the Melipona Bee, an insect that only lives around the Gulf of Mexico, can naturally pollinate a vanilla flower. Outside of that region, the striking plant has to be very delicately pollinated by human hands. This practice normally takes place in locations where commercially used beans are grown, like the largest French Polynesian island of Tahiti and Madagascar, the fourth largest island in the world located off the southeastern coast of Africa.

The long, dark-green to light-green fruit of the flower, which has yellowish highlights, is the actual vanilla bean, also known as the vanilla pod, though it looks more like an overgrown green bean.

The fruit containing a substantial quantity of tiny black seeds that make up the vanilla pulp, or caviar as it is sometimes called, receives nurture from the Planifolia vine for nine months. During this time it begins to develop its alluring aromatic scent, though this characteristic property of the fruit is not fully pronounced until the pod is completely cured in a very time-consuming, labor-intensive process.

Once the vanilla beans are harvested, they go through four stages of treatment, which, in total, last up to six months or more.1 The beans are soaked in hot water, known as “killing,” rolled in blankets to “sweat,” dried on flats in the sun to evaporate the water, and then stored in a ventilated room to slowly ferment.2 It is throughout this process that the vanilla bean develops its signature stick-like look, with dark brown, wrinkled skin that is covered in white “frost” known as vanillin, the enzyme that actually gives the highly coveted fruit its brilliant taste and scent.3

Much like all edible vegetation, the taste and quality of the vanilla bean greatly depend on where it is grown, and commercially, the most popular beans are Bourbon vanilla beans of the Vanilla Planifolia vine grown in Madagascar. These beans, which contain an abundance of seeds, offer a smooth, rich, sweet flavor and are the thinnest of the vanilla beans grown. Madagascar produces more than half of the world’s vanilla.4
The smooth, rich flavor and spicy, woody fragrance of the thicker Mexican vanilla bean, of the Vanilla Planifolia vine grown in Mexico, also fare well among culinary consumers. However, the short, plump Tahitian bean, of the genus vanilla tahitensis, which is native to Oceania, is the thickest of the three most widely used fruits and the darkest in color, yet arguably weakest in flavor in comparison to Bourbon or Mexican beans. Despite its lack of taste and seed pulp, the Tahitian bean is the most aromatic of the three, with complex floral aromas smelling of licorice, cherry, prunes or wine, and therefore widely used as an additive to scent perfumes.

Over 1,400 tons of vanilla are produced worldwide every year and for good reason. The irresistible bean, extract, powder and sugary spice is finely blended into almost every decadent treat we eat, perfumes we wear, soaps we utilize and even some medicines we take. Learn more about the culinary uses of vanilla on page 20.