A breakfast buffet sure to make anyone an early riser. (To download the poster as a whole, click here.) 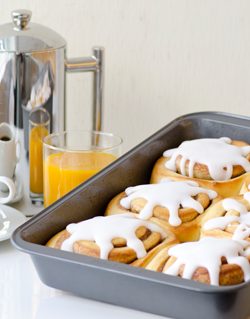 One day before baking:
1. Bring the eggs and milk to 65°F/18°C. Place all of the ingredients, except the butter, in the bowl of a five quart mixer. Mix with a dough hook at low speed until the dough comes together, 3–4 minutes.
2. Increase the mixer speed to medium and continue to mix for 6-8 minutes. The dough should pull away from the sides of the bowl.
3. Add the pliable butter in four additions, making sure the previous addition is fully incorporated before continuing.
4. Remove the dough from the mixer and place in a proofing container sprayed with non-stick cooking spray. Cover with plastic wrap and refrigerate overnight.
5. The next day, remove the dough from the refrigerator and shape into a rectangle. Sheet the dough to 6mm, always keeping the rectangle shape.
6. Sprinkle the cinnamon bun filling (see below) along the entire surface of the dough, leaving a one-inch lip at the bottom for the seal.
7. Brush the bottom of the dough with a light egg wash.
8. Roll the dough from top-to-bottom and seal the dough at the bottom.
9. Cut into one-inch units and lay flat on a baking tray.
10. Proof and bake at 350°F/176°C until golden.

Method of Preparation
1. Combine the brown sugar, flour and the 5-Star Chef Pastry Select Cinnamon Compound until smooth.
2. Using your hands, cut the butter into the mixture until it is crumbly.
3. Use as needed to fill cinnamon buns.

Method of Preparation
1. Heat the milk and the 5-Star Chef Pastry Select Vanilla Compound to 60°C/140°F.
2. Add the powdered sugar to the warmed milk mixture and stir constantly until smooth.
3. Use immediately to glaze cinnamon buns.