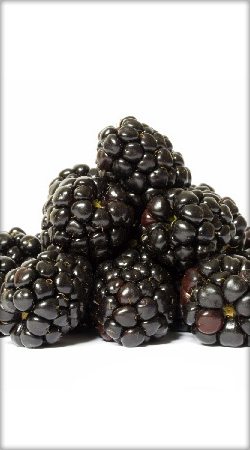 Once upon a time, during an era not too long ago known as the twentieth century, the blackberry was more synonymous with the delicious, edible fruit than the technological device used for the purpose of electronic communication. Today, the good news for zealous connoisseurs and cooks alike is that the blackberry fruit is still an essential ingredient used in an array of decadent epicurean delights that promise to leave customers more pleasurably stimulated than its technical counterpart.

The blackberry of the genus Rubus Ursinus of the Rose family (Rosaceae) is scientifically known as an aggregate fruit, meaning it is a fruit made up from a cluster of one-seeded druplets. The drupes are fleshy fruits consisting of an inner stony or woody endocarp, which adheres to the seed (similar to peaches, plums and cherries). The term druplet is used for each unit of aggregate fruit of this type.

Although the blackberry crop seems to have almost as many epithets as it has culinary uses, the monikers “Bramble” or “Cane berry” may be two of the most unique nicknames that brand the shrub. Cultivated mainly in northern U.S. states, these terms simply refer to any berry plant with a thorny vine, i.e., raspberries and blackberries. The blackberry can grow to be the size of an average adult thumbprint and is not to be confused with the smaller, fuzzy-skinned raspberry, another aggregate fruit. Further separating the two, the blackberry is a black, hairless, smooth fruit that is sometimes adorned with a red-purple hue.

The worldwide production of this fruit is close to one billion pounds per year. This mass production of the tasty fruit enables the creation of jams, pies, tarts, smoothies and flavoring for sophisticated pastries and frozen desserts like sorbet. This also includes when they are served fresh, canned or frozen!

The blackberry fruit is a pleasurable produce to eat no matter the application and a favorable choice is as a fruit for wine. Offering a mellow, earthy, “wine-like” flavor, its other epithet, “the cabernet of berries,” pays homage to its many offerings. The deservedly praised treat is not only great for the taste buds, but also the body and here are some reasons why.

As a source of insoluble fiber, the blackberry allows the large intestine to absorb excess water, which promotes digestive health by way of contributing to regularity. In addition, the ellagic acid that blackberry fruit contains slows the growth of malignant tumors and kills cancerous cells, according to lab studies conducted on animals. Amazingly, they are also known to reduce the growth effect that the female hormone, estrogen, has on breast cancer.

The high levels of Vitamin C in blackberries also make them a worthy contender against common colds. The magnesium in these bite-size health boosters promote cardiovascular health by relaxing the arteries and blood vessels within the body, thereby allowing oxygen-rich blood to pass more easily to the heart. An added bonus of enjoying the blackberry fruit is that the pectin and soluble fiber it provides are known to lower LDL, aka “bad” cholesterol, levels with every juicy bite.

With a name so plain and befitting to its visual appearance, this small, wild-growing produce has demonstrated itself to be a perfect companion for any sweet or savory application, and even as a stand-alone treat. Combined with its plethora of nutrient-rich benefits, it is almost amazing that so much goodness can be found in one small cluster of blackberries.