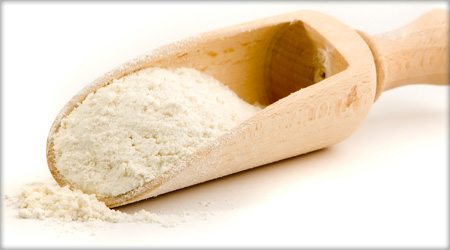 As diets and societal trends have evolved, so has our use of wheat flour–a principle grain and staple food item in our everyday diet. The Economic Research Service (ERS) division of the UDSA estimates that U.S. per capita consumption of wheat flour averaged 137 pounds in 2008. This number is down from 225 pounds per person in 1879, yet is up from 110 pounds in 1972.1 Taking a closer look at the different types of wheat flours, will help you choose the best options for use in everything from sponge cake to pizza dough.

The wheat kernel, the seed of the wheat plant, is composed of three separate parts that are used or discarded during different stages of the milling process, depending on the type of flour being produced. The endosperm is the inner portion of the kernel and accounts for approximately 83 percent by weight of the wheat kernel.2 The endosperm is used to produce white flour and contains the greatest concentration of carbohydrates, protein (including gluten-forming proteins), soluble fiber and vitamins. The bran is the outer protective covering on the wheat kernel, accounting for about 14 percent by weight of the whole kernel, and is included when milling whole wheat flour.3 This hearty portion of the wheat kernel is largely desired for its high dietary fiber content as well as various vitamins and minerals. Making up only about 3 percent of the wheat kernel, the germ is the sprouting section (embryo) of the wheat seed that is extracted during white flour milling (yet generally included in whole wheat flour milling) since its nearly 10 percent fat content limits the shelf-life of wheat flour.4

While all wheat kernels are anatomically equivalent, there are variations among the plant. The first division is between spring and winter wheat, which are simply described by the season in which they are harvested. Winter wheat is most common because though it has slightly lower protein levels than the spring wheat, it is generally considered to be of a higher quality. The next division is between hard and soft wheat, the former of which has a higher protein content and the latter higher in starch. Finally, flour may be milled from the red or white wheat plant. Red is the original and most common type, while the white was added to the U.S. market within the last 20 years–marketed for its lighter color and milder, sweeter flavor profile. Flour millers use various combinations of spring/winter/hard/soft of either red or white wheat to create the desired flour profile, depending on the final application and the demands of the baking industry.

Now having a closer understanding of the wheat plant, let’s take a look at the different types of wheat flour that you are most likely to find:

Many all-purpose flours are bleached with either benzoyl peroxide or chlorine gas, creating a pure white color and increasing the shelf life. Though this controversial chemical processing has not been proven to pose any health risks, bleaching removes the nutritional value naturally provided by the wheat endosperm, which is why wheat processors are required to re-enrich the flour with vitamins and minerals prior to selling. Unbleached flour is whitened naturally by oxidation during an air-aging process.