This issue of Views from the Tree, we are toasting our neighbors up north at our Canadian subsidiary (if you turn to page 11, you will also find a Q&A with two of our Canadian customers) So similar yet so different, the subsidiary and employees, the market and the customers are relatable to U.S. specialty dessert experience but completely unique in their own right. 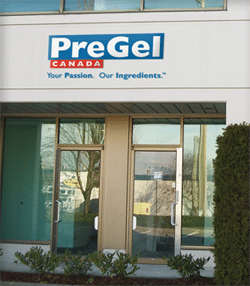 The Subsidiary and Employees
PreGel CANADA opened its doors in Woodbridge, ON, in 2008 and today employs eight employees, nine if you include Subsidiaries Manager Jeannette Pantani, who was featured in Issue 14. In 2011, PreGel CANADA opened its second branch in Surrey, British Columbia (just outside of Vancouver), and became the first North American subsidiary with a training facility at both locations. PreGel CANADA continues to grow year after year and is firmly planting its roots in the market with its bi-coastal presence, continued participation in top trade shows such as the Canadian Restaurant & Foodservice Association Show and BC Foodservice Expo, and its involvement with associations such as the Canadian Pastry Chef Guild. The employees at both locations together present an impressive resume of experience in the food industry as well as a knack for staying healthy and fit. In the Toronto office, six faces run the day-to-day operations:

• Luca Costella, Sales Manager
Costella originally heralds from Vittorio Veneto, Italy. Both a gelato master and pastry aficionado, Costella, who enjoys hunting with his English Setters and cycling, found relocating to the wilderness of Canada was a natural fit for him.

• Daniela Saccon, Office Manager
If there’s one thing Saccon is passionate about, it is food. Prior to joining PreGel she sold blast freezers, and she loves being in the kitchen. Her other interests include her English Setters, yoga and gardening. Saccon is fluent in Italian.

• Jim Theophilos, Sales Representative
Theophilos was raised in the kitchen. At age 10, he started with his family’s restaurant and has since had his hand in all aspects of foodservice from craft service on movie sets to managing full service restaurants. To balance his passion for food he is an avid fitness enthusiast and gardener.

• Vita Ingoglia, Special Service Representative
Ingoglia’s introduction to the food industry began early at her family’s grocery store. She has since held various positions in foodservice. Fluent in Italian, she keeps herself busy between her two children, including her son’s extensive hockey schedule, and Zumba classes at the gym.

• Tracy Kao, Accountant
Years of experience working production in her family’s gelato shop and a cake decorating certification made Kao a natural fit for PreGel. Kao is fluent in Cantonese, and when she’s not balancing numbers she’s busy shuttling her two daughters to their numerous extracurricular activities and working on home improvement projects.

• Mauricio Cornejo, Warehouse Specialist
Cornejo is fluent in Spanish and is an avid fan of soccer. Cornejo is the soccer coach for his son’s community team (he’s led them to three indoor and three outdoor championships) and is working toward his official soccer coach certification. He relishes being a dad, shuttling his son around and being there to help with homework.

Rounding out the group are the team members at PreGel CANADA – West Coast Branch:

• Andreas Kieselbach, Western Region Account Executive
Kieselbach is a pastry chef by trade and owned a bakery for 10 years. Fluent in German, his interests include gardening, cooking, holistic medicine, his Bull Mastiff and designing jewelry with rocks that have healing powers.

• Lynda Judson, Warehouse Specialist
When Judson isn’t overseeing the incoming and outgoing shipments of PreGel CANADA, she spends her time playing league soccer, softball, volleyball and rooting for her team, the Green Bay Packers. She also loves spending time in the kitchen cooking and playing with her Labrador/Rottweiler.

The Market
A cliché analysis of Canada would showcase a staunch loyalty to the country, hockey, English words spelled with a “u” (flavour, savour and colour) and Tim Horton’s reign over Starbucks as what differentiates Canada from the U.S., but the current landscape of the consumer market and the food industry reveals some very specific standout features about the True North country.

What stands out most about our northern neighbors? Well, aside from their passion for food and the great outdoors, the weather! Canadians spend many months wrapped up in warm coats, and therefore have a very short summer; on the West Coast they stay bundled but mainly from the rain. For frozen dessert businesses the key to success is to take advantage of the warm and sunny days as much as possible. However, with this in mind Canadians probably understand better than most the need for viable day parts, as many shops incorporate bad weather fare such as coffee, soups and pastries. But don’t completely rule out frozen desserts. Having acclimated to the cold and rain, some consumers aren’t afraid to grab a gelato.

The other notable differentiator in the market is the focus on healthy eating, fresh-made foods and buying and using local when possible. Intertwined with more European and Asian influences, Canadians truly appreciate how their food is made, what goes into it and that it promotes health. The vast resources of the many regions of Canada promote a food industry where locally made and local infusions in fare are an important value-add for businesses. Products labeled with a Made in Canada seal, and that carry a certain authenticity in terms of ingredients and hand-made production, are sought-after and highly revered by the country’s consumers.

While health-focused food is big business, Canadians also love to indulge from time to time in traditional, rich comforting foods; if they are going make an exception, you can bet it probably includes one of these: Nanaimo bars, butter tar ts, bread pudding, apple pie, blueberry pie, pumpkin pie, rhubarb pie, blueberry grunt, strawberry shortcake, maple pudding, apple dumplings, shortbread or lemon tarts. Don’t forget the natural but sugary goodness that Canadian maple syrup brings as well; this is and remains a food central to Canada, but is globally sought-after as well.

The food culture and market in Canada is evolving quite a bit, and it’s an exciting time to witness and be a part of it. PreGel CANADA is yet another part of what makes PreGel as a company both fascinating and truly global.