There are brands that have proved staying power time and time again. One of the best examples is Kleenex®. Most of you reading this would agree you have more than often uttered the phrase “ I need a Kleenex®,” which of course is the brand. You should be saying, “I need a tissue.” These types of brands (for example: Oreo®, Clorox® Bleach, Hershey’s Chocolate Bars and Downy®) have been around for years. While they have established themselves well within society, part of remaining at the top is the race to remain relevant as competitors continue to enter the market. To do this, a major strategy being employed is seasonal and innovative limited-editions of the product. The strategy is one that does in fact accomplish the goal of being timely and trendy, but it also begs the question: does adding all these varieties mean that the original brand can no longer defy the ages on its own? It’s a debate worth pondering.

The Argument for LTOs and Innovation 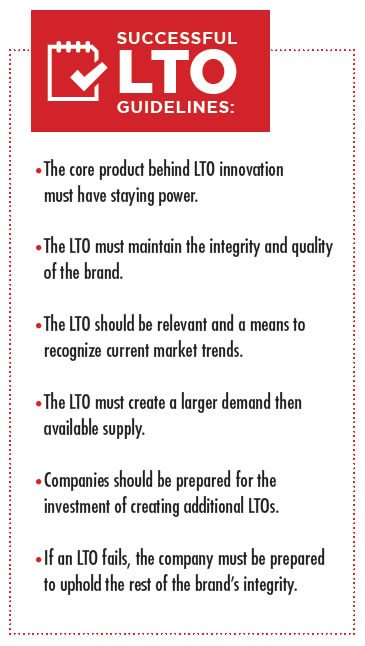 Staying relevant and changing with the times means understanding the buyers in the market. There are more options than ever out there in the marketplace, and rising above the noise is not as easy as it has been in the past. The new generation of buyers (Millennials) like customized options. All generations revere nostalgia, meaning they buy into things such as the seasons, holidays and any throwbacks that remind them of the past. They also like to feel a part of something unique and special, and this is where limited-time offers ( LTOs) and innovation sweep in and take hold.
To brands leading this innovation, it’s not about going against core products – it’s a simple and easy way to stay relevant, test new products and reinforce the brand. Thomas® English Muffins and Oreo® are two great case studies; recently both brands introduced new flavors and seasonal variations with limited production. Oreo® has been pushing the envelope, releasing trendier versions of its signature chocolate and crème cookie sandwich such as banana split, cookie dough, strawberry milkshake and caramel crème. Varied product offerings of Oreo® are nothing new, but the influx of more flavors is a more recent endeavor and it’s receiving mixed reactions. Whether good or bad, the hard fact is that people are talking about it. And for those already loyal to the Oreo® brand, the worst-case scenario is they try the new cookie combinations and discover there’s nothing like the original, paying homage to the core brand product.
Another brand utilizing seasonal LTOs to ensure relevancy is Thomas® English Muffins. The brand this year has launched LTOs that included Apple Pie, Cinnamon Vanilla, Pumpkin Spice and Cranberry. In a press release, the company attributed these additions to research that consumers were seeking dessert-inspired goods earlier in the day which they could recreate with their products. Branching out has been met with success due to both supply and demand, and refreshing the brand with something new. When those LTOs run out, the idea is that the consumers will go back to the original good ol’ standbys. And again, if they don’t like the new item, they will also revert back to the original product. Presenting LTOs is about piquing the curiosity of the consumer, sometimes converting them but at the very least always providing options congruent with the times.
It’s also about creating additional revenue streams – LTOs not only attract new buyers due to flavor preferences and curiosity, but also provides an excuse for existing customers to both buy the original and test something new. The argument here is that LTOs aren’t cannibalizing the core brand product because loyal customers will continue to buy what they like, but new LTOs may add to the bill for existing customers.
Last, the argument for innovation and LTOs must rely on the fact the original brand product such as Oreo® can stand on its own even if an LTO fails. The fact is that brands with staying power have a greater ability to innovate because they have a pre-existing and solid foundation in their category space. If the LTO fails, it doesn’t matter, because the brand integrity remains high and the value of its original products still resonates.

The Argument for Refreshing and Reintroducing Original Products

On the other side of the coin, innovation and LTOs are expensive – they’re an investment, require additional manufacturing, marketing, and the tab may exceed the demand. The question of quality also comes into play as the rush to meet current trends can lead to cut corners potentially degrading the brand altogether. Even if an LTO does meet the quality standards, there’s also the concern of rising above all the existing LTO noise and excitement in the marketplace. Pumpkin is a great example of this, as now there’s pumpkin everything. What’s so exciting if cookies, breads, frozen desserts and spreads all contain it? It’s complete overload! With all these considerations the other argument stands that brands should focus on reinventing their existing products and forget feeding into the LTO frenzy.
Getting back to the basics is a strategy many major brands have circled back to over the years, including Coca Cola, Wendy’s and Domino’s. The focus is more on reinventing their core product to defy the ages. To achieve this, the brands employ tactics such as rebranding campaigns, recipe formulations to be the best and/or just reinforcing to the public why the brand has maintained its leadership over the years. Both Wendy’s and Domino’s are great examples of recipe reformulation for different reasons.
The competition for burgers has grown tremendously over the last five years, with Five Guys, In and Out, Smashburger and a dozen other QSR and fast casual burger concept growth, and with quality at the heart of the brands. Wendy’s, though it still held steady in rankings in surveys such as Zagat, needed to refocus and in 2011 completely reformulated a “better” burger. Wendy’s core product was answering the latest trends in the food industry including more natural ingredients, thus ensuring it would not be pushed aside while other burger joints popped up. While this year it did get in the LTO game with its pretzel bun launch, the noise was not as loud as the reformulation or even its back-to-basics campaign prior to that which brought the iconic Wendy back into the advertising game.
Domino’s is another reformulation success story that simply knew it had to look in the mirror to gain continued success. The truth is no LTO was going to fix the brand. It needed its signature item, pizza, to be better. It not only recreated the taste but was very vocal and transparent about it. While many would agree that Domino’s was not a first choice, it still had one thing going for it, brand recognition having been a major pizza player since launching in the 1960s. What it needed to do was reinvent itself to stay relevant for consumers and what consumers wanted was a better, tastier pizza. The company delivered just that and saw an immediate 14.3% growth in the quarter of the launch, as reported by USA Today.
The Coca Cola Company’s Coke is another interesting study, as there are many variations of the original Coke recipe, especially with the new Freestyle machine. But when it comes to the original formula the marketing investment clearly belongs to the core products of Coke, Diet Coke and Coke Zero. Rather than push all the iterations of Coke flavors, the company time and again puts its focus on the brand through the seasons and ages. Recently, the personalization campaign “Share a Coke” reinforced the brand but spoke to a generation that likes customization. What’s more customized than your name or a friend’s name on a can? As we enter the holidays, we can also be assured that Coke will be right there with us whether it’s a throwback Santa, polar bear or new campaign, because the company understands the value of having its products be a part of life experiences. LTOs are momentary experiences. If brands focus on what will always be a part of their portfolio, they can create a lifetime of experiences with the product.
The Verdict

In the case of Invest in LTOs or Stay True to Core Products, the jury is hung. There is no right or wrong answer, as you can find successes and failures in regard to both. What it really comes down to is following guidelines and staying true to the brand integrity overall. The only truth is that a core product such as Oreo® or Coke must alone be able to continue to both penetrate and lead the market year after year before LTOs can become options. LTOs are one path to brand innovation and can be immensely successful in building the case for brands to defy the ages.