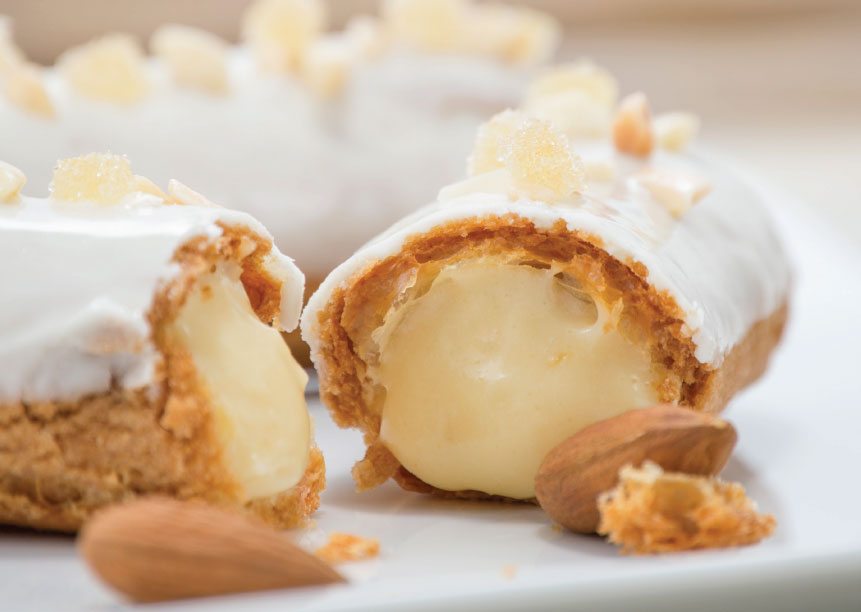 Who ever thought the day would come when cupcakes would no longer be at the top of the charts in the pastry world? Seeing as that which was old is currently making a resurgence, so enters the luxury éclair.

In this article, when we mention éclair (meaning lightning in French), one might have thoughts and images resonant of a relic doughnut concoction stuffed with bland vanilla pastry cream and thick chocolate frosting, but oh, how times have changed.

Luxury éclair shops are popping up all over the world from New York to London. These “masters of choux” offer high-end fillings, intricate décor, and the freshest ingredients, which help offset the once overlooked pastries.  You may ask ‘what quantifies me buying a $7 éclair?’ Well, there’s no question that a sort of renaissance is playing out in the world of pastry with a sort of haute couture makeover of the French classics. New flavors, textures, colors, and flourishes all add an extraordinary flair to a once blasé concoction. In my opinion, the éclair is a true test for a good pastry chef, and for some it is a specialty that will remain a challenge to obtain perfection, which makes this pastry classic a very special and unique commodity.

Today’s marketplace can feel sometimes like a kaleidoscope of trends. Whether they’re label claims, marketing strategies, or simply based on a certain indulgence, there’s something to be said of anything that garners attention in the mainstream market such as eclairs have. With bakery businesses across the U.S. approaching $50 billion in sales a year according to the most recent data from The Nielsen Company, a global information, data, and measurement company,  it’s no wonder this trend can make you some serious dough, literally.

Perhaps one reason why the reemergence of choux is so dominant right now is because of the amount of high quality bakeries and pastry shops opening around the U.S. Credit must surely be extended to innovative pastry chefs such as Dominique Ansel whose claim to fame was the Cronut® and garnered the general public’s attention to what fine pastry could be. Across the Atlantic Ocean in France, Chef Christophe Adam is literally the “Éclair Genie,” or L’Eclair de Génie, as his five-year-old Parisian patisserie is appropriately named.

Well, one could say innovation, another could say ingredients, and another might say technique. When it comes to choux, all are fair game.  Whether it’s sweet or savory, éclair or religieuse, paté a choux is something that’s been around since the year 1540, and, in my opinion, eclairs are here stay.