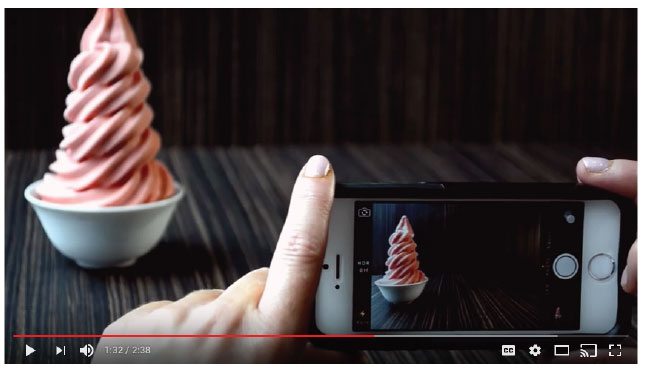 According to spoonuniversity.com, a food-related online publication, the scientific term “visual hunger” describes our natural desire or urge to look at food imagery. Further explanation suggests that before we enjoyed the convenience of purchasing store-bought food or take-out, we were hunter-gatherers who relied heavily on our vision to identify and locate food. Our brains evolved to enjoy the sight of food, thereby exciting our brains’ reward pathways at the notion of nourishment and survival via food.

The sight of food speaks volumes, and we’re hard-wired to go for more appetizing choices because of an “odd quirk” in animal behavior, Homo sapiens included, discovered by Dutch biologist Nikolaas Tinbergen. As reported by theatlantic.com, the online publication of The Atlantic, Tinbergen realized that, across species, the animals in his experiments seemed to prefer prettier, flashier, more attention-grabbing versions of their natural environments, even when those elements were fake. Nikolaas referred to these eye-catching attractions as “supernormal stimuli.”

Examples of this observation include certain types of fish becoming more violent towards dummy fish whose undersides were more vibrant than the species’ usual color; and mother birds that would ignore their own eggs to sit on a nest of larger, more colorful imitations, or divert food from their children to feed models of chicks with brighter beaks.

With so much gastro-based eros dominating media via print, television, social media videos, and still images, a throng of followers and influencers was bound to be conceived, giving birth to a digital foodie nation where Instagram is the capital.

In regard to this theory, psychiatrist Deirdre Barrett noted that the essence of the supernormal stimulus is that the exaggerated imitation can cause a stronger pull than the real thing. Such is the case with embellished presentations of our favorite foods and desserts, perfectly plated, with all the right color contrasts and ingredient combinations to pique our cardinal desire for food. Nowadays, in the era of technology, social media is the perfect avenue for showcasing stunning visuals and advertising new food concepts that gain notoriety for chef innovation as well as the establishment (s)he represents. According to emarketer.com, at least 71.0% of internet users worldwide will access social networking sites regularly this year. Additionally, 2.46 billion individuals, or one-third of the global population and 71.0% of internet users, will access social networks at least once a month, up 8.2% from 2016. That could pan out to be a lot of recognition, with published images under the control of the dessertpreneur in this case.

With so much gastro-based eros dominating media via print, television, social media videos, and still images, a throng of followers and influencers was bound to be conceived, giving birth to a digital foodie nation where Instagram is the capital. According to The New York Times article, “Why Instagram is Becoming Facebook’s Next Facebook,” (Facebook owns Instagram), the image-driven platform boasts about 700 million people who use Instagram every month, with about 400 million of them checking in daily. With that many viewing eyes, it’s important to take tempting images of your culinary creations in the most effective way.

It was reportedly Roman gourmand Apicius who coined the term “the first taste is with the eyes.” And when you’re in the business of selling culinary goods, you have a responsibility to ensure your consumers’ “first tastes” are the best you can offer. As reported by digital-photography-school.com, there are several techniques for taking amazing pictures, and then there are steps for creating truly titillating food-focused imagery:

PreGel features a tutorial on its Youtube channel called “6 Tips for Eye-Catching Desserts Using Your Smartphone.” Seeing as everyone does not own top-of-the-line photography equipment; may not be a wiz with the camera; or has a budget that does not currently allow professional food shots, your mobile device might be the best alternative. Yielding advice that is specific to photographing frozen treats including how to remove frost from your desserts, using toothpicks to prop up fresh fruit garnishes in gelato pans and soft serve, and focusing in on the details, the video parallels advice given to effectively trigger the viewer’s ghrelin—a hormone that causes hunger. In fact, a 2012 study found that just looking at pictures of food may be enough to cause a spike in ghrelin.

With that being said, it’s easy for businesses like yours to capitalize on this trend. Whether picture perfect

or enticingly real with dripping sauces or mile-high whipped cream, once you click your images, upload, and publish on your social media platform(s), consumers will get to know your style, your innovation, your worth, and most importantly, your appeal.