There is something whimsical about soft serve.

I’m not sure if it’s the creamy texture or its multi-layer swirl, but now in 2017 soft serve can be found presented with an edible floating cloud of cotton candy, only enhancing the whimsical appeal. Acquas in Sydney, Australia and MilkTrain in London, England are two of the few frozen dessert establishments to recreate the soft serve experience this way. Picture this: a milk chocolate soft serve in a waffle cone surrounded by a bed of “candy floss,” as cotton candy is sometimes referred to by the English,  or “fairy floss,” as the popular carnival confection has been deemed by the Aussies.

One’s first thought of the sweetly embellished chocolate soft serve waffle cone may be, “Wow, my cone is floating!” This kind of fairy-like dessert could 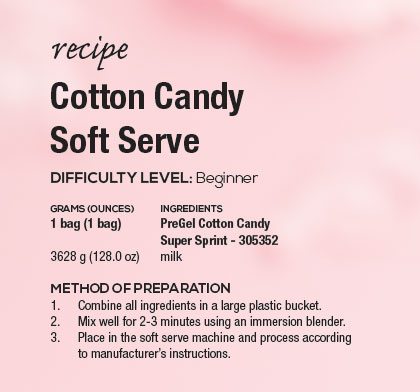 Although cotton candy was developed over 100 years ago, the confection continues to captivate the American consumer. The light and fluffy texture of the flavored strands of melted then re-solidified sugar has been a favorite of carnival goers for years (probably because it was introduced to Americans at the 1904 World’s Fair). And just like soft serve, cotton candy instantly melts in your mouth on contact. So it’s not hard to conceive that a soft serve with the flavor of cotton candy could be a popular menu option for gelaterias and ice cream shops across the country.

Though the airy sugar confection is available in endless colors and flavors, the two that seem to resonate most with consumers is blue raspberry and pink vanilla—apparently wonderful complementary flavors for other soft serve selections as well.  Nevertheless, cotton candy soft serve surrounded by cotton candy could elevate this trend to the next plateau. Coincidentally, cotton candy was reportedly invented by dentist William Morrison with confectioner John C. Wharton. Despite his job being to maintain oral health, it’s hard to imagine Dr. Morrison would not be pleased with the sweet irony of cotton candy in its original form combined with the cotton candy-flavored soft serve making people smile