Creamy, fruity and alcoholic milkshakes are making a comeback in the food industry this year. Following the cupcake and frozen pop craze, nostalgia is showing little sign of slowing down on the food scene with this year’s new craze, reinvented milkshakes. The long-time American favorite, commonly called “shakes,” are commemorated by two national holidays on the food calendar: National Vanilla Milkshake Day is celebrated on June 20 and National Chocolate Milkshake on September 12.

Consumers indulge in milkshakes year-round, taking advantage of the creative and seasonal twists foodservice operators develop, and 2014 is expected to be filled with innovation. Milkshakesare an easy menu expansion and boost revenue at a minimum effort.
The History of Milkshakes
Long before the smoothie, the slushie or the frozen yogurt, there was the milkshake. The name “milkshake” was firstintroduced in 1855 and the drink was considered a tonic drink with whiskey according to The History of Milkshake by Walgreens. Usually given as a remedy to patients at the time, the milkshake was considered a health food. The blend consisted of eggs, milk or cream, and whiskey; and was also served to children with digestive issues, without the liquor. Before the invention of the electric blender by Steven Poplawski in 1922, the drinks were simply shaken by hand and the consistency was similar to the thickness of eggnog. After its invention, the blender greatly improved the milkshake and what we now recognize as its cold and creamy consistency. In the article “Malted Milk: Its Cool History,” the Los Angeles Times explains how the same year, William Horlick invented malted milk, which was used in milkshakes and drunk more for pleasure than as a digestive remedy or tonic. In 1922, Ivar Coulson, an employee at a successful Walgreen drugstore in Chicago, IL, mixed together Horlick’s malted milk, some vanilla ice cream and chocolate syrup and blended it in the new electrical blender.  With that the “chocolate malted milk” was born! Malted milks became a big success thereafter and still are today.
Modern milkshakes are far more sweet and indulgent, but to 19th Century foodies, the milkshake was more a cocktail than a dessert. Today, hand-blended milkshakes can be made from any flavor of ice cream. Additionalflavorings, such as chocolate syrup, malt syrup or maltpowder, can be added prior to mixing. According to QSR magazine, restaurants with high trafficvolume such as McDonald’s often choose to use pre-made milkshake mixes that are prepared in automatic milkshake machines. Some fast-food restaurants such as Dairy Queen prepare their milkshakes by blending soft-serve ice cream with sweetened, flavored syrups such as chocolate syrup andfruit-flavored syrup, and milk. Pre-made milkshakes aresold in grocery stores in North America and the United Kingdom (UK). These drinks are made from milk mixed with sweetened flavored powde, artificial syrup orconcentrate, which would otherwise be called “flavoredmilk,” thickened with carrageenan or other products. 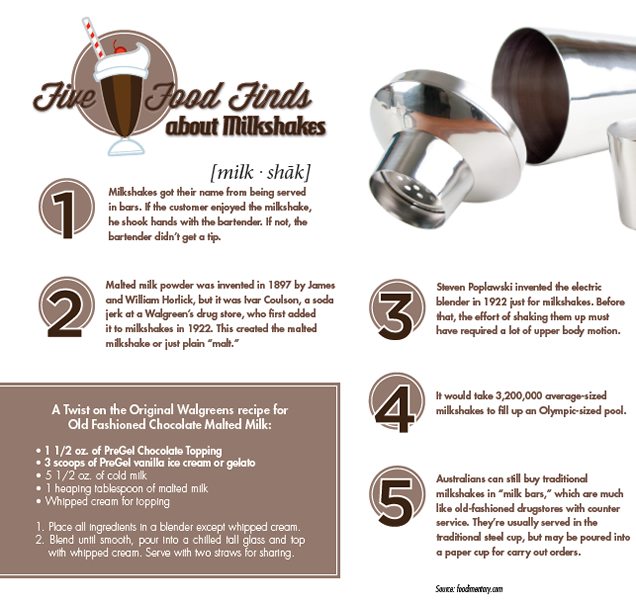 Milkshakes Abroad and Onboard
Milkshakes are famous all over the world but carry different names and recipe variations. In New England and Canada, for instance, milkshakes are called “frappes,” which means “to ice” in French, or “velvets” – especially in northern New England. While frappes are mostly known in America as iced drinks, these don’t necessarily contain ice cream, but do have ice, milk and flavoring. Latin American consumers prefer their “batido”flavoredwith fresh fruits, as in many other parts of the world. Latin Americans usually use fruits grown locally, such as mango, banana, pineapple, papaya, kiwi and other exotic, delicious fruits. In the UK, people call the milkshake a ‘thickshake.’ Following the UK, the trend of “milkshake bars” is now trending in Ireland where small shops and franchises are dedicated exclusively to milkshakes. Favorite milkshake flavorsin Asia are avocado, spicy chocolate, melon and coconut. In Northern Italy, “sgroppino” is a popular lemon milkshake made with lemon sorbet and sparkling wine. In Australia, people craving a milkshake will rush to a “milk bar.” Milk bars today generally sell ice creams, milkshakes, sweets, chocolate bars, soft drinks, newspapers, bread and occasionally fast food. Although there are far fewer milk bars than there were during the 1970s and 80s due to changing shopping habits, most people living in suburban areas still have a milk bar within walking distance or a short drive of their home.
New at sea, milkshakes are now onboard Carnival cruise ships for the pleasure of tourists. At their Shake Spot, the new line of drinks includes classic and adult versions, such as the already popular Spirit of Kentucky, which combines vanilla ice cream with bourbon and caramel syrup. A signature shake called Vanilla Sunshine mixes vodka, vanilla ice cream and orange soda. Those looking for a more tropical feel can try the Dark and Stormy and Cuba Libre cocktails or a spiked root beer floatwith vanilla rum adding the kick.
Turning Classics into NoveltiesMilkshakes are officiallya trend. “We are seeing quite a bit of more indulgent, more interesting, and more innovative items coming out especially from fast food,” says Darren Tristano with food industry research group Technomic. Milkshakes are one of them. Today’s milkshake popularity lies in the nostalgia from summers past, youth and indulgence. The old-fashioned treat has successfully been reinvented to please kids and adults likewise. Everyone of a certain age knows what a shake is. They’re back, but without the super sweet syrups and fake cream toppings of the last century. Now it’s all about artisanal syrups, house-made ice cream and organic milk – pure and simple.
While the traditional flavors of chocolate,vanilla and strawberry are still popular, blended shakes with brands such as Oreo®, Nutella® or Twinkies® are gaining traction. Seasonal offerings such as the Shamrock Shake (Mint) from McDonald’s around St. Patrick’s Day celebrations and pumpkin during the fall are also contributing to the milkshake’s resurgence. One variety in particular that’s finding its way into eveyone’s kitchen: the cereal-flavored milkshake. This dessert aims to reproduce the taste of milk after it has been soaked with cereal. The trend is also taking off in restaurants. Momofuku Milk Bar in New York, for instance, offers soft-serve cereal milk that takes on the flavors of popular cereals such as Fruity Pebbles, Cap’n Crunch and Lucky Charms. It also has a generic cereal milk flavor served with crunchy corn flakes. o go along with the treat, the establishment offers the cereal as a topping to really push the cereal taste along with a crunchy texture.
Adult milkshakes constitute another popular twist on the original shake. It’s fairly easy to create an after-dinner treat just for the grownups by adding liquors and spirits such as a hint of black raspberry liqueur or a dash of bourbon into the mix. Bartenders around the country are shaking up the seasonal staple. Some chefs are now including grown-up desserts in their offerings with items such as a prosecco float made of honey gelato, honey-infusedwhipped cream and prosecco. Red Robin, a burger chain, has released a wine and fruit milkshake for its spring menus: the Mango Moscato Wine Shake combines Moscato, SKYY Infusions Moscato vodka, mango puree and vanilla soft-serve ice cream. An original sweet-savory combination spotted in a San Francisco Restaurant is a foie gras milkshake featuring foie gras ice cream and walnut liquor. And because there’s room for more than one questionable milkshake combination, Texas created a beer and bacon milkshake. Levys Restaurants and the Texas Motor Speedway have partnered to create the Shake ‘n Bacon Brew, a milkshake made with Blue Bell vanilla ice cream, Rahr & Sons Ugly Pug Black Lager, bacon-infused maple syrup, whipped cream and a bacon garnish.
With worldwide popularity, the milkshake has traveled through centuries to adapt to its fans’ changing needs. Today a huge trend in desserts, the drink is continuously being reinvented to include seasonal and adult twists and can be found anywhere from quick service restaurants to sophisticated fine dining menus.