Pastries are sophisticated and elegant desserts that demand high expectations from customers. They aren’t the easiest to craft and understand, often taking years of culinary schooling to perfect. Pastries often have unpronounceable names because of their provenance, but these delicacies are big players in the food industry and thus deserve a basic understanding.With similar names and slight preparation variations, it is possible to get lost when navigating the world of pastries.The art of making pastry cannot be left to approximation, and entering the business requires learning the basics, traditional techniques and preparation divergence. Understanding some of the basics, common misconceptions and recipes based on their country of origin is a great starting point for those interested in breaking into pastries or educating those who simply enjoy them.

The macaron is often confused with the macaroon. It’s high time to set the record straight: the word “macaron” is not another way of spelling macaroon.The two terms refer to two different things. Both macarons and macaroons are confections, and both names are coming from “ammaccare,” which means “to crush” in Italian — but it’s all they have in common. A macaron is a meringue-based cookie made with almond flour, egg whites, granulated and powdered sugar, filled with a ganache, jam or paste. The delicate treat has a crunchy shell and produces a soft sensation in the mouth, almost like a nougat in its chewiness. In contrast, a macaroon is a moist and dense coconut treat, which is composed of egg whites, sugar and dried coconut, often made with a star-shaped tip, and sometimes covered with chocolate.

The macaron is a big star in the pastry world. Artisanal, delicate and charming, macarons are the most elegant sandwich cookie that exists. Made in a variety of original flavors with decadent fillings, it consists of a delicate round, colored meringue. Macarons have become trendy to serve during brunches, bridal showers or wedding receptions.They make a delightful morning treat with a cup of tea or a perfect sweet finishing touch to a lunch with an espresso. Macarons require more patience and finesse than any other cookie recipes. Achieving the perfect texture, domed tops and wrinkled edge can be tedious if any little step is missed during this complicated recipe.

Probably the most famous Sicilian pastry, the cannolo, which is a crust filled with cream, got its name from its long tube-like shape. During the Middle Ages, they were prepared as a treat during Fat Tuesday season and eventually became a year-round treat throughout Italy. Originally, honey was used to sweeten cannolis. Mascarpone was the original cheese for the filling, but ricotta has become more common.

The versions with which Americans are most familiar tend to involve variations of the original recipe. The theory is that Italians who emigrated to the U.S. in the early 1900s had limited availability of certain ingredients. The cannoli found in Italian-American bakeries today usually still contains ricotta, but mascarpone is a less common alternative. Sometimes the filling is a simple custard made of sugar, milk and cornstarch or pastry cream.The cream is often flavored with vanilla and a light amount of cinnamon. Crushed pistachios, small chocolate bits, and candied citrus peel or cherries create the little dots at the open ends of the pastry. 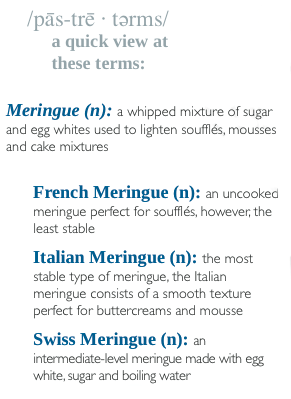 MERINGUE: FRENCH vs. ITALIAN vs. SWISS

A meringue is a whipped mixture of sugar and egg whites used to lighten soufflés, mousses and cake mixtures. It is commonly used in the U.S. to make pie toppings and desserts like Baked Alaska. There are three ways of making a meringue, and the difference between the French, Italian and Swiss lies in when and how the sugar is added.

The French meringue is an uncooked meringue and the most popular one.The sugar is gradually added and beaten with egg whites once they have reached soft peaks, and then the mix is whipped to create firm peaks. This type of meringue is the least stable but also the lightest, perfect for soufflés.

The Italian meringue is the most stable of all the meringues. It is made with a sugar syrup that has been heated up to 240°F.The hot sugar syrup is gradually beaten into the egg whites after soft peaks have formed and then whipped to firm glossy peaks. Its stability and smooth texture makes it great for egg white buttercreams and mousses.

The Swiss meringue is an intermediate-level meringue made by whipping egg whites and sugar over boiling water until the sugar has dissolved, and then removing it from the heat and beating it slowly until cool and firm. More stable than the French meringue, it is not as hard as the Italian meringue.

Unlike the traditional custard used in American recipes and the French crème caramel, crème anglaise and pastry cream are custards intended to be mixed with other dessert ingredients. Both add a smooth creaminess to fruit and pastry confections but they cannot substitute eachother.

Crème anglaise is an English dessert made by heating light cream with vanilla, stirring it into egg yolks beaten with sugar, then slowly blending all ingredients over heat until the mixture has a thick, sauce-like consistency. Crème anglaise is used as a family dessert to top canned fruits or any homemade baked treats, just as American chefs would use ice cream or whipped topping. This is the kind of custard used in trifle recipes, which is a pudding created from pieces of sponge cake, fresh fruits, custard and sometimes a liqueur.

Pastry cream, or crème pâtissièrie, is generally made with milk, not cream. Cornstarch is added to produce a thick custard that can be used as a filling for pies, cakes, cream puffs and éclairs. Its spoonable consistency allows it to also be consumed as a pudding dessert. Pastry cream is a pastry item that every baker should know how to make. It’s especially worshipped by French pastry chefs. It is almost a challenge to order something from a pâtissèrie that doesn’t contain it. Pastry cream makes dessert creamier by adding flavor and a smooth texture.

Sweet Fact: Pastry cream is classically flavored with vanilla but can be created in chocolate, coffee, lemon and other flavors as well.

Phyllo, pronounced fee-low, and puff pastry are not the same, but they do have a lot in common. Both are made of layered, thin sheets of low-fat wheat dough.The layers represent the “leaves” from phyllo which is Greek for “leaf,” and pâte feuilletée – the French name for puff pastry – means “leaf dough.” Both phyllo and puff pastry rise during baking as the layers separate and turn golden brown and crisp.

Phyllo sheets are somewhat dry and stored stacked on top of each other, usually in a frozen environment. The layers can be separated for the convenience of chefs who can decide on the number of layers to use. Recipes often call for brushing butter between the layers before reassemblingthem.Puffpastry,ontheotherhand,ismade of thin layers of butter trapped between the sheets of wheat dough. The layers can’t be separated before cooking. Puff pastry usually contains more layers, and generally rises higher, expanding air that forms between the dough sheets.

Puff pastry is made by hand at specialized bakeries.The method involves wrapping a brick of butter in a dough and then repeatedly rolling it out and folding it until it has many layers. Homemade phyllo recipes are more mysterious.The paper-thin sheets of store-bought phyllo can’t be produced without specific industrial equipment.

Sweet Facts: It’s easier and quicker to make puff pastry during the winter (only requires 30 minutes in the fridge) rather than in the summer when the temperatures are high (requires 1 hour in the fridge).

Pastry is a never-ending science to learn. Understanding the principles behind the craft and the variations of existing confections helps clarify common misunderstandings and educate consumers on what they are biting into. Remember that no one is born a chef – pastry is a field where knowledge and practice makes perfect.