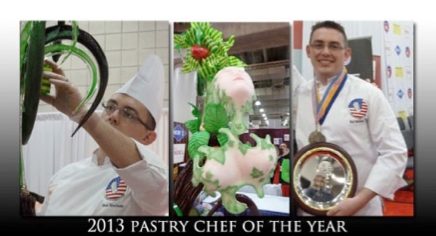 The U.S. Pastry Competition is one of America’s most prestigious pastry competitions.The event allows leading pastry chefs to showcase their talents by creating advanced dessert and chocolate bonbon recipes exhibited along with highly technical sugar and chocolate sculpted showpieces. This year’s showpiece theme was Women.

During the past year, Shelton prepared for the competition by practicing over 15 hours a week and countless hours on the weekends. Shelton was compelled to do “Origins” – a chocolate art showpiece designed around Eve, the first woman mentioned in the Christian Bible.The young chef describes his choice, “There was no better way to encompass what I thought of women and how to illustrate them than Eve. It just seemed like a good route to go.”

Shelton defines the key to his success simply as practice. Shelton also credits foam peanuts and bubble wrap as contributing factors to his win – the packing supplies helped protect fragile elements of his chocolate and sugar composition during travel from North Carolina to New York for the competition.

Shelton’s motivation was his own personal set of standards,“I hold myself at a certain standard, and if I feel like I didn’t perform to that standard, or the standard we [PreGel AMERICA] uphold, then I embarrass myself.”

Shelton doesn’t describe his standards as unrealistically high, only winning level.“I set the goal to win, and I went up there to win. Everybody should go to a competition with the intent to win or else they shouldn’t compete.” The unwavering dedication, focus and discipline Shelton displayed throughout nine months of practice was highlighted during three tedious hours of precisely constructing his sugar and chocolate showpiece in a room filled with hundreds of people and hot lights. Shelton’s persistence did not go unnoticed by the Board members of the Societe Culinaire Philanthropique, one of the oldest and most prestigious chef associations in the world during the judging procedure.

As the recipient of the title Pastry Chef of the Year, Shelton received a $4000 cash prize, a gift certificate from TechnobakeTM, distributor of culinary tools and apparel for chefs and bakers, a plaque and pending recognition in achieved industry publications such as So Good, Food Arts, Pastry and Baking North America and Dessert Professional. Shelton was also offered an invitation to return as an official judge in the U.S. Pastry Competition 2014.