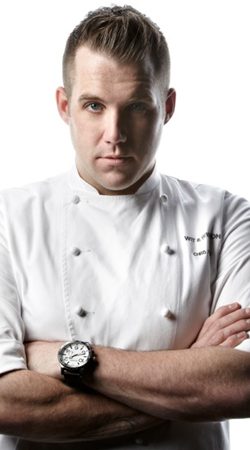 Pastry Chef Chris Ford of Wit & Wisdom in Baltimore, MD, took top prize at the Chicago Restaurant Pastry Competition. The fourth and final episode of Season Two can be viewed at www.jmpurepastry.com.

Ford, pastry chef at Wit & Wisdom in Baltimore, MD, and one of the StarChef ’s “Rising Stars” in the DC area, was named the winner of the Chicago Restaurant Pastry Competition because of his ingredient-centric and innovative style and focus on creating nuanced desserts by layering delicate flavors. “All four contestants of the second annual Chicago Restaurant Pastry Competition exhibited superior skill both in creation and presentation,” said competition founder Jimmy MacMillan of JMPurePastry. “Chris’
final dessert was selected as the winner because of its textures, techniques, intense flavors and dramatic plating.”

“My desserts are always soft and sensual, nothing very aggressive,” says Chef Ford. “I want the dessert to be flavorful and memorable but not overwhelming.” His creations are known for their original flair and mastery of complex ingredient pairings. Ford’s winning dessert was a black sesame sherbet with black genoise, bittersweet cremeaux, cocoa meringue and violet jelly. Ford used flavors from the Nielsen-Massey Vanillas line of products to add depth to his dishes. Judges praised his textures, techniques, intense flavors, and dramatic plating. 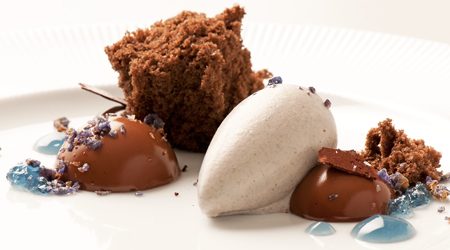 The Chicago Restaurant Pastry Competition was a single-day event where four chef finalists were asked to prepare eight servings of an original creative, plated dessert. The chefs also competed in a mystery challenge where they were asked to create an inventive molded gelato. The competition has been nominated for a 2013 James Beard Media Award and its founder Chef Jimmy MacMillan has been named one of Dessert Professional’s “2013 Top Ten Pastry Chefs in America,” which will be announced in the magazine’s June issue.

Season One’s competition was won by Chicago Pastry Chef Sarah Kosikowski, East Coast Corporate Pastry Chef for Valrhona. The program featured Chicago chefs and earned a 2012 Chicago Midwest Emmy award. The 2013 season drew pastry chefs from all over the United States, and the 2014 competition will feature chefs from around the world. The Chicago Restaurant Pastry Competition is now accepting submissions for 2014 Season Three: International Chefs.