Imagine you are walking through the aisles of your local grocery store, and you find yourself in front of two choices of salmon: one of them is a vibrant pinkish-peach color that looks like it was just plucked out of a freshwater stream; the other carries a similar bright and juicy pink-peach color but not as striking as the first. Most people would go for the first because it appears to be the freshest and most desirable option. But why is that? What message does color send to our brains to steer us towards making these choices?

According to WWF, salmon aquaculture is the fastest growing food production in the world, with 70 percent of the market, which makes freshly caught salmon each time rarer to find. The difference between the two is that, the color of wild salmon occurs because of the natural plankton and other organisms they eat in wild life, while farm-raised salmon is fed a special type of food which contains colorants to give the fish the color consumers desire in order to make the purchase. Farmed salmon without colorants would be grey, and therefore not as appealing to customers.

Understanding the composition of food products with the reality of what quality entails can help consumers decifer what constitutes better taste and health in what they choose. Food manufacturers have been adding food coloring to their products for decades. Over the years, transparency over what is added to food has become a hot topic. Exactly what is “good” and what is “bad’”straddles a fine line, and colorants are often caught in the middle of this debate.

More than a Personal Choice, a Natural Survival Behavior
In prehistoric times, Homo sapiens learned how to survive and find food for themselves in nature; therefore, humans developed the skill of recognizing food quality by its color, smell and consistency. This ancestral behavioral heritage in our brains remains to this day, thousands of years later. The human brain can recognize “good” taste as well as the presence of certain nutrients and even medicine, according to “How Food Companies Fool Customers with Food Coloring Ingredients Made from Petrochemicals” by Mike Adams. For example, the red color of an apple peel is a sign of the healing powers of fruit, and this is why the human brain tends to select the brightest red apple in an entire batch.

Our perception of color has evolved into such an unconscious and instinctive selection that the modern population doesn’t even consciously consider what looks good and what tastes good anymore. According to Adam Burrows in his paper “Palette of Ours Palates: A Brief Story of Food Coloring and Its Regulation for the Comprehensive Reviews in Food Science and Food Safety,” specialists have known for a long time that color has great importance in the taste and overall perception of food. Burrows cites the Crystal Pepsi case as strong evidence of this tendency. In 1993, Pepsi launched this revolutionary product that was supposed to be such a success that Coca-Cola and other leading beverage companies tried to create similar products to compete with it. Unfortunately, the clear cola-flavored soda was an utter failure and it was unable to find a home among American customers’ palates. No one wanted to drink a clear-colored cola soda, despite the fact that its taste was identical to regular soda. This is the same principle that makes salmon farmers add colorants to the fish’s diet.

In addition to food coloring being inserted into raw products such as fruits and vegetables, food companies also add dyes to manufactured products for a wide range of reasons. Customers expect a cherry cream to be red, just like cherry peels; however, raw cherries, when crushed, adopt a brownish color, which isn’t appealing to customers’ eyes. This causes the industry to add red dyes to the final product in order to sell it. Another example is in pistachio flavored products. People have the idea that pistachio-derivatives have to be green; however, the purest type of pistachio paste, with no color additives, carries a brownish color that surprises and pushes away people that think it is not as good or real. Customers seek out perfect looking items, but what Mother Nature produces is not always symmetrical. Intermarché, a French supermarket chain, launched a campaign called “The Inglorious Fruits and Vegetables” to help sell the 300 million tons of “ugly” fruits and vegetables that typically would go to waste every year, only because of their appearance. There is an unfortunate disconnect between what we believe to be healthy appearances and colors, and what is found in nature.

Not only the product’s color and shape, but also the packaging color, area where it is displayed, signs, music and smells can be used as techniques to influence the customer’s decision-making process when shopping for food or for any other goods. The article “The Art of Styling a Dish: How to Create Envy Through Food Presentation” from Eatwell 101, presents some of the techniques used to make food look more desirable. The tips range from placing food on a white plate so patterns and colors on plates won’t be distracting, to consistent looks, decoration and garnishes. There are professionals who specialize in styling and positioning of not only foods but also store products in general, a whole industry dedicated to getting into the customer’s subconscious. 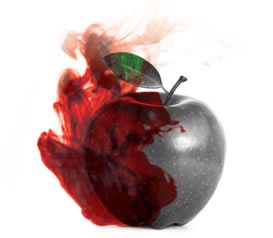 Are Food Dyes Bad For You?
Since it is for the sake of making food look better, we generally accept (or simply don’t notice) food coloring in what we eat. It really wouldn’t be a problem if certain types of coloring inserted into foods weren’t harmful to people’s health. But, here is the catch: there are two types of food coloring that can be used – natural food coloring and an artificial (or synthetic) food coloring.

As the name implies, natural food coloring is made of natural raw materials like beta-carotene (a precursor to vitamin A), paprika, beet juice, turmeric and others, all of which are nothing more than nutritious foods that have a bright color and can serve as a healthy dye for recipes when the color is extracted from them.

However, Not all natural dyes are good for your health. In his video, “Are Artificial Colors Harmful?” Dr. Michael Greger, M.D., shares that the most popular red coloring for food is called “carmine” and comes from a crushed pregnant bug called a cochineal beetle. A bug can’t be artificial, but even though it is natural it can be harmful for people with allergic reactions and sends hundreds to the emergency room every year. The Food and Drug Administration (FDA) hasn’t banned this category of coloring yet because allergies can also be caused by a number of other food items, but it has required that all product labels name carmine in their ingredient list. Before this, food companies would only mention “color added,” which made it harder for people to recognize the substance. Besides the allergy aspect, no other health risks are known from carmine ingestion, says Live Science’s article “The Truth About Red Food Dye Made from Bugs.” The only other ones who should keep an eye out for this dye are people who maintain a kosher diet or choose not to eat animal products.

Artificial food coloring was originally produced from coal tar, but now primarily comes from petroleum, according to the report Food Dyes A Rainbow of Risks released by the Center for Science in the Public Interest (CSPI). Different shades of coloring can be achieved when burning coal tar. The amount of time and the temperature chosen are some of the factors that affect which color will result from this process. The petroleum dyes are often created from a base made with the byproducts erythrosine and tartrazine, among others, according to the article from Wise Geek “What is Food Coloring Made Of?” This base is highly refined and can be manipulated later in order to produce other combinations of colors that will have hardly any residual petroleum in the product. Complex chemical reactions are key for synthetic dye production processes.

The question why would people even consider producing something made of petroleum instead of the natural choice has a simple answer: artificial dyes are brighter, more stable and cheaper than natural coloring.

Yes, Artificial Food Dyes Are Legal
The same study by the CSPI sheds light on the nine types of food coloring in the United States that are certified by the FDA. The list used to be longer, but many other types were banned, such as Violet No.1 for example – banned because it was found to cause cancer in animal studies. Blue 1, Blue 2, Citrus Red 2, Green 3, Orange B, Red 3, Red 40, Yellow 5 and Yellow 6 all comprise the approved list. Dr. Greger’s article, “Food Dyes and ADHD,” features a study that shows that artificial colors increase hyperactivity and impulsivity in children. The British government banned these dyes after the study was released, and the European Food Safety Authority started requiring that products containing such substances put warnings on their labels about the possible effect on kids’ behavior. However, the U.S. still permits them to be used in the same products. The FDA justifies this because a committee analyzed the same study, but found the behavioral changes consistent with the regular actions of young children and not on a level that would be considered as ADHD.

The Bottom Line Is …
Color in food matters. Even natural ingredient colors can change depending on the processing of raw materials before the final product is ready, so adding a little more color, flavor or beauty to foods is not such a terrifying idea. However, there should be conscious choice of what substances are used to accomplish this. It is important to give foods a desirable appearance and taste, but it should be each individual’s choice to understand which “price to pay” for it. Governmental organizations are present to help protect our health, but it will always be necessary to take matters into your own hands and be mindful of what we are ingesting or offering to your clients.