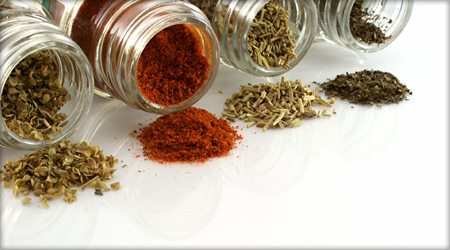 They say that variety is the spice of life, and there certainly is a lot of variety among spices. While some such as cinnamon, nutmeg and ginger have become familiar household names, a few spices remain fairly elusive and unknown to the general public. Some of these often underutilized spices offer incredible flavor and an eclectic flair – sure to impress even your most discerning customers’ palates. Here’s a little background and guidance on how to enhance your product line just a teaspoon or two at a time.

Most often the secret ingredient in your grandmother’s favorite apple pie or gingerbread, cloves are valued for the aromatic and warm flavor they provide to sweet and savory dishes. Cloves are the unopened, dried flower buds of the evergreen clove tree1, and their resemblance to a small nail is how the name “clove” derived from the Latin word for nail – clavus.2 Cloves can enhance and complement other spices such as cinnamon and nutmeg, and they pair exceptionally well with fruits and citrus. Because of their potency, cloves are best used in moderation as to not overwhelm the finished product.

Don’t let the name fool you – contrary to popular belief, allspice is not a mixture of “all” (or any) spices. The name is derived from its aroma, which tends to smell like a blend of cinnamon, clove, ginger and nutmeg.3 In other parts of the world, you may find whole allspice labeled as “pimiento,” since Spanish explorers originally mistook the spice to be black peppercorns (called pimienta in Spanish). The tree that produces the allspice berries, which are dried until their skin appears dark and wrinkled, is indigenous to South and Central American rainforests, and allspice is in fact the only spice grown exclusively in the Western Hemisphere (the finest of which now comes from Jamaica).4 Just like its aroma, the flavor of allspice is reminiscent of the other mentioned spices, with the addition of a slightly peppery overtone. Allspice is traditionally used in savory meat and soup recipes, while on the sweeter side of things it is a complement to cakes, fruit pies, ice cream, puddings and mulled beverages.

One of the world’s most ancient spices, cardamom can be traced back as far as Egyptian times, when the seeds were chewed as a tooth cleanser, and to Greek and Roman times, when it was used as a perfume.5 Today, this precious spice is a cherished and expensive one – second only to saffron. Cardamom is derived from a plant similar to ginger and is found in a small, oval pod that contains tiny seeds. The flavor of cardamom is warm and slightly exotic, with notable undertones of lemon and eucalyptus. Very common in traditional Eastern recipes, cardamom is used in many rice dishes, pastries, breads and custards. Cardamom is exceptional when added to coffee grinds prior to brewing.

If someone has ever told you that coriander is like parsley, they weren’t just pulling your leg – it is in fact the seed of the cilantro plant, all part of the parsley family. Because of these roots, ground coriander has a somewhat herbal flavor, with sage and citrus notes. One of the first spices to arrive in America, coriander can actually be traced as early as 5,000 BC, and is referenced in Old Testament writings.6 Coriander is rather mild and sweet, and therefore is complementary to some of the more aromatic spices. The brittle seeds can be easily ground with a mortar and pestle – allowing you to take advantage of buying whole, fresh seeds with minimal grinding effort required. Whole seeds keep indefinitely, while preground coriander loses its aroma quickly. A dominant component of curry powders, coriander is often found in stews and marinades, while its presence in garam masala (a typical Indian spice blend) allows it to appear in many cakes, breads and other baked goods.7

If you’re about to say you’ve never had anise, first consider if you’re the one who takes all of the black jellybeans out of the mix. The oils from the anise plant are distilled and used as the flavoring for licorice candy. Anise has an interesting and somewhat amusing history, including its use as a digestive aid in Roman times, a taxable drug in 14th century London as a way to fund the London Bridge, a way to ward off nightmares if placed under one’s pillow, a breath freshener, a cure for hiccups, a cough expectorant and an attractive scent to our canine friends.8 Anise seeds are small, ribbed and grayish-brown in color, with a flavor very reminiscent of fennel and, of course, licorice. Not the same as star anise (a classic Chinese spice), anise is most common in cakes, pastries and rye breads, where it is generally used whole. Anise pairs quite well with lemon, and provides a delicate flavor to baked goods.

As you can see, the history and folklore behind spices are as rich as their flavors and aromas. To best preserve these intense flavors, it is ideal to store spices in airtight containers, out of sunlight. When possible, buy seeds whole and grind when needed (some seeds may also be roasted to intensify their flavor). Whether as a precious commodity, a medicinal remedy or simply a way to brighten your morning coffee, spices can be a creative and unique way to enhance and diversify the flavors in your gelato and pastry product lines.