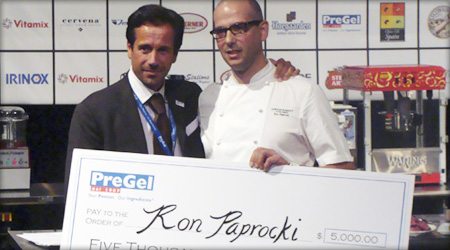 The pastry chefs of New York City continue to thrive and make headlines, and such was case the moment Ron Paprocki of Gordon Ramsay at the London, NY, was named the 2010 StarChefs.com International Pastry Competition winner. Presenting the final round elements that included a chocolate showpiece, bonbons and an entremet, Chef Paprocki found himself receiving top honors from world-renowned judges Johnny Izzuni, Jaques Torres, Albert Adria, Jeffery Steingarten, Elizabeth Faulkner and Wylie DuFresne. While the presence of the judges was enough to excite any pastry chef, Chef Paprocki did not go home empty-handed. PreGel, founding sponsor of the competition, surprised Chef Paprocki with a $5,000 check, and he also received a trip to Paris from Bravo North America and a trip to Costa Rica compliments of Belcolade.

Founding sponsor PreGel AMERICA’s CEO Marco Casol had nothing but praise for the competition, “I think this competition has been a very unique experience for all of us involved. The competition is innovative in that it asks the contestants to do what they do every day in their restaurants, and I believe we were all impressed to know that across America, these chefs are raising the bar for desserts.” Chef Jacques Torres echoed this feeling by saying, “They’ve helped the profession to move ahead.”

Chef Paprocki wasn’t the only winner as runners-up Ian Gresik of Drago Centro, Los Angeles, CA, and Chris Ford of Trummers in Main, VA, were also commended for making it to the third and final round of competition. The top three competitors all received a Hobart Mixer and $2,000 Carpigini voucher. From an original field of 20 competitors, Paprocki, Gresik and Ford showcased their talent through each subsequent round of the three-day competition. To advance to the finals, the chefs had to compete against 10 others in the plated dessert portion of the competition, which required the use of PreGel’s Fig Arabeschi®, a selection of one of three Wisconsin Cheeses and use of Koerner’s cotton candy machine with PreGel’s Magic Sugar. From an Aerated Pistachio Custard with Cognac Custard, Fig Sauce, and Pineapple and Microgreens Basil Cotton Candy, to Les Frères Mousse with Olive and Honey Cake, Cognac Ice Cream, Figs, Champagne, Sage and Honey, and Vanilla Cotton Candy, the top contenders presented unique and versatile plated desserts.

The StarChefs.com International Pastry Competition presented by PreGel was held in conjunction with the fifth annual

StarChefs.com International Chefs Congress. Over three days, 20 of the industry’s top pastry talent went through three elimination rounds to determine the winner. The competition was designed specifically with the fine dining restaurant pastry chef in mind and focused on elements critical to the execution of a well-rounded dessert menu. For a full recap of every round of the competition, visit www.StarChefs.com.