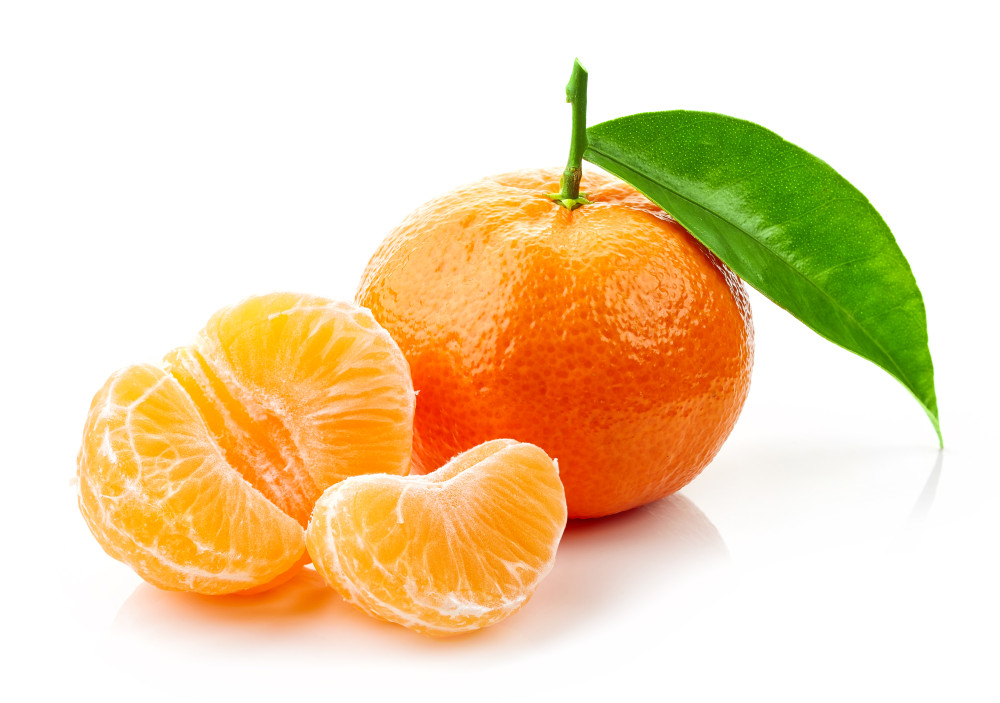 This isn’t an orange? Nope, it’s a tangerine. Don’t worry though, you are not alone in your confusion. Most people don’t really understand the difference between the tangerine and its cousin the orange. According to www.britannica.com, oranges and tangerines belong to the same Citrus species and family of Rutaceae, along with lemons, limes, grapefruit, and citron. However, like with all relatives, there are some very distinct differences. As explained on www.livestrong.com, there are not only differences in their size and shape, but also in their taste and nutritional benefits. The tangerine is smaller than the orange, which is second in size to the grapefruit in this family. And while both fruits are sweet, the tangerine is less tart than the orange. They both have an oily outer skin, yet the tangerine’s skin is thinner and at on the ends in comparison to an orange, and the orange often has a “navel”. The tangerine’s shape and thin skin makes it easier to peel than the orange, however, the orange packs quite a bit more vitamin C and fiber in its punch.
While we are on the subject of family, let’s discuss the different varieties and hybrids of the tangerine.
Tangelo: (aka honeybell) is a bright red-orange hybrid of the tangerine and grapefruit, or pomelo. This variety is easily recognized by the little knob at its stem, as well as by the fact that it has “loose” skin, a juiciness, and a sweet flavor similar to the tangerine.
Clementine: (aka Algerian tangerine) is a hybrid of the tangerine and sweet orange. This variety is even smaller with a smooth and glossy skin, and is very sweet and juicy, as well as almost seedless.
Tangor: (aka temple orange/royal mandarin) is another hybrid of the tangerine and orange. This variety is larger in size and has a sweet- tart flavor similar to the orange.
Dancy tangerine: (aka Christmas Orange) is no longer widely grown, but became known as the Christmas Orange due to its peak season being in December and it often being added to children’s Christmas stockings.
Meyer Lemon: is a hybrid of the lemon and tangerine. This variety comes from China and is mostly grown as a decorative tree, however, it is a sweet and fragrant edible fruit.
Calamondin: is a hybrid of a tangerine and a kumquat. While the peel and aroma are quite sweet, the fruit itself is quite sour.
Ugli fruit: (aka Jamaican tangelo) is the hybrid of a tangerine, grapefruit, and orange. The name ugli fruit is due to the fruit’s less than attractive appearance, with a rough, wrinkled, greenish-yellow rind.
Tangerines came to the United States by way of the its namesake, the Moroccan port of Tangiers, in the 1800s, but they had been cultivated and grown in China and Japan for over 3,000 years prior to being introduced to Europe and the Americas. Actually, the majority of the world’s tangerines are still produced in China today. This fruit is not only popular in China, but also considered to be good luck and symbolize wealth because the color is similar to gold. In fact, in Chinese the words for “tangerines” and “luck” sound similar, and according to www.cultural-china.com, the gift of a tangerine in this culture is associated as having an abundance of happiness and prosperity. Today, this fruit is very popular and widely grown in many other parts of the world as well, including Spain, Italy, Brazil, the United States, Japan, the East Indies, and Australia.

Like other citrus family members, tangerines may be small, but they are packed to the brim with nutritious properties. Some of its main health benefits include the following:

• Low in calories
• High in antioxidants
• Rich in vitamin C
• Good source of beta-carotene
• High in folate and vitamins B1, B2, and B3
• Rich in potassium and magnesium
• Contains both soluble and insoluble ber
• Tangerine oil is used for medicinal purposes in naturopathic healing practices

While the tangerine is most commonly consumed by peeling and eating the juicy segments by hand, it is a very versatile fruit that can be used in both sweet and savory dishes. From salads to soups to breads to frozen desserts, the tangerine has a refreshing flavor that is sure to both enhance a meal and satisfy the palate. Almost every component of this fruit can be used to make delicious recipes. The rind can be used as zest to add a delicate yet bright flavor to confectionery items and baked goods such as cakes, biscuits, pastry cream, ice cream, gelato, breads, etc. Or you could make sweet candied tangerine peels to add as a garnish to recipes or just to enjoy on their own. Lastly, tangerine juice can be consumed as a refreshing drink or the juice can be used in sauces, syrups, marinades, and more.

So whether you are looking for a little extra luck or just a delicious and refreshing snack, now you know the tangerine is an excellent way to go!