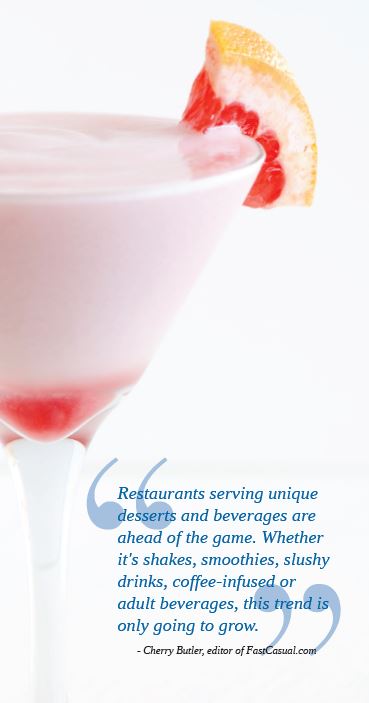 Drinks and desserts, two of the hottest categories in the Foodservice Industry, are crossing over – inspiring and influencing each other and perhaps creating a new category altogether with dessert drinks. As we continue to see dessert-inspired drinks and drink-inspired desserts, the industry has a world of possibilities to innovate and surprise consumers reinventing what it means to have dessert and beverages.

According to the 8th Annual Fast Casual Executive Summit that took place in October of 2013 in New Orleans, restaurants who innovate in the beverage and dessert section of the menu are seeing increased traffic and higher transactions. Cherry Butler, editor of FastCasual.com stated in the article “Beverage, Dessert Innovation to Open Fast Casual Executive Summit” that they have been tracking this trend and “restaurants serving unique desserts and beverages are ahead of the game. Whether it’s shakes, smoothies, slushy drinks, coffee-infused or adult beverages, this trend is only going to grow.”

Where to start in developing the best hit in the dessert-cocktail mash-up world? The answer is in the same place that bartenders do – deconstructing the end result. Mixologists often start a great cocktail with the main liquor and construct around it. Mark Halberin stated in QSR magazine’s article “A Tip From the Bartender” to consider the notions of using dairy and grains to make soft drinks a meal, starting with coffee and adding flavor or delivering a drinkable dessert.

Mexican smoothies, more commonly referred to as licuados, usually have dairy such as yogurt or oats and grains to make the drink more like a meal. Coffee is another highly personalized alternative that has been offered widely in the industry, and liquid desserts such as crème de cacao, chocolate liqueur and flavored vodkas are being enjoyed and gaining popularity as well.

Typically, dessert-inspired cocktails are consumed either before dinner as an aperitif or are ordered after dinner as a nightcap, or both, which incrementally increases sales. Operators are seizing the opportunity and have bridged the gap between pastry chefs and bartenders. Furthermore, some of these dessert cocktails have proven to move liquors that are somewhat difficult to move otherwise, claims Scott Schilvers, general manager of New York’s Columbus Tavern in the article “Cocktails Add a Sweet Note” on StateWays.com. He shares, “The Agave Kiss, priced at $12, for instance, a mixture of Herradurra Silver Tequila, Chambord, crème de cacao and heavy cream, garnished with chocolate flakes and raspberries, is one example.”

The visual presentation of dessert cocktails make them very appealing for patrons, especially when advertised on menus, POPs or when a close-by table orders one. “Cocktail menus do move drinks and liquor that people ordinarily would not think of ordering,” said Schilvers.

By the end of 2013, however, not all was good with the spirits’ relationship with sweet flavors. Bartending expert Dale Degroff stated in an interview for liquor.com that 2013 might as well have been the year of the flavored spirit, pointing to a flavor fatigue in the industry. “There are literally hundreds of flavored spirits and even more in the works,” he stated. ”I have to admit, my heart sank when tequila fell prey to this trend. I hoped for some restraint in the agave category, but just Google ‘flavored tequila,’ and you’ll weep. Then I tasted Avión Espresso Tequila, and life was good again. That is until I saw the recipe for a concoction called Red Hot Saturday Mix calling for sweet and sour mix, flavored tequila, grenadine and triple sec. All that sweetness with nothing to balance it! Listen, this is all good clean fun, but the market will sort things out in
the end.”

With an endless world of possibility it may be easy to get carried away and include too many flavors while losing some of the balance in the recipe, which is why Degroff recommends looking for simplicity in 2014.
“For years, cocktail ingredient lists were growing to outrageous lengths. Fortunately, many craft-cocktail bartenders are paring down recipes to include only things that actually contribute to the balance and the flavor of a drink.”

The Internet abounds with dessert drink ideas, but some of the top results can be found on Trend Hunter’s compilation of 43 Decadent Dessert Drinks. A cake batter martini with sprinkles, ice cream cake shots, cake vodka milkshake, liquored-up ice cream and frozen pops, and a “smoretini,” an alcoholic take on s’mores, made the top 10 on this list. English Earl Grey Tea infused crème brûlée and Beerscotti, a chocolate stout beer, are also unique recipes.

In addition to beverages being inspired by desserts to add a sweet note, frozen desserts such as gelato and soft serve have also been adopting alcoholic additives such as wines, spirits and beers. New developments in bases have allowed operators to easily incorporate alcoholic flavors that in the past had been hard to balance with the recipe to obtain an up-to-par texture. Malbec Sorbetto, Blue Moon Gelato and Margarita Soft Serve are some standout ideas to add an adult twist to frozen desserts.

The one ingredient that is slated to standout in 2014 in desserts and beverages is tea. Andrew Freeman & Co., a San Francisco-based restaurant and hospitality consulting company, foresees tea-inspired cocktails or “tea-tails” to make an appearance as mixologists look to innovate. And for desserts, green tea ice cream and green tea macarons are already popular in some hot culinary spots in the country. Furthermore, look for tea flavors in pannacottas, crème Anglaise and chocolate soufflé.

Desserts and drinks are playing off each other’s strengths and it’s a trend that will only continue to grow. Simplicity and creativity are the name of the game as the reward for new creations hitting the target is increased revenues and foot traffic for operators across the country.