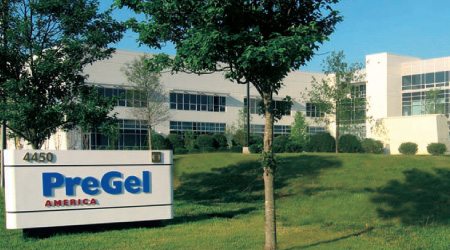 PreGel AMERICA is celebrating its 10-year anniversary! PreGel as a global company is over 45-years-old, but the commitment it made to the U.S. market started a mere 10 years ago and the journey has been a whirlwind. In honor of our anniversary, here’s a nod to 10 interesting facts about the growing company.

Ten
The number of years PreGel AMERICA has been in operation! PreGel AMERICA is celebrating its 10-year anniversary this year, after opening its doors in 2002. Whoohoo!

Eight
2008 the year PreGel AMERICA opened the doors to its brand new facilty in Concord, NC, featuring its state-of-art Professional Training Center – which has trained thousands of students.

Five
The number of years PreGel AMERICA’s magazine Views from the Tree has been in production. The first issue came out in 2008, but the project launched in 2007. We are so proud to be the exclusive magazine for specialty desserts for all of PreGel AMERICA’s customers.

Four
The number of generations that PreGel has been serving world-class specialty dessert ingredients. Founded in 1967 by Luciano Rabboni, PreGel has been operating as a family-owned company for 45 years.

Three
The number of years PreGel AMERICA has been a manufacturing facility. PreGel AMERICA is the only subsidiary that is producing product in-house in addition to what PreGel manufactures at its Italian headquarters.

Two
The number of meanings to the company name PreGel. 1. PREpared GELateria; and 2. PRE‐GELato. Bet you didn’t guess that one.

One
The number represents what PreGel has become in the last 45 years and in the last 10 in the U.S. market … the number one specialty dessert manufacturer and distributor of ingredients for gelato, sorbetto, frozen yogurt, frozen beverages, pastries and more.