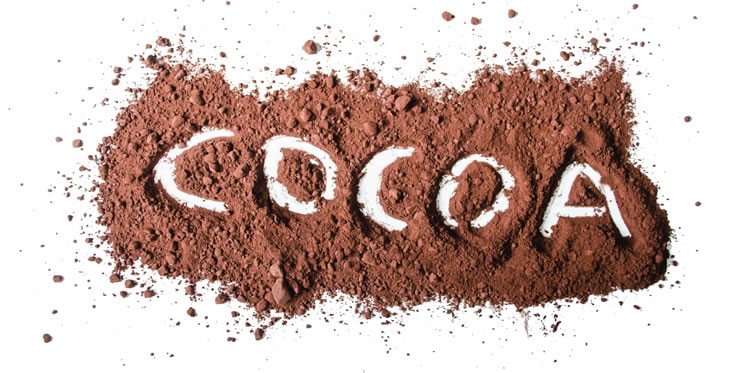 When it comes to cocoa, the Medicine Hunter Chris Kilham, summed it up right saying, “Cocoa, the food of the gods and the electuary of lovers, has captivated humanity with its exotic flavor and sensuous mouth feel. The world would be a poorer place if not for heavenly cocoa!” Chocolate has and continues to mesmerize the masses with its decadence, and one major player of its many forms is cocoa powder.

What is Cocoa Powder?
Cocoa powder is essentially a concentrated form of the cacao bean with all the flavor but a fraction of the fat after being processed through a number of stages. As the European Cocoa Association explains, raw cacao beans are fermented and dried during transshipment before arrival at the processing factory. Upon arrival, they are inspected, cleaned, mixed into the desired blend, fragmented and stripped of their husks. After these stages are complete, the inner part of the kernel, or the nib, is what remains. The nibs are then heat-treated to eliminate bacteria and subsequently roasted and ground into a liquid cocoa mass.

The resulting cocoa mass, also called chocolate liquor, is made up of about half cocoa butter and half cocoa solids. Technically this product is still not chocolate, however it is the “essence” of chocolate as it is the pure product produced from roasted and ground cacao beans and is the base for all chocolate products. The next step in the process of producing cocoa powder is to press out and filter the fat, or cocoa butter, under high pressure. Once all the cocoa butter is pressed out, it results in cocoa cakes that are approximately five centimeters thick. These cakes are then broken up and ground into a fine powder – cocoa powder.

Types of Cocoa Powder:
Dutch-Processed vs. Natural
Natural cocoa powder is made when cacao beans are simply roasted and pulverized into a fine powder. The fact that all of its acids are intact is what causes its lighter color. This is typically the type of cocoa powder found in American grocery stores. When baking, natural cocoa powder is usually paired with baking soda, because the sodium carbonate in baking soda reacts with the acid found in the powder to produce the right flavor and texture. 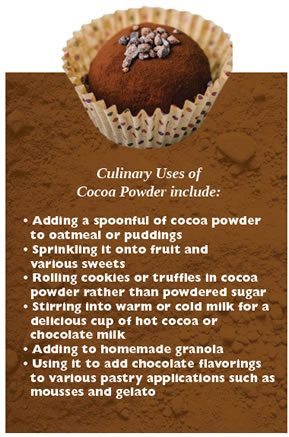 The History of Cocoa
While the exact date and origin of cocoa is unknown, the best estimate of archaeologists and historians is that either the ancient Olmecs or the Mayans first discovered the cocoa fruit in the Yucatan Peninsula or equatorial Mexico around 1500-1000 B.C. As the World Agro Forestry Centre states on its website, we have Hernando Cortez to thank back in the 16th Century for the expansion of cocoa into Europe and thereby the world. Christopher Columbus had his first glimpse of cacao beans in 1502, but did not appreciate the untapped potential value that the beans held. After Cortez brought some of this “brown gold” back to the Spanish court in 1528, the court quickly fell under the spell of the exotic elixir and adapted it to their taste by adding cane sugar, cinnamon, vanilla and pepper. Not only did they fall in love with the cocoa, but they reserved it for their exclusive uses and kept its existence a secret from the rest of the world.

Thankfully, cocoa started arriving in other European ports during the 17th Century, effortlessly conquering palates in every region in which it was introduced. In 1615, chocolate beverages were embraced by the French court after the royal wedding of King Louis XIII to the Spanish Princess Anne of Austria. In 1650, these beverages appeared in England, and for many years remained something that was reserved for the upper class. The first chocolate confection maker opened in Paris in 1659, and by 1720 Italian chocolate-makers were also receiving prizes recognizing the quality of their products. As chocolate worked its way around Europe and the world throughout the 17th, 18th and 19th Centuries, culinary and manufacturing innovations, chocolate consumption and product quality rapidly increased.

During the industrial era, cocoa production saw a slow decline in South America and increased in Africa in the Gold Coast, Nigeria and the Ivory Coast. This is also the time when two chocolate titans in the United States – Hershey’s Chocolate and Mars Co. – were born. Chocolate is now an established part of the world’s vocabulary and affordable for the masses.

Medicine of the Gods
Jean Anthelme Brillat-Savarin spoke some truth when saying, “What is health? It is chocolate!” Throughout recent years numerous reports have documented findings regarding the health benefits of chocolate. It is, in fact, the raw and minimally processed cocoa powder itself that is highly nutritious, providing numerous health benefits. The potential benefits of partaking in chocolate include: lowering cholesterol levels, reducing risk of cardiovascular problems and strokes, improving blood flow, reducing stress, quieting coughs and preventing cognitive decline. However, chocolate, especially dark chocolate, may contain some benefits that does not make it a “health food.” Chocolate can also contain high amounts of calories, fat and sugar; therefore moderation is the key.

Cocoa Powder in Cuisine
Raw and minimally processed cocoa powder is highly nutritious and packed with antioxidants. There are some easy culinary uses without worrying about the possible negative consequences of the fat and sugar found in chocolates. Uses include: 1) adding a spoonful of cocoa powder to oatmeal or puddings; 2) sprinkling it onto fruit and various sweets; 3) rolling cookies or truffles in cocoa powder rather than powdered sugar; 4) stirring into warm or cold milk for a delicious cup of hot cocoa or chocolate milk; 5) adding to homemade granola; or 6) using it to add chocolate flavor to various pastry applications such as mousses and gelato. Some things to keep in mind when buying cocoa powder are to make sure it’s unsweetened, has a fat content (cocoa butter percentage) of 22%-24% for the best flavor and that the sole ingredient is all-natural cocoa. Once you have found your heavenly “brown gold,” make something tasty and enjoy!