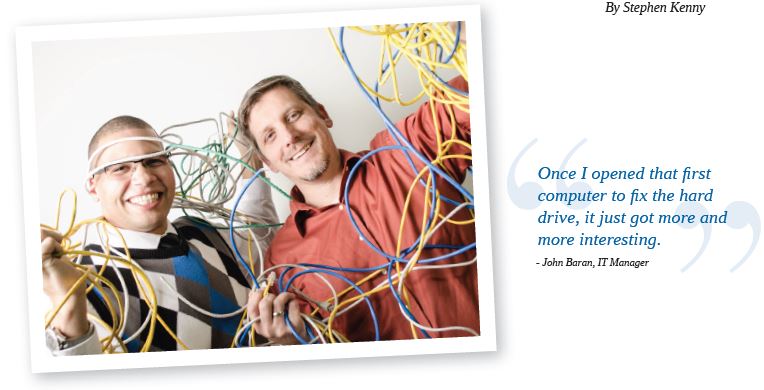 As I blissfully punch each letter of this article, my mind is at ease knowing that my Macbook won’t freeze, once again dodging the “spinning wheel of death.” Behind every functioning computer, phone and tablet at PreGel AMERICA are two men whose true passion for problem solving keeps this company connected 24/7. John Baran and Anthony Austin, are simply put, professional problem solvers. Unlike our Sales, Marketing, Production and Warehouse teams, IT doesn’t interact with our products at all. Their recipe of duties includes a larger list of technology-based ingredients such as SAP, computers, mobile devices, various software, printers and so much more. For many of us on the outside, we don’t necessarily understand what or how they do it, but what we do know is that this company wouldn’t function without their handiwork.

Baran didn’t always tinker with cables and motherboards. After fixing his own computer to save a few bucks, this former middle school science teacher decided to ditch the Bunsen burners and beakers for a career in Information Technology. “Once I opened that first computer to fix the hard drive, it just got more and more interesting,” said Baran, who is PreGel’s IT manager.

Baran’s other half, and the Mac man at PreGel, is Anthony Austin, IT assistant. Before joining PreGel AMERICA, Austin dabbled in personal training, mentored troubled youth (something that he still is active in doing) and worked in an IT Department for a school system. His love for computers started at a very young age – breaking things just to fix them, or attempting to fix them. “The more I failed, the better I got … I never feared messing up,” Austin said.

Baran and Austin are rarely at their desks. When they are, their time is spent answering phone calls, emails and handling walk-ins – pleas for help by PreGel’s technically challenged. Austin jokes, “If they knew how to do it, I would be out of a job.”

For both, IT is a position where you have to learn how to roll with what’s been thrown your way. Baran recounts one of those panic-stricken moments when an employee’s cursor was stubbornly stuck on one side of the word processor – his solution: removing the person’s day planner that was resting on the space bar.

Even after the sun sets on PreGel AMERICA, Baran and Austin are available to fix any potential server problems that could arise in the middle of the night. As IT manager, Baran monitors PreGel’s network from home and is ready to hop out of bed to solve a problem. With employees scattered across the globe in different time zones, our internal network must be in tip-top shape at all hours. “Recently, I had to jump out of bed early in the morning and travel across town in a snowstorm to get [PreGel’s] phone server back up and running,” Baran said. White-knuckled Baran watched car after car spin out on the icy roads, but he says, “I knew customers would be calling their orders in soon. So much depended on me getting the phones
back up.”

One of the job challenges both agree on is ever-changing technology. Baran and Austin share that any certification or class they took on computers in the past is now obsolete. In today’s field of Information Technology, a paper degree doesn’t mean much due to the constant shifts. They always have to stay up-to-date on the latest technology trends. When both first started IT work, the iPod didn’t yet exist – nor did Google. “You have to adapt. That’s the hardest part,” Austin said. “But it’s also the most fun part, too.”

It’s the kind of job that is seldom thought about unless your computer malfunctions. Their phone extensions are memorized by most in the company for those times of panic. The team doesn’t mind being at the receiving end of frustrated phone calls. Austin said, “It shows you that you are needed. People need you because they can’t do these things themselves. No matter how small the problem is, it’s no big deal.” Baran says that he “loves helping employees solve their everyday problems. It’s challenging, stimulating and yields a great deal of satisfaction.”