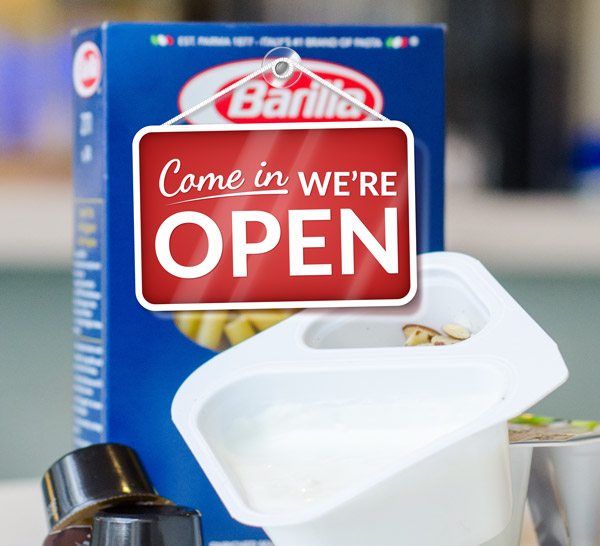 IN-STORE GROCERY BRANDS DEVELOP THEIR OWN CAFÉS AND RESTAURANTS

You have probably noticed P.F. Changs’ frozen egg rolls or beef with broccoli in the frozen food aisles of your grocery stores. However, the Asian chain isn’t the only restaurant that has brought its specialties to your microwave. Names like T.G.I. Fridays®, California Pizza Kitchen, and Boston Market have also boarded the retail product train, as other brands have been doing for quite some time. So what’s changing? Food manufacturers who are known for selling their brands in-store are taking the leap to invest in concept-branded restaurants. These independent brick and mortar locations creatively showcase gourmet presentations that are very different from their standard packaging and delicious add-ons only possible with freshly made meals. Branded products and specialized recipes are also made available which help to build brand awareness.

Amy’s Kitchen is the latest brand to embrace freshly made versions of their packaged goods in a physical location. The 28-year-old company with a $300 million revenue chose to expand out of the freezer and invest in an all-vegetarian drive thru featuring a variety of their organic items, including burritos, burgers, mac’n’cheese, chili, and more. The new fast food restaurant concept opened this past July in Rohnert Park, California. Amy’s website states that what makes them different are non-GMO, organic, locally sourced ingredients, handcrafted recipes made onsite, and gluten-free and vegan options for everything. Although the concept alone can be profitable for the company, it is also a great way to reinforce their brand’s beliefs, expose their products, and test new recipes on the market with real customers before investing in large-scale production. In an interview for the website www.eater.com, Paul Schiefer, Amy’s director of restaurant operations, shares that their restaurant has already provided the company with inspiration for a new frozen item, even though it has only been open for a short time. Their macaroni and cheese topped with the brand’s canned chili is not an official item on Amy’s menu, but became a popular request since the restaurant also carries chili. Because of this, the company decided to launch a frozen version of the dish.

Amy’s might be the latest food product company to open a branded restaurant, but it was definitely not the first. A number of other brands have already opened functioning restaurants and didn’t stop with one location. Nespresso, an operating unit of the Nestlé Group, is a great example of this, having opened its first Nespresso Café Boutique in Paris in 2000. By the end of 2014, the brand showcased 410 boutiques around the world, according to the company’s corporate statements. These successful locations serve light menu options for breakfast, lunch, and dinner, as well as a variety of espressos, coffees, and espresso-based beverages.

In company with Nespresso’s example, Barilla, the Italian pasta manufacturer, also joined the “build-your-own-restaurant club” in 2013 when they launched the first Academia Barilla Restaurant in New York City. According to the brand’s official website, www.barilla.com, the business model brought high quality ingredients, Italian dishes, fast service, and the enjoyment of a great meal into their restaurant concept, and it now has two locations in NYC.

Moving from frozen to refrigerated supermarket brands, Chobani, the number one Greek yogurt seller in the U.S., growing from a $1 million to $1 billion annual revenue, has also made the transition to the restaurant environment. Chobani Soho, a Mediterranean-inspired café, opened in mid-2012, and since then has been offering creative food options featuring their star ingredient, Greek yogurt, in all of their recipes. If you think this means only sweet items make up the menu, you’re wrong. The signature restaurant located in New York City also provides a variety of savory options such as the Spinach + Garlic Dip served with simit chips, Smoked Salmon + Herbed Labne Simit Sandwich, and Turkish Red Lentil Soup.

Similar to the example of Amy’s Chili Mac & Cheese success, the Chobani Flip (Greek yogurt packed with crunchy toppings) ended up at the grocery store thanks to the success of the variety of Greek yogurt combinations available on Chobani Soho’s menu, according to Chobani’s vice president of corporate communications Michael Gonda.

As the aforementioned examples suggest, branded restaurants, cafés, and store concepts can be considered another profit avenue for companies, but they are more so effective strategic marketing and great product development tools that offer customers a direct, real-time experience with their brands.