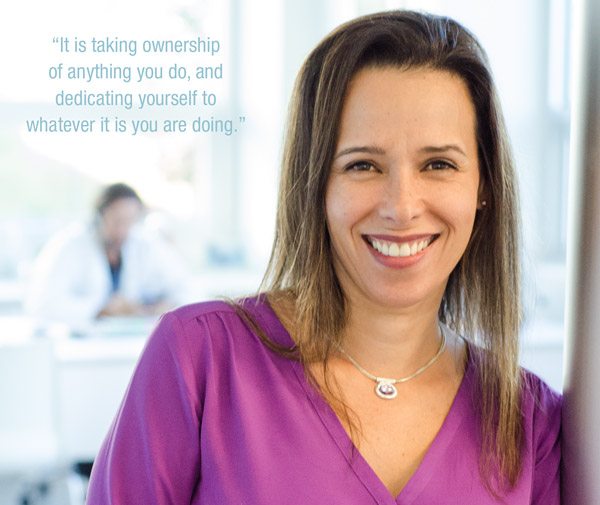 It is a twelve-year-old company, heads six subsidiaries, hosts countless meetings, welcomes a myriad of VIP guests, receives multitudes of students in its International Training Center, operates five busy days a week, employs over 100 people, and has one Ligia Pearson. As the leading manufacturer and producer of specialty dessert ingredient solutions in the United States, PreGel America maintains its position as a front-runner in the foodservice industry thanks to the professionalism of its entire staff and the tenacious support of the company’s not-so-secret weapon – Ligia (pronounced Leé-hee-ah) Executive Assistant to the CEO & President, otherwise known as PreGel’s Anything & Everything Extraordinaire.

With Ligia being a charismatic personality who is naturally charming and personable, the company she keeps closest at work reflects the same reliability and ever-ready dependability she possesses, “Outlook reminders and Post-Its are my BFFs,” the native Venezuelan jokes when referencing how being organized is a key factor to doing her job efficiently. Ligia also credits being surrounded by great managers and employees to helping her juggle the multiple hats she wears to perform her position, namely a magician’s hat, for when she seems to “magically” make things happen; a detective’s hat for figuring out daily conundrums; and a firefighter’s hat for all the “fires” she puts out with grace and the infectious smile she’s known for.

Ligia was introduced to PreGel in January 2011 after being approached by a headhunter, and has since been governing countless tasks, including balancing the copious schedule of PreGel’s CEO – a sometimes stressful exercise. Nevertheless, one particular ritual aids Ligia through her demanding days – “Keep calm … and just breathe,” says the dedicated assistant, who can barely choose which aspect of performing such an important job is her favorite. “I truly love my job so it is difficult to pinpoint just one thing,” Ligia humbly shares. “Having an awesome boss helps a lot,” she adds with a smile. “Every day is different for me. But I would say our cultural diversity is an aspect that I really enjoy.”

However, when one is cognizant of almost everything relating to the company, one could argue that the task can feel overwhelming at times. Ligia would agree, though she chooses to focus on a more encouraging outlook. “It’s a big responsibility and I feel very honored and humbled to be entrusted with certain things,” she begins. “If I care about these things as if they were my own, then I protect them fiercely, which comes second nature to me,” continues the resolute aide, who, as a devoted wife and mother is no stranger to protecting that which is important to her.

Taking lessons from the pages of her father’s book on amazing work ethic, Ligia proves daily that her work logic is dependent on two very important things. “It is taking ownership of anything you do, and dedicating yourself to whatever it is you are doing … invest yourself into it wholeheartedly,” affirms the studious employee, whose return on investment is paying off.

“I’ve said this before to many, and I can say it again, PreGel is a pretty amazing place to work. I’ve had other jobs before but I can confidently say I am so happy to be able to come to work for a company that is the leader in the industry, with fantastic people, an amazing culture, great benefits, and not to mention this spectacular facility… and never a dull moment!” raves the grateful Anything and Everything Extraordinaire.

Though Ligia admits this unique nickname was self-imposed as a joke, her positive attitude is the very reason why such a moniker has been rightfully earned, as she proves in one simple statement, “If something lands on my lap, I just run with it!” Sounds like the behavior of a true Anything & Everything Extraordinaire.